Dozens of Turkish lawyers accused of terror links remain in police detention after dawn raids on their homes in Ankara on Sept. 11, drawing criticism from international human rights groups. 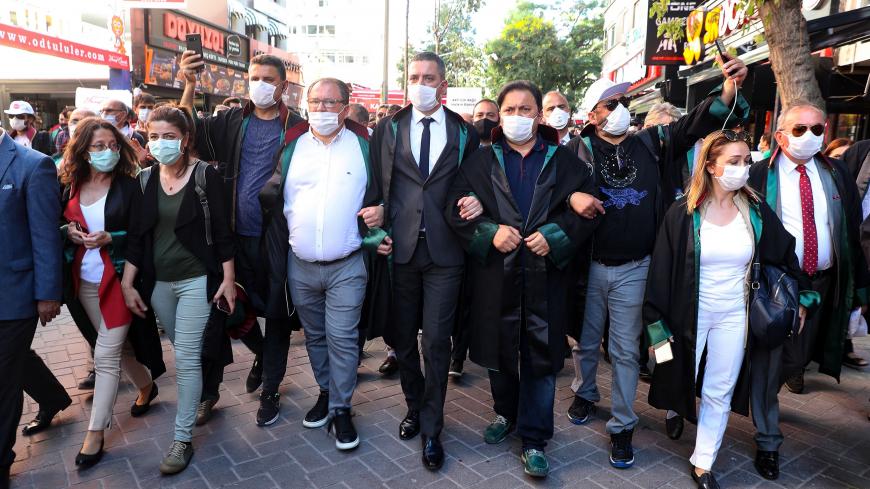 Protesting lawyers lock arms as they march during a demonstration against a government draft bill on changing the system of bar associations on July 10, 2020, in Ankara. - ADEM ALTAN/AFP via Getty Images

ISTANBUL — A growing chorus of international human rights groups are raising concern over the ongoing detention of dozens of Turkish lawyers suspected of fostering links to a terrorist organization through their professional activities.

At least 47 Turkish lawyers were taken into police custody during dawn raids on their Ankara homes on Sept. 11 on allegations they were using their legal practices to support followers of the US-based cleric Fethullah Gulen, which the Turkish government has accused of orchestrating the 2016 coup attempt.

As of Wednesday, all but two of the lawyers under investigation remained in police custody and were undergoing interrogations regarding their contacts with clients and colleagues. Rights advocates said the investigations were targeting lawyers for representing clients accused of terror links, adding the operation threatens suspects’ rights to legal defense and broader rule of law norms in Turkey.

“Equating lawyers with the profile of those they are defending is a really, really dangerous path to go down, and it absolutely contravenes the principles of what the role and function of a lawyer is,” Emma Sinclair-Webb, Turkey director for Human Rights Watch (HRW), told Al-Monitor.

According to a briefing by the Ankara chief prosecutor’s office, about 60 suspects are being investigated in Ankara and seven other provinces for alleged links to the Gulen network, which the Turkish government refers to as the Fethullah Gulen Terror Organization, or FETO. One suspect who was detained and later released told HRW police detained her at 5:30 a.m. Sept. 11 and confiscated electronic devices from her home.

The lawyers who remain in police custody, which can be extended through court orders up to 12 days under Turkish law, are being held in cells with poor air ventilation amid a growing COVID-19 outbreak in Ankara, posing a potential health risk for the suspects, according to an HRW report.

The Ankara Bar Association released a statement Tuesday alleging the lawyers’ rights had been violated in the process of their detentions.

“The houses of the suspected lawyers were searched without calling the representatives of the bar association, resulting in a clear violation of the law,” the bar association said. “Phones were seized at dozens of addresses without allowing the lawyers to call their lawyers.”

The operation comes after Turkish President Recep Tayyip Erdogan delivered a speech during an opening ceremony for the judicial year Sept. 1, in which he called for the suspension of lawyers accused of terrorism links.

“We will do what is necessary to cut off the bloody path from attorneyship to terrorism,” Erdogan said during the ceremony.

Nate Schenkkan, director for special research at Freedom House, said the latest wave of arrests was a continuation of pressure on the legal profession that has been ongoing since the 2016 coup attempt.

“What is especially disturbing in this wave of arrests is that lawyers are being arrested based on the accusations their clients face. This undermines citizens’ rights to defend themselves in court,” Schenkkan told Al-Monitor. “It is a continuation of the evisceration of due process that has occurred in Turkey over the last decade.”

Earlier this summer, Turkish lawyers led nationwide protests against a bill that would restructure bar associations in the country. The legislation passed July 11, and Schenkkan described the measure as “part of the same picture by which the government seeks to erode one of the last bastions of effective, independent civil society.”

The developments also follow the death of a hunger-striking lawyer, Ebru Timtik, in late August. Timtik had been convicted of membership in a terrorist organization and succumbed to a 238-day hunger strike in prison while demanding a fair trial.

Turkish lawyers face ongoing prosecutions as state authorities continue to conduct mass dentations on suspected members of the Gulen movement. On Wednesday, more than 100 people were detained by counterterrorism police across 34 provinces.

Sinclair-Webb warned that if lawyers are subjected to investigations for representing suspects with alleged Gulen movement links, such operations could easily expand to lawyers representing defendants linked to other groups in the country.