As Turkey’s parliament debates a controversial proposal to weaken the influence of established bar associations, lawyers are protesting in the nation’s major cities. 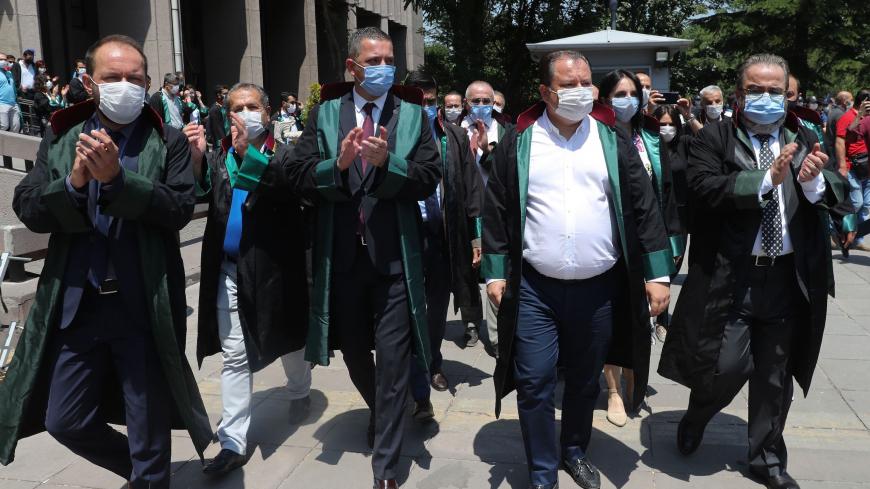 Lawyers, members of the Ankara Bar Association, clap as they protest a bill being examined by parliament upon the initiative of the ruling party that would change the system of bar associations and, opponents say, will dent lawyers' independence and influence on July 7, 2020. - ADEM ALTAN/AFP via Getty Images

Leading lawyers organized rallies in Ankara, Istanbul and Izmir to denounce measures they say would weaken the influence of Turkish bar associations, the majority of which have long criticized the government’s human rights record and failures to uphold the rule of law.

Introduced by the ruling Justice and Development Party (AKP) on June 30, the bill would amend a Turkish law regulating lawyers, allowing any group of at least 2,000 lawyers in provinces with more than 5,00 lawyers to establish a new bar association.

The parliament’s Justice Committee approved the proposal Monday and it is currently being debated in the General Assembly, which passed two of 28 articles since deliberations began Wednesday.

Expected to pass through a parliamentary majority held by the AKP and allied members of the Nationalist Movement Party (MHP), critics say the bill would further politicize a justice system deemed impartial by local and international human rights advocates.

“It is the rule of law that makes a country democratic or undemocratic,” Mehmet Gun, founder of the Turkish law firm Gun and Partners and chairman of the Better Justice Association, told Al-Monitor. “I believe this [bill] is going to weaken the rule of law in my country.”

He added, “In my view, all of this proposal is completely against the constitution.” If passed, Gun said, “it should be annulled by the Constitutional Court.”

Ankara, Istanbul and Izmir are currently represented by three bar associations, but if the bill passes Gun expects up to 30 different bars to be established, reducing the influence of individual associations while encouraging some to take stances that align with political parties to garner support.

“With the bill, the bars’ engagement in politics would be institutionalized and the defense would split based on political views, ethnicity and beliefs. The political views and the influence of a bar that a lawyer is a part of would affect the results of a case,” the CHP said in a statement.

Members of the AKP say the law will create a “more democratic and pluralistic” justice system by increasing the representation of lawyers from less populated districts. Yet according to an analysis of the bill by Human Rights Watch, this increase would bring with it a decrease in representation for bars in cities like Ankara, Istanbul and Izmir, which represent 55% of Turkish lawyers but would hold 7% of delegates in the Union of Turkish Bar Associations if the bill becomes law.

The redistribution of delegates would come ahead of the union’s December 2020 elections as well as bar elections in October, and would have significant impacts on the outcome of both votes, according Emma Sinclair-Webb, Turkey director for HRW.

“The main calculation to get the reform passed now is the October bar elections and December Union of Turkish Bar Associations election,” Sinclair-Webb told Al-Monitor. “We are likely to see rapid moves to set up rival associations in Istanbul and Ankara in time for the October elections.”

She added, “The reduced representation of the largest bars in the Union will help the government’s aim of controlling the result.”

“Human rights work will carry on among some bars like Diyarbakir and Urfa,” Sinclair-Webb told Al-Monitor. “In Istanbul and Ankara the authority of that work will be much easier to challenge if there are [AKP] or MHP-supporting bar associations to contradict the findings of the work of the current bar. Objective human rights or fair trial monitoring will be represented as purely partisan and political.”

The bill was introduced after a number of recent spats between leading bar associations and the Turkish government. In April, the Presidency of Religious Affairs filed a criminal complaint against the Ankara bar after lawyers criticized anti-LGBT comments made by Religious Affairs head Ali Erbas in a sermon.

In September 2019, more than 50 bar associations boycotted a ceremony marking the start of the judicial year because the event was held on the grounds of the presidential palace. The two events highlighted discord between leading lawyers and the Turkish government and the restructuring of bar associations will likely further politicize the justice system, Sinclair-Webb said.

“Of course, there are huge differences of political opinion among lawyers. That is normal,” Sinclair-Webb told Al-Monitor. “The problem is to pass a ‘divide and rule’ law that essentially politicizes the institutions that regulate the functioning of the profession, that have to ensure ethical standards and have to defend principles of fair trial and protect rights.”