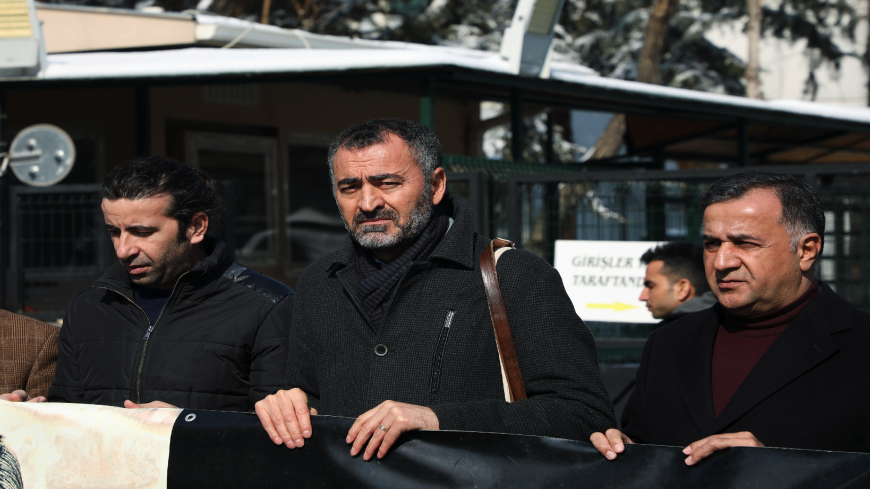 Cihan Aydin, a lawyer and the president of the Diyarbakir Bar Association, takes part in a protest in front of the Justice Palace in Diyarbakir, Turkey, Feb. 14, 2020. Picture taken Feb. 14, 2020. - REUTERS/Stringer

ISTANBUL — Diyarbakir Bar Association chair Cihan Aydin marched about 50 kilometers (31 miles) in three days before he was stopped Monday with several dozen bar association heads on the outskirts of Ankara.

Over the weekend, the group began a nationwide protest march against a proposed bill that would change election laws for bar associations. Protesters planned to end the march at Ankara’s Anitkabir, the mausoleum for Turkey’s first president, Mustafa Kemal Ataturk, but were blocked from entering the city by police. Following brief scuffles, the lawyers camped out in the streets surrounded by police barricades.

“Everything went smoothly until we reached Ankara,” Aydin told Al-Monitor. He added, “We were prevented from talking to press … visitors weren’t allowed in, and we weren’t allowed to have anything like seats, or chairs, or blankets or tents for the rain.”

The standoff continued for more than 24 hours, drawing press coverage and widespread condemnation from human rights advocates before the bar association chairs were permitted to reach their destination Tuesday afternoon. Reflecting on the events, Aydin said the police intervention helped propel the protest into the national discourse.

“Last night, I had chats with the police officers surrounding us, and I thanked them for preventing our march,” Aydin said, adding, “Thanks to them, we got our message out.”

Critics of the draft bill claim it would create new provincial bar associations, which in turn would alter district voting mechanisms to allow for the election of more government-friendly bar association chairs. Though the measure is opposed by the majority of current bar association heads, some expect lawmakers to introduce the bill by mid-July in parliament, where it will likely pass via majority vote under the ruling AKP-Nationalist Movement Party alliance.

The proposal comes ahead of key elections for Turkey’s legal groups, with about 70 bar associations preparing to elect new chairs in October. The Union of Turkish Bar Associations will also hold elections next year, in which current chair Metin Feyzioglu faces a challenge to his seven-year leadership after being criticized by some members for repeatedly backing government stances against the interests of Turkish lawyers.

“The reason for this amendment is to secure his place, because with the current election system there is no way that Metin Feyzioglu can be elected, and there is no way that a government-supported person can replace him,” Kerem Altiparmak, chair of the Ankara Bar Association’s Human Rights Center, told Al-Monitor.

As the protest march was underway, Feyzioglu criticized participants during an appearance on Turkish broadcaster CNN Turk Sunday. Feyzioglu then visited the site where police encircled protesters in Ankara Tuesday, but he received a cold reception as lawyers turned their backs to him and called for his resignation.

Feyzioglu responded to criticism Tuesday, saying, “This issue is not about me, and there is nothing that would necessitate my resignation.”

Other high-profile visitors to the protest encampment included Ankara Municipal Mayor Mansur Yavas and nationalist IYI party chair Meral Aksener, both of whom were received with more warmth. Still, most visitors were turned away.

Sevin Kaya, co-chair of the Ankara office for the Association of Lawyers for Freedom, said she tried to visit the protesters Monday evening but was blocked entry by police at the scene.

“They pushed us with their shields and I fell,” Kaya told Al-Monitor. She added, "Then my friends fell on me and they didn’t let us get up. They kicked us while we were on the ground. Once we were able to get back on our feet, we found ourselves outside of the protest site.”

A lawyer who passed the protest site and honked in support was also issued a fine of 132 Turkish liras (about $19).

Bar association chairs who spoke with Al-Monitor said they planned to continue similar protests until the draft bill is taken off the parliamentary agenda. Some are considering legal action against police forces for blocking the protest in Ankara.

An investigation was opened this past spring against the Ankara Bar Association for its criticism of an anti-LGBT sermon delivered by Turkey’s religious authority head Ali Erbas on April 24. Altiparmak said the government has since used the spat to push for election reforms on bar associations.

“The government had planned to bring this [proposal] to parliament; however, the COVID-19 pandemic prevented this,” Altiparmak said, adding, “So why are we debating this now? There are too many other problems to deal with.”

He added, “They are using the spat to change the election process without consulting legal professionals. … The reason is political rather than legal.”