Turkish press unions organized nationwide rallies Tuesday to protest the likely passage of a so-called disinformation bill. They worry that jail sentences of up to three years for spreading fake news could be applied to any news the government disapproves of. 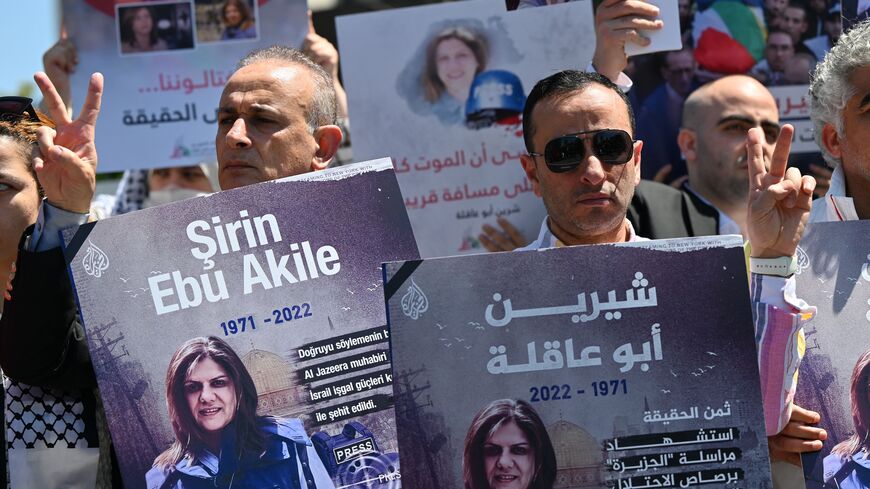 Journalists from different nationalities carry posters bearing the portrait of veteran Al-Jazeera Palestinian journalist Shireen Abu Akleh as they gather to condemn her death, in front of Israel consulate, in Istanbul on May 12, 2022. - OZAN KOSE/Afp/AFP via Getty Images

ISTANBUL – Claiming the Turkish government is creating another legal tool to punish opposition voices and critical media, press unions organized nationwide rallies in Turkey on Tuesday to protest a law they say will further limit free speech and the flow of information.

Along with other major cities, protests were held in Adana, Ankara, Izmir, Kocaeli and Istanbul, where Turkish media advocates spoke before a wall of journalists holding up printed paper signs, displaying statements like: “Today me, tomorrow you,” “Fake news according to who? According to what?,” “Ban the news, hide inflation” and “The free press will not be silenced.”

“We believe this law has been drafted to target [media outlets] that do not support the ruling party,” Ozge Yurttas, general secretary of the Turkish Press and Printing Workers' Union, said at the gathering in central Istanbul.

The parliament’s Justice Committee approved the draft bill last Wednesday (June 15), meaning its changes to Turkey’s Press Law now await a vote in parliament, which is expected to pass the bill through a simple majority vote held by members of Turkey’s ruling coalition between the Justice and Development Party (AKP) and far-right Nationalist Movement Party (MHP).

If passed, the bill would introduce prison sentences of up to three years for individuals found guilty of intentionally “spreading disinformation,” including online and on social media. The bill also allows jail terms to be increased by 50 percent for “disinformation” published under anonymous accounts.

Because of the bill’s broad definition of what constitutes disinformation and the intent to spread it, dozens of media rights organizations, both global and within Turkey, have called for the bill’s immediate withdrawal from deliberations.

Erol Onderoglu, the Turkey representative for Reporters Without Borders, said the draft bill will “no doubt pass in the parliament,” after which it will have “widescale negative impacts” on journalists, who will be further incentivized to self-censor.

The bill "will be weaponized, for sure, by a judiciary that is controlled by government actors and will result in the sanctioning of online media representatives and online journalists,” Onderoglu told Al-Monitor.

Speaking at Tuesday’s Istanbul rally, Gokhan Durmus, chair of the Turkish Journalists Association, highlighted provisions in the draft bill that would, for the first time, extend access to state press credential and public advertising funds to online journalists and digital publications, respectively.

Yet he noted such benefits would likely be “bestowed by bureaucrats” onto pre-approved, government-friendly media workers, while critical journalists would be continue to be denied state credentials and public ad revenue.

“Even before this draft bill becomes law, journalism is being prevented" in Turkey, Durmus said at the Istanbul rally Tuesday. “We believe this bill should be fully withdrawn and a much-needed law on press and disinformation should be prepared by media associations.”

The governing alliance claims the bill is necessary to stem online fake news, and that it adheres to the European Union’s Digital Services Act and General Data Protection Regulation. But in a joint letter, media rights groups stated neither law carries similar provisions.

Critics of the draft bill also claim it is designed to restrict free speech and the free flow of information ahead of elections expected by June 2023 in Turkey.

“The government will get their ultimate weapon before the general elections of 2023 with the aim of creating a climate of fear and silencing dissent through the social media platforms,” Yaman Akdeniz, a law professor at Istanbul Bilgi University and a founder of the Freedom of Expression Association (IFOD), told Al-Monitor.

Free speech advocates have made similar arguments regarding the arrest of 16 journalists last week in Diyarbakir on charges of belonging to a “terrorist organization.” The move brought the number of journalists behind bars to 67 in Turkey, according to P24, an independent media site.

The developments also come as a Turkish appeals court upheld a four-year prison sentence for a popular Turkish YouTuber called Porcay on charges of encouraging illegal drug use through a parody music video. Porcay claims he was criticizing excessive drug use.

Akdeniz said the draft bill will put pressure not only on journalists and digital content creators, but also on social media platforms, which he expects will see a rise in account information requests from the Turkish state.

If the bill passes, lawmakers with the main opposition Republican People’s Party (CHP) have said they would challenge its provisions in Turkey’s Constitutional Court. Yet Akdeniz argues the body is “extremely slow” in handling such applications, and has yet to rule on amendments made to the Internet Law in July 2020.