Is Turkey becoming a police state?

Critics say a proposed law will turn Turkey into a police state by providing security forces with extensive powers to suppress the government’s opponents. 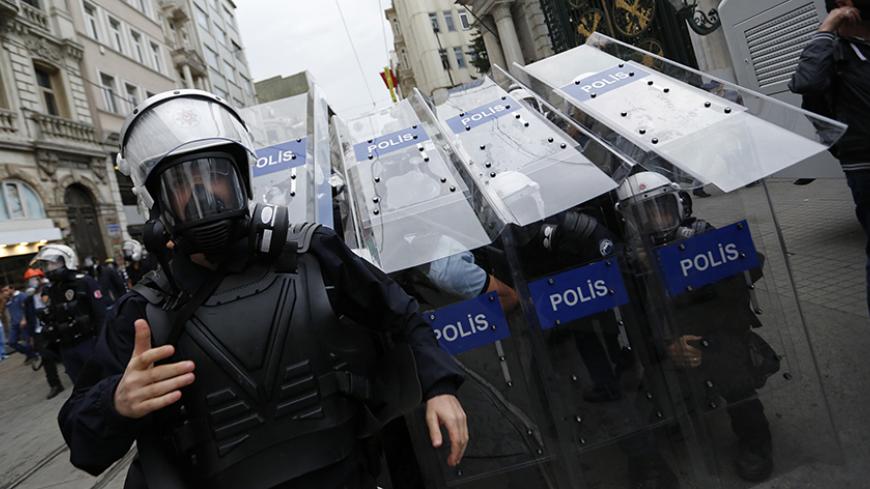 Turkish riot police use their shields as they clash with demonstrators during a protest in central Istanbul, May 31, 2014. - REUTERS/Murad Sezer

The Turkish parliament has started to debate a security law drafted by the government that includes measures critics say will turn Turkey into a police state. Prime Minister Ahmet Davutoglu, with strong support from President Recep Tayyip Erdogan, insists the proposed measures are in line with EU standards and are needed to protect freedoms.

The proposed law aims to prevent a repeat of the anti-government Gezi Park protests of summer 2013, and the demonstrations in October 2014 by Kurds protesting Ankara’s refusal to support the Kurds in the Syrian town of Kobani against the Islamic State.

The Gezi protests, which spread to other cities, left at least 11 dead across Turkey, and became the focus of international attention after the excessive use of police force. About 50 people were killed in Kobani riots that were also marked by excessive police force.

The opposition is united against the so-called Internal Security Law, which is being debated in parliament’s legal affairs commission. The draft law is expected to pass because of the ruling Justice and Development Party’s (AKP) majority.

Critics say the law will authorize the interior minister, and governors appointed by the government, to declare a state of emergency without officially calling it that. It will also increase the police's power, without providing appropriate safeguards, enabling them to detain people “incommunicado” up to 48 hours without legal approval, based merely on “reasonable doubt.”

Such detentions now require permission from a prosecutor or a judge, as well as concrete evidence to corroborate claims of “suspicion.” The most controversial article of the draft law permits police to use firearms against people using Molotov cocktails, or what are loosely defined as “similar weapons,” even when these are only thrown at public buildings.

Opposition deputies and human rights groups fear this will increase the use of deadly force by the security forces in Turkey, where the police is already criticized for acting with impunity and using excessive force despite legal restrictions. The draft law also foresees a prison sentence of five years for demonstrators wearing balaclavas or covering their faces in other ways.

Pointing to the oddity of the government’s claim that the draft law aims to protect life, as well as property, Riza Turmen, a deputy for the main opposition Republican People's Party (CHP), told Al-Monitor that the majority of the dead during the Gezi and Kobani demonstrators were killed by the police.

“What we need is a law that protects the public against the police,” said Turmen, a former judge with the European Court of Human Rights. “The aim of this draft law is to increase the powers of the police and use them against the government’s opponents,” he added.

The Nationalist Action Party (MHP) deputy Hasan Huseyin Turkoglu agrees with Turmen. Turkoglu told Al-Monitor that the government intended to usurp the role of prosecutors and judges, and underlined that this violated the constitution, and paved the way for a system that can only be termed a dictatorship.

Turkoglu also pointed to the arbitrary nature in which the proposed measures can be imposed. He said, for example, that the 48-hour detention period under the draft law can be extended to 96 hours when combined with anti-terrorism legislation, which foresees a doubling of the legal period of detention.

Umit Kocasakal, the Istanbul Bar Association president who is campaigning against the draft security law, says the government is trying to introduce “a standing martial-law regime.”

“We are faced with an unbelievable and blatantly anti-constitutional move that transfers the powers of the judiciary to the administration, which does away with the individual’s right to legal security, and which pits the police against citizens,” Kocasakal said in a statement.

Rozerin Seda Kip, a human rights lawyer and Istanbul Bar Association member, told Al-Monitor that there was also a mistaken perception that this draft law was primarily against the Kurds.

“When you read the preamble it refers to all recent demonstrations, not just the Kobani demonstrations. This covers everything, including recent protests by environmentalist groups or by villagers trying to protect their interests,” said Kip, a Kurd. She indicated that all of these demonstrations had been used in drafting this law.

Kip, who participated in an overnight vigil outside the Caglayan Law Court in Istanbul Feb. 10 as parliament was preparing to debate the draft law, said the draft was vague and gave extensive latitude to the police.

“Under this law the police can claim reasonable doubt and intervene against any two people standing together, or detain a person in winter with his or her face covered with a scarf as protection against the cold,” she said.

Erdogan rejects arguments against the proposed law and says its critics “only want the right to throw Molotov cocktails.” Talking to reporters on his plane Feb. 8 as he was flying to Latin America for a series of official visits, Erdogan also said, “If this law is not passed, the general elections in June will take place under the shadow of weapons.” He said “parliamentary democracy cannot be defended in this way.”

Davutoglu is also insisting that the new security law is needed to protect freedoms, arguing, “If there is no security, there is no freedom.” Talking to his parliamentary group Feb. 10, Davutoglu maintained that every article of the draft was in compliance with EU standards, and criticized CHP leader Kemal Kilicdaroglu for calling on the public to resist it.

“Having lost every election over the past 12 years, they see chaos and crisis as their only hope of coming to power,” Davutoglu said. “We will be heading for elections in [June]. If you are so sure of yourself, why don’t you call on the public to go to the ballot box instead of inciting them to resistance?”

Mustafa Elitas, the deputy head of the AKP’s parliamentary group, took the matter a step further and accused the critics of the proposed security measures of treason.

“Only those with bad intentions, who want turmoil in the country, who target human life, who are terrorists or traitors to the nation would oppose this law,” Elitas told reporters.

Attempts by Erdogan and Davutoglu, as well as members of the AKP, to put a positive spin on the draft security law have also failed to impress international human rights organizations and watchdog groups.

The Council of Europe’s Commissioner for Human Rights Nils Muiznieks said in a Feb. 6 statement that instead of addressing existing problems, the proposed draft law “seems to increase the powers of the police without reinforcing the necessary independent control over its actions.”

After details of the draft law became apparent in December, Emma Sinclair-Webb, Human Rights Watch's senior Turkey researcher, issued a statement in which she said “the government’s legitimate concern about violent protest should not be a blank check for police powers.”

“Parliament should amend the bill so that people are protected from arbitrary state action as well as public violence,” Sinclair-Webb said.

So far such calls have fallen on deaf ears as far as the government is concerned.

Kip hopes increased public awareness will force the government to review the draft and says this is what they are aiming to achieve. Turmen, on the other hand, is convinced the draft law, if passed, will be annulled by the Constitutional Court, and would, at any rate, be rejected by the European Court of Human Rights even if Davutoglu claims it is up to EU standards.