For some, the AKP-drafted internal security legislation is needed to preserve Turkey's public order; for others it is a chaos package that will allow arbitrary action by the state. 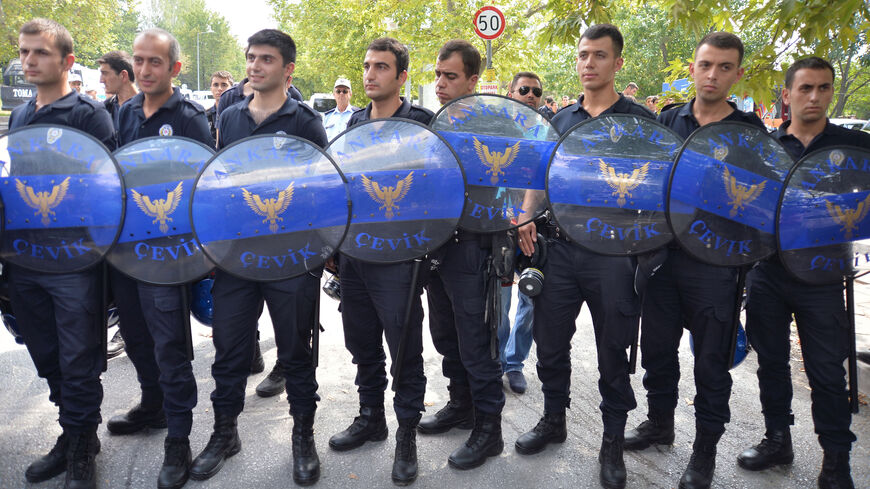 Riot police block a street leading to the Presidential Palace of Cankaya as members of the Turkish Youth Union (TGB) protest against President-elect Recep Tayyip Erdogan in Ankara, Aug. 11, 2014. - REUTERS

The Internal Security Package prepared by the Justice and Development Party (AKP) government and sent to parliament, where it is likely to be enacted by the end of the month, continues to be a hot topic of debate and street protests. The 43-article draft bill package seriously enhances the authority of the governors, subgovernors and police who are under government control. It introduces changes to the restructuring of gendarme units; training, promotions and assignment of police; restrictions against street demonstrations; sexual abuse and combating narcotics.

The first stern reaction to the package came from Selahattin Demirtas, the leader of the pro-Kurdish People's Democracy Party (HDP): "We will block the package in the streets," he said. "This is a package that has the potential to blow up the negotiation process. It is not a package only against Kurds." Demirtas thinks that contrary to popular belief, the government will become much tougher in the west of the country with the new package, hence the need "to oppose this security bill with a joint opposition stand."

The response to Demirtas from the government was not late in coming. Prime Minister Ahmet Davutoglu, who says that the package is intended to preserve public order, reacted strongly to Demirtas. Davutoglu said, "If they are saying that they will turn cities to rivers of blood, then Demirtas will be responsible for any blood that will flow."

Why is there so much reaction to the Internal Security Package?

Above all, the package equips the government that already controls the civil authority of governors and the police with substantial additional powers to intervene in popular demonstrations, to search people and their belongings, including cars, and detain people without a court decision. If the draft bill passes, a police officer orally ordered by a governor will be allowed to search a person, his car and belongings and then detain him for 48 hours if he is deemed suspicious.

Zafer Demiroz, president of the Bursa Bar Association, said, “In case any assembly or demonstration appears illegal, a police chief will be authorized to decide on 48-hour detention without a judicial ruling. As such, any popular demonstration that criticizes the government can be classified as illegal. This will allow widespread arbitrary detentions.”

Zafer Kazan, president of the Sakarya Bar Association, labeled this new package as a "chaos package." He said that if this draft becomes a law, a major path to illegality will be wide open.

Ersan Sen, a professor of law, said this new arrangement, which allows government-controlled civil authority and security forces to decide what is a crime instead of prosecutors and judges, will seriously cripple the principle of separation of powers. It will mean that the executive will be infringing upon the judiciary’s powers.

One of the most controversial articles of the package stipulates two- to four-year prison terms for those using Molotov cocktails in street demonstrations, those caught with knives and stones in their possession or those wearing uniform-like outfits and covering their faces. Kurdish politicians especially have been fervently against this article. According to HDP co-chair Meral Danis Bestas, this article classifies marbles, slingshots and stones as weapons and allows the police to apprehend and arbitrarily detain people possessing those items. Moreover, demonstrators who wear clothing of the same color and carry identical symbols can be detained for “wearing uniforms” and be sentenced to prison terms.

Another article that causes much debate will authorize the police and gendarmes to stop people they see as suspicious and search them, their belongings and vehicles without a judicial decision and, if deemed reasonable, detain them. This means police can stop anyone they suspect any time of the day and subject them to an exhaustive search. Security forces are allowed to open fire on people who don’t obey “halt” warnings. According to Bestas, this is actually licensing the police to kill. The package does not only include arrangements to preserve public order. Many interesting stipulations pertaining to the security sector are in the package. For instance:

Obviously, the package aims to overhaul Turkey’s security sector. But despite the importance of the issue, civil society is not thoroughly debating the new package.

A security expert who spoke to Al-Monitor but did not want to be identified criticized the manner in which the package was put together, more than its contents. This expert said that the AKP's classic method of putting many unrelated issues into one omnibus bill and passing it through the parliament should have been avoided in this case, as it confuses the public.

The reaction to the package was not only from inside Turkey. Human Rights Watch’s Turkey expert Emma Sinclair-Webb recalled that the government had already made new arrangements for police actions but now it was trying to augment its own powers. Sinclair-Webb, who called on the parliament to amend the draft, said that was the only way to protect the people from political violence and arbitrary state actions. Kati Piri, Turkey rapporteur of the European Parliament, said the police can use force only as a last resort and this should be set out as such in the package.

How does the government promote the package? According to Minister of Interior Efkan Ala, the security package not only ensures public order and protects people’s lives and assets but also introduces important improvements and democratization to the security sector. Ala said security is a public service that enables the people to exercise their basic rights and freedoms and other enhancement changes will follow. “We will introduce many reforms, all aiming at offering better quality public service to our people,” he said. Ala said the package covers specified crimes that could directly harm people. The state has no problem with any citizen on the streets. Searches and detentions will be authorized by senior security personnel and there will be a strict audit mechanism to ensure proper use of these powers in conformity with laws.

The argument on the concept of preserving public order and individuals’ freedom to express political views shows that the sensitive balance between security and freedom could be at risk. The question is whether the package, as is charged by those opposing the draft, will restrict people’s personal rights and freedoms, or will it be a guarantee of personal security and public order, as government officials claim?

Turkey has increasingly become a country where what is important is not what the law says, but how it is interpreted and applied in the streets. Therefore, the most accurate assessment and final verdict on the package will come only after seeing its effects in the streets.