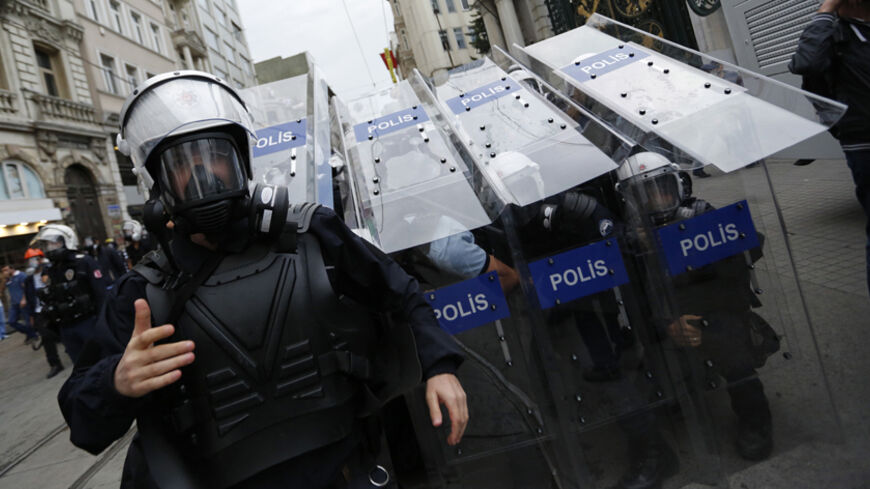 Turkish riot police use shields to protect themselves while they clash with demonstrators during a protest in central Istanbul, May 31, 2014. - REUTERS/Murad Sezer

On Oct. 14, right after the Kobani riots, Turkish Prime Minister Ahmet Davutoglu evaluated the events at a Justice and Development Party (AKP) gathering. Davutoglu gave a passionate speech, declaring, “For each TOMA [Turkish acronym for the armored riot police vehicle with water cannon] destroyed, the government will replace with five or 10 new TOMAs.”

He introduced the new security legislation, stating, “In this country, the AKP is the guarantor of democracy, public safety, personal freedoms and security.” Davutoglu said that to pre-empt potential domestic and foreign critics of the government from complaining about further authoritarianism and creation of a police state in Turkey, that they would take the European countries, particularly Germany’s laws, as a model for public order. Davutoglu said those who criticize Turkish police for brutality but view the same behavior as a norm in the West were “unacceptable.”

It did not help much to portray the proposal in a good light that Bulent Arinc, a spokesman for the AKP, said “Let’s look at the US. In the US, the police are everything. If the police[man] stops you in your car, he will tell you to keep your hands on the steering wheel. If you have to sneeze or reach for your pocket, he will shoot you in the head. The police have such a right in the US.” Arinc also cited the German model for the police, saying, “In Germany, the police have the right to arrest you, take you to a guarded place. If we are harmonizing our laws with the European Union, why not reform the law enforcement regulations as well?”

Davutoglu and Arinc’s words generated a public uproar about what expanded police rights could be. No one was quite clear what the German model of policing meant for Turkey, either. Several commentators on social media shared cartoons portraying Davutoglu as a Nazi introducing the 1930s German Model in Turkey.

Yet, behind the dark humor, there still lingers public confusion about what the 35 articles of the “judiciary reform” entail. Scholars asked how it was possible for Turkey to speak of a German model, given that Germany has a federal government and each state has different legislation for law enforcement.

The draft omnibus bill was submitted to the Turkish parliament Oct. 14 exclusively with the signatures of AKP parliamentarians. The bill is not yet enacted. However, given the AKP’s majority in the parliament and previous track record, it is a safe bet to assume it will be accepted with minor changes, if any. Once it becomes law, opposition parties may request judicial review by the Constitutional Court. A prominent lawyer, Vural Ergul, told Al-Monitor the judicial review might take up to eight months. “During that time the law stays in effect,” he said. Predicting the negative reception of the law by the opposition, Justice Minister Bekir Bozdag commented with sarcasm, “I am sure the Republican People’s Party [CHP, the main opposition party] will take this legislation — once it becomes law — to the Constitutional Court, because the CHP is in love with the court.”

However, it is not just the opposition that criticized the proposed legislation. Pro-AKP columnists, former AKP members and pro-AKP think-tank academics have all raised red flags and gently asked for sober reconsideration of certain articles of the bill.

So, what are some of the most contested articles of this judicial package?

The most debated item has been the proposed change in the language of the criminal code from “strong suspicion based on concrete evidence” to “reasonable doubt” as grounds to initiate a search of a suspect’s body, house or business. The first reasonable doubt case was reported — before the bill even became law — on Oct. 18, when a journalist critical of the AKP, Aytekin Gezici, was taken into custody and his house was searched. His lawyer explained it was due to his tweets. Although several pundits expressed somber concern, social media humor dominated, with political cartoons portraying ATMs as doubt machines, and police headquarters as doubt headquarters and generating new labels such as “halal [acceptable] doubt.” Pundits fear that even the possibility of such an amendment would take the country back to the 1980s and ’90s when arbitrary searches, seizures and arrests were customary.

The measure, if accepted, would extend the kind of crimes for which wiretapping could be authorized. Particularly open-ended terms, such as state security and constitutional order, were emphasized here.

The bill would also restrict an attorney’s right to access a client’s file during an investigation. The attorney would have no knowledge of the evidence until the charges were filed.

Another much-debated article of the bill is about Internet freedoms and a new criminal offense of making threats against public officials. This is another open-ended article that critics fear could easily be used to prosecute dissent. Turkish courts were already notorious for convicting dissidents on insult charges, and threats would provide another venue to silence opposition.

After analyzing the proposal, independent attorney Ergul, in sarcasm, told Al-Monitor, “If it is accepted, I foresee a strong wave of immigration from Turkey toward the West. Asylum applications to the EU will skyrocket.”

The AKP government claims this law is a reaction to the results of the Kobani riots. However, former prosecutors, judges and Ergul argue that the existing laws are sufficient to prosecute the perpetrators of those riots and seek financial payment for damages as well. As the Gezi protests have shown, several peaceful protesters were promptly taken into custody in June 2013 and police brutality has been even accepted by AKP elites. Ergul told Al-Monitor he concurs with other independent commentators that this is not a judiciary reform package, but one that aims to punish dissent, and particularly to seek revenge against Gulen movement members.

CHP legislator Bulent Kuscuoglu said, “There are no examples of this kind of legislation in the contemporary West. Only in Nazi Germany [did] the government hold the command and control of internal security forces in one hand.” Another outspoken CHP lawmaker, Umut Oran, told Al-Monitor he had already submitted an official parliamentary question to the AKP asking several difficult questions, such as, “When you say German model, do you mean the Nazi model? Is your goal to imprison all opposition members? Would not this bill provide reasonable doubt against all opposition members to be secretly wiretapped? Does the reasonable doubt clause also foresee Schutzhaft of Gestapo [protective custody, a euphemism for the power to hold people without judicial proceedings]? Why did you not propose this as an exclusive judicial reform law to be brought to the parliament floor but as an omnibus law to include other items, such as raising salaries of judges and prosecutors?” These are difficult questions from the opposition indicating their deep concerns against the fast-eroding rule of law in Turkey.

Sadly, this suspicion is well warranted. This is the sixth omnibus law introduced on the judiciary since 2011. The last one was accepted on March 6. Indeed, this proposal pretty much reverses all the positive steps taken to protect suspects. Now that the corruption probe cases against AKP elites have been dismissed, it might be just the right time to change the laws for the AKP. After all, it was the current Interior Minister Efkan Ala who had made it clear to a high-level bureaucrat in a leaked conversation: “We can even pass new legislation to make it legal.” It seems Ala is a man of his word.