New Internet legislation may yet backfire on Turkish Prime Minister Recep Tayyip Erdogan and his party. 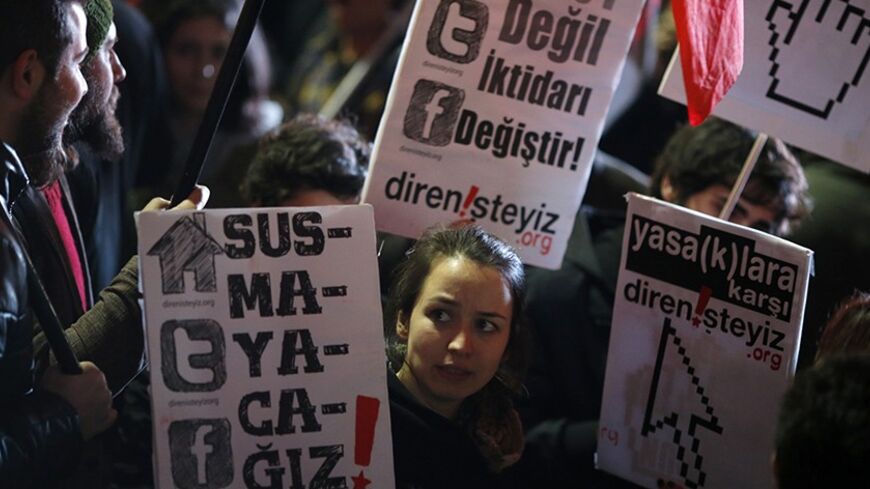 Protesters shout slogans, hold banners and wave flags as they demonstrate against new controls on the Internet approved by Turkey's parliament in Ankara, Feb. 8, 2014. - REUTERS/Umit Bektas

"This could be the last banner you click on," read main opposition party Republican People’s Party (CHP) ad on several news Web pages. After days of real and virtual protests, the "Do not touch my Internet" campaign will have utterly failed in Turkey when a new law goes into effect, known widely as "the Internet law." The bill has been approved in parliament and went to the president for his signature. He could veto it, but judging from his record of using veto powers, that is not a realistic expectation. There is some probability that after the opposition complains, the Constitutional Court may revoke the bill. Yet, the probability is rather low. Based on the Justice and Department Party (AKP)’s shrewd tradition of passing "high moral laws: morals to protect the youth," many in Turkey are considering this a done deal.

What is not yet known is how this law will affect those inside Turkey, including the AKP itself. Unlike the other restrictive rules and regulations (alcohol and coed dorms come to mind), this one applies to a significantly large audience — almost all of the country. It will also affect AKP voters.

This last restriction might blow back on the AKP. It is estimated that 50% of Turks have Internet connections in their homes; many illegally share with neighbors and the numbers are rising. On Feb. 8 — even though mainstream media did not have the courage to cover it — there were again protests against the "Internet law" in Istanbul and Ankara. Twitter was abuzz with photos and resistance statements. "Tayyip [Prime Minister Recep Tayyip Erdogan] has unfollowed us on Facebook," "Tayyip your quota is full," "The Internet is not working, come out to the streets," "Tayyip cannot shake off the Gezi syndrome" were some of the most visible slogans of the day.

That said, the Internet law goes beyond child pornogaphy and protection of minors. That is why when AKP deputy Necdet Unuvar tweeted, "Today is safer Internet day, they used to call this a censure but they do not anymore," while another deputy, Cevdet Erdol, tweeted,  "All forms of addiction: tobacco, drugs, alcohol, weed, Internet whatever they might be, we continue our struggle against them." He added "for our kids."

Reading all these, you might get the impression that there are no regulations or controls on the Internet in Turkey. You would be wrong. Indeed, already 40,000 websites are inaccessible in Turkey right now. Official statistics are not provided by TIB (well-known to all Turks, the acronym stands for Department of Telecommunications and Communications). YouTube has been blocked for months at a time, and Vimeo, Daily Motion and World Press have been temporary blocked as well in the last couple of months. If you talk to Kurdish activists they will tell you several Web pages on Kurdish issues have been indefinitely blocked. Many times Firat News agency could not be reached [online] in Turkey. There are ways around these regulations but they cost time and effort. It has also been getting more difficult. For example, ktunnel.com, a proxy channel, was blocked by the government in November 2013. And there have been multiple legal cases as well, pianist Fazil Say being the most well-known to receive a suspended prison term for his tweet, or more recently a foreign journalist’s deportation.

So what is new with this regulation? Dogan Akin, a seasoned journalist and founder of T24 news portal, which provides a venue for "axed" media personnel, told Al-Monitor, "We should highlight some of the ambiguities of the law: First, it praises the value and secrecy of private life and aims to protect it; then it allows all of our online traffic maps (Web pages, email, chat rooms, shopping habits) to be filed for two years." This also means the government will have access to all financial transactions. This is a blanket law covering everything with no judicial review.

The new law abolishes any prison terms, but instead imposes hefty fines. In addition, facing serious challenges from world public opinion, the Turkish government promises not to block access to a whole Web page as long as they can prevent access to harmful publications. To give an example, if you are in Istanbul and you click on www.al-monitor.com, you may be able to view all opinion pieces, except for the ones TIB has found in violation of its rules. It is a "smoother" way to operate — as one pro-AKP friend stated, "Nicer than blacking out the whole site."

This would apply to any Web page, and even the administrator of the Web page might not recognize the effect for awhile, because the law gives serious power to TIB. No court decision would be necessary to block access to a particular video, recording or news, but a court decision would be necessary to regain access. The same rules will apply to social media posts, Twitter and Facebook as well. So, if your posts violate the new rules, they will be blocked and a legal process will be initiated against the user. Akin and many other pundits agree that the European Court of Human Rights will be busy with several cases involving this new legislation.

There are serious caveats here: First and foremost, how many court cases can the system handle? Whose names will make the headlines because they have clicked on a tweet with a pornographic image? Despite all arguments from pro-AKP pundits that "the ordinary people of Turkey do not care about the lies from marginal media; these will not affect [Prime Minister Recep Tayyip] Erdogan’s popularity," this haphazard legislation indicates indeed that the AKP cares deeply about "marginal" people.

The new law wrapped up with a package of high morals does not exclusively aim to control the Internet, but the people in Turkey, both their freedom of expression and right to access information. It will make it rather difficult for Turks to "surf the Internet," which might indeed produce unintended consequences detrimental to its own designers. If these restrictions were endorsed when Internet access was a luxury, it might have worked. But now it is too late. The close surveillance of the people may after all generate a Frankenstein by the AKP against Erdogan. It will probably go down in history as the worst self-destructive legislation for the AKP. So can the porn lobby accomplish what all others have failed to do?