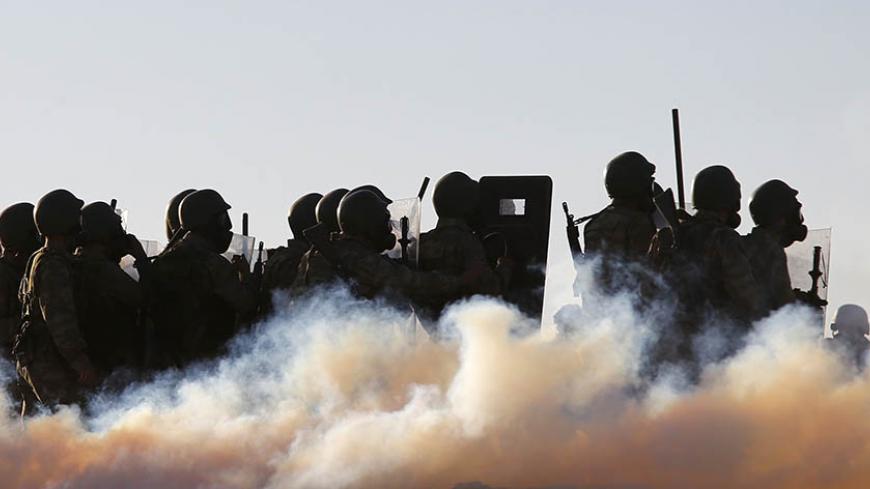 Turkish soldiers use tear gas to disperse Turkish Kurdish protesters near the Mursitpinar border crossing on the Turkish-Syrian border, in the Turkish town of Suruc in southeastern Sanliurfa province, Oct. 4, 2014. - REUTERS/Murad Sezer

Foul-mouthed quarrels and hassles between government and opposition members of parliament are frequent in Turkey’s parliament, even commonplace. In recent days, however, things have reached an alarming point, with an unprecedented climate of violence descending on parliament.

The Feb. 17 session left four opposition deputies injured — one from the People's Democracy Party (HDP), which represents the Kurdish movement, and the others from the main opposition Republican People’s Party (CHP). Some ended up with bleeding heads, others with cracked ribs. The violence continued when the assembly reconvened on Feb. 19. A CHP deputy rolled down a staircase as deputies exchanged blows and kicks.

Opposition lawmakers said they had come under a collective attack by members of the ruling Justice and Development Party (AKP), while the AKP claimed the opposition parliament members had battered one another.

The confrontation that sparked the violent melees stems from a bill the AKP is trying to pass through parliament in a bid to equip police and public administrators with extraordinary powers.

Ironically, the 132-article bill — known as the internal security package — had a damaging impact on parliament’s own security as soon as the debate started.

The opposition, mainly the HDP and the CHP, argue that the bill, if approved, would put the final nail in the coffin of the rule of law in Turkey, transform it into a police state and undermine social peace. The objections pertain to provisions designed to bypass the judiciary in a series of situations that require judicial decisions and empower police and public administrators as the sole decision-makers. Hence, in a bid to delay the bill as much as possible, the opposition is trying to make use of all means they have at their disposal under parliamentary rules.

Here is an overview of the most contentious points in the internal security package:

Police will be authorized to monitor telephone and other communications for 48 hours without a judicial permission or ruling. Currently, this is limited to 24 hours.

Similarly, police will need no judicial order to search suspects by having them undressed as well as to search nonvisible compartments in vehicles such as trunks and glove compartments. Police will have to submit such measures to judicial approval within 24 hours after employing them. Since 2007, Turkish police have been barred from employing such measures without a judicial order.

Police will also be authorized to make detentions independently from the judiciary in cases where suspects are considered to be caught in the act. In cases of collective crimes, the detention period will extend to up to 48 hours.

Police will be allowed to use firearms against people throwing Molotov cocktails as a means to neutralize them. Slingshots and slingshot balls will be classified as weapons, and the possession of these objects during demonstrations will be punishable with jail terms of 30 months to four years. The same sentences will be applicable to demonstrators who conceal their faces with scarves or gas masks.

In a newspaper ad Feb. 10, the Turkish Bar Association warned that the bill would have “grave implications restricting human rights and freedoms in contravention to the constitution and the European Convention of Human Rights.”

The Istanbul Bar Association, to which 31,000 of Turkey’s 81,000 attorneys belong, ran its own newspaper ad the same day, which said, “With this package, individuals will be left without any protection, stripped completely of any judicial guarantees, and rights and freedoms will be left to the mercy of the government, the administration and the police.

“With unlawful and extraordinary powers granted to administrative chiefs and the police, the right to life, personal safety and the freedoms of expression, gathering and demonstration will cease to exist.

“This is not a legal amendment but the introduction of a new regime. And that regime will be one of reigning fear, hard-core fascism and dictatorship, where no one will be able to breathe. [But Turkey’s] social fabric will reject this bill that flouts the structures of the democratic regime.”

The Istanbul Bar Association’s use of stern and dramatic expressions such as fascism and dictatorship are worth noting as they reflect the sharp polarization over the bill.

The concerns and mistrust are not groundless. The Turkish police’s notorious abuses of power are wide-ranging — from unauthorized wiretappings to the use of excessive force against protesters. The plan to further expand their authority to use firearms is fueling concerns of new victims in the already bulky records of police violence.

On Feb. 18, the Cumhuriyet daily dedicated its centerfold to the pictures of 183 people who have died as a result of police violence in the past eight years, including shootings, tear gas shells, beatings and maltreatment in custody. They included 12 people killed during the 2013 Gezi Park resistance, hit with bullets or gas capsules, or as a result of police beatings.

It is important to note that the government justifies the internal security package with the deadly riots that erupted in 35 provinces across Turkey on Oct. 6-8 during Kurdish protests over the Islamic State’s (IS) rush into Kobani. The Kurdish movement had called the demonstrations to denounce Ankara’s Syria policies, which it blamed for empowering IS and its seizure of Kobani. The Kurdish anger boiled over into violence that claimed at least 50 lives and left thousands of homes, shops, vehicles and public buildings torched or damaged.

The internal security package is now also threatening the peace and settlement process that has been under way for more than two years between Ankara and the Kurdish movement. In a Feb. 17 statement, the co-chairs of the Kurdistan Communities Union, the top body of the Kurdish political movement, said, “The AKP may keep bragging about ‘democratization, the process and negotiations,’ but, as the internal security package clearly shows, this is all demagogy. It has become obvious that this mindset — closed to democracy, settlement and negotiation — will take no steps for Turkey’s democratization and the resolution of the Kurdish problem.”

In remarks made the same day, HDP co-chair Selahattin Demirtas said, “The package is destroying not only the settlement process but all dynamics of social peace. It is damaging the peace process and undermining all efforts at peace in society. One cannot speak of peace in a place where the opposition is being crushed.”

Since the summer of 2012, the AKP government has pursued a policy of isolation and a proxy war of changing intensity against the Kurdish cantons in Syria. That this policy would be unsustainable was obvious from the very beginning for the following reason: Ankara could have never maintained a peace process with its own Kurds while pursuing an enmity process against the Democratic Union Party of the Syrian Kurds, who have not only kinship bonds with the Turkish Kurds but also close ideological and political bonds with Turkey’s Kurdistan Workers Party. The riots over Kobani effectively shattered this unsustainable policy.