The Turkish government is accused of abusing pandemic restrictions to suppress the opposition and advance its own political agenda. 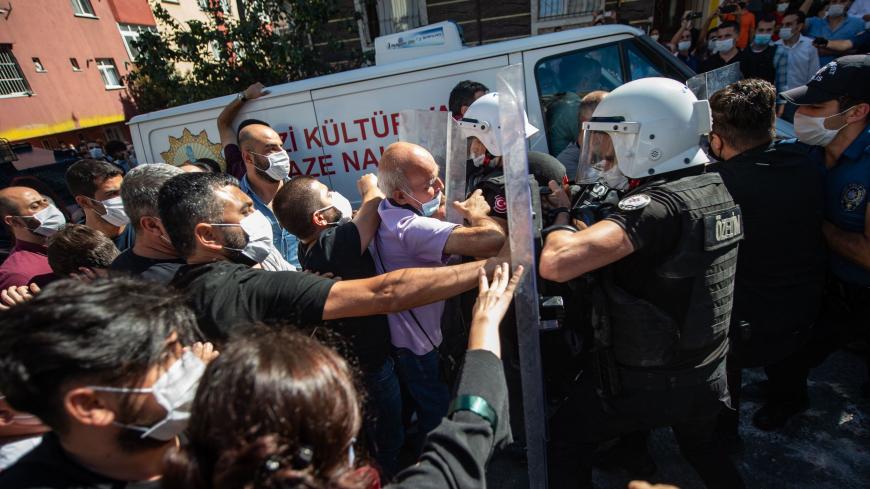 People clash with Turkish police ahead of the funeral of Turkish lawyer Ebru Timtik in the Gazi District of Istanbul on Aug. 28, 2020. - YASIN AKGUL/AFP via Getty Images

The efficiency of Turkey’s measures against the coronavirus remains questionable, but they have clearly become a new government tool to fuel political tensions and polarization. Ankara has banned opposition protests and other politically inconvenient events while the ruling party has no trouble mustering crowds to promote its own agenda.

On Aug. 30, the government banned celebrations of Victory Day, marking Mustafa Kemal Ataturk’s decisive defeat of invading Greek forces in 1922 before his proclamation of the secular Turkish republic the following year. Heavy-handed police greeted those who took to streets in defiance of the ban. A parliament member from the main opposition Republican People’s Party (CHP) said he was kicked by the security forces. Police sealed off streets leading to Ataturk’s mausoleum in Ankara. The only group allowed to the mausoleum were supporters of President Recep Tayyip Erdogan who, flouting the solemn atmosphere of the edifice, chanted slogans in support of the president as he laid a wreath at Ataturk’s tomb.

In sharp contrast, Erdogan led a crowded and high-profile ceremony in eastern Turkey only a few days earlier to mark the anniversary of a 11th century battle that paved the way for Turkish settlement in Anatolia and the subsequent rise of the Ottoman Empire. Similarly, the pandemic did not stop nationwide events July 15 to mark Ankara’s suppression of the 2016 coup attempt.

Perhaps the most striking gathering was the first Friday prayer that Erdogan led at the Hagia Sophia in Istanbul July 24 after reconverting the Byzantine edifice from museum to mosque. Hundreds of people flocked to the square outside, many of them mobilized by the ruling Justice and Development Party (AKP). Though ecstatic men scrambling to reach the square overpowered the police barrier, there were no truncheons or kicks.

Clearly, the enforcement of pandemic measures has become a means of political discrimination, but worse, many in Turkey are convinced that the AKP is using the restrictions to advance an ideological war in line with its Islamist-rooted vision for the country.

“The government has shown its true colors,” CHP head Selin Sayek Boke told Al-Monitor. According to Boke, the AKP “has defined like-minded people as ‘us’ and everyone else as an enemy” as part of a quest to build “a new regime against the core tenets of the Republic,” demonstrating that “it will not hesitate to use any means to that end, including violence.”

Boke took up Erdogan’s Aug. 31 visit to Giresun, a Black Sea city hit by deadly floods, where he addressed hundreds of supporters in what amounted to a political rally. “This speaks volumes about the regime,” she said. “The government is prepared to do anything [to cling to power]. … It is prepared to instrumentalize even the coronavirus pandemic.”

Since lockdowns were lifted June 1, the government has banned all opposition demonstrations on the grounds of curbing the contagion and responded harshly to any defiance.

On July 21, for instance, police in the western city of Izmir violently dispersed women demonstrating against a wave of femicides following the gruesome murder of a university student. Protesters were truncheoned, punched and kicked.

The pro-Kurdish People’s Democracy Party (HDP) faced similar treatment during attempted marches in June to protest the government’s seizure of HDP-run local administrations. Participants were also fined for disobeying pandemic rules. Mehmet Akat, co-chair of the HDP branch in the western town of Saruhanli, was one of them. “We were respecting physical distancing rules and wearing face masks,” he told Al-Monitor. “The police intervened on the grounds of the pandemic and detained 10 of us, locking us in a small vehicle. It was in that vehicle that I faced the coronavirus threat, not during the march,” he said, adding that he was fined 1,000 Turkish liras ($136).

Journalists have faced fines as well. Turgut Dedeoglu, a cameraman for Arti TV, was fined in July while filming a protest by lawyers against amendments to the bar association law. “To shoot the police intervention, I had to approach the crowd, just as the police themselves did,” Dedeoglu told Al-Monitor as he recounted how he ended up with a fine of 390 liras ($53).

Some 261,000 people have been fined for disobeying physical distancing guidelines, according to the Human Rights Association, which said the fines lack legal grounds and should be rescinded.

The association's head, Ozturk Turkdogan, argued the government has also taken advantage of the pandemic to rush bills through parliament, including the amendment on bar associations, economic measures affecting millions of workers and a de facto amnesty to reduce the prison population. “Wide public debates were required on all those bills, but they were passed as faits accomplis on the pretext of the coronavirus. Stakeholders were allowed [to express themselves] neither in parliament nor in the streets,” he said.

The AKP’s conservatism appears to have shaped the reopening of social life as well. While shopping malls and coffeehouses have reopened, theaters and musical venues remain closed. Establishments that serve alcohol have become targets of strict police scrutiny, ostensibly to control their adherence to pandemic measures.

And how effective have these measures to protect public health been? The contagion has only flared up, with the official daily tally standing at 44 dead Aug. 31, the highest since the reopening began in June.