A peaceful celebration in Turkey was marred by barricades and tear gas, reports Tulin Davoglu. While the many non-governmental organizations that applied to gather before parliament were denied permits, the event in no way provoked security forces to violence, she writes. 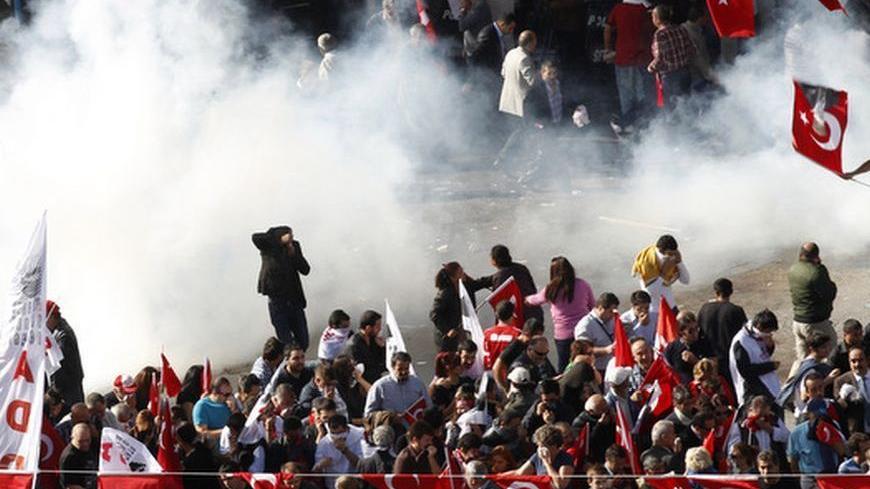 Demonstrators run as police use tear gas to disperse them in central Ankara October 29, 2012. - REUTERS/Umit Bektas

The first “spring” in a majority-Muslim population came 89 years ago in Turkey. As the successor to the Ottomans, the young Turkish republic rose from the heartland of the Empire with an exceptional geography, positioned strategically among Europe, the Caucasus and the Middle East.

Now, 89 years later, despite a vibrant economy and regional clout, Turkey is being threatened by chaos in its neighborhood. But what’s even more critical is the polarization inside the country.

Turks marked the birthday of their nation yesterday, Oct. 29, and they are divided over the direction of their country. More than 40 non-governmental organizations wanted to gather before the first parliament, where Mustafa Kemal Ataturk, the founding father, declared the establishment of this new state. Among them were associations linked to Kemalist ideology and Alevi groups.

The Ankara governorate turned down permission requests, claiming that they had reliable intelligence that “radical groups” would provoke the crowd to create scenes similar to those in Tahrir Square. Nonetheless, tens of thousands of pro-secular protesters showed civil disobedience to the government’s ban and poured onto the streets to make a point: the 1923 revolution is not dying away.

I joined the crowd yesterday at Ulus, a district in Ankara, as a journalist and a citizen. Frankly, after living in Washington, DC for 12 years and being accustomed to attending the receptions at the Turkish Embassy for Republic Day, I thought I should experience my first Oct. 29 celebration to better understand the sensitivities of the people toward the unity of the nation.

First, the police made it difficult to get to the area — the roads were blocked. I noticed people were joyful, easy going, waving their flags. I approached the crowds to see what was happening on the front lines between the people and the police, and also to better see who exactly was in the crowd.

As I got close to the barricades amidst the friendly crowd and talked to many of them, I heard many worries about the future. I did not witness anyone doing anything wrong to the security forces — except that they booed and called Governor Alaaddin Yuksel to resign for putting barricades before them on a day like this.

And then suddenly and for no reason at all — totally out of the blue — police started to fire tear gas at us. Like many others, I was caught unprepared, and my asthma started to kick in badly. I was able to rush out of the area with the help of the people around me, who were simply kind and caring. Many actually helped each other, shared their water and lemons to clear their lungs and eyes from the tear gas.

Still, I am thinking — with no answer so far — as to why the police used that tear gas on us. But one thing is clear: There were no members of any radical group in that crowd. The police provoked the people, not the reverse.

The ruling party, the Justice and Development Party (AKP), knew that President Abdullah Gul would host a reception at the presidential palace, Cankaya Kosku, later in the evening, which the higher ranks of the military would attend with their wives for the first time since Gul took office in 2007.

Last night’s reception marked yet another crucial turning point in the normalization of relations between the military and the Islamist-based government. Recep Tayyip Erdogan, the prime minister, also attended this reception at the presidential palace with his wife for the first time.

Only five years ago, though, Turkey came to the brink of yet another military coup over the headscarf issue. Considering themselves the saviors of the Turkish Republic, the military believes that some head covers are political symbols rebuking the founding principles of this nation. Since those days, more than 250 military personnel — both active and retired — found themselves behind bars as accused “terrorists” under a very long and conflicted case named Ergenekon.

The pro-secular population today considers the current military leadership to be conforming to the government’s ideology, to say the least. Whatever the truth, many of the secular activists and common citizens on the street yesterday told me the government now considers them “radicals” just as the judiciary calls a former chief of staff a “terrorist.”

In that context, the AKP was awaiting the day when the prime minister’s wife, Emine Erdogan, along with Hayrunnisa Gul, the president’s wife, hosted the reception at the Cankaya palace in their headscarves. Yet Erdogan continued to chastise the old guard even on the day when a historic new beginning was taking place. Moreover, he blamed opposition Republican People’s Party (CHP) leader Kemal Kilicdaroglu for everything that went wrong on the streets of Ankara yesterday. Specifically, he accused him of “following illegal organizations.” Indeed, Kilicdaroglu and a group of his party members had attended the celebration at Ulus yesterday, and unfortunately got impacted by the tear gas.

“People were only holding their flags and waving them,” said Kilicdaroglu. “The police kicked people holding flags. It’s a sad, disappointing day.” Speaking at his party’s meeting at parliament today, Kilicdaroglu said it’s time to give the prime minister a new name: “Tayyip Assad Erdogan,” in response to the prime minister’s criticism of the security forces.

“I did not give the order to police to bring down those barricades. They showed weakness,” said Erdogan today. Kilicdaroglu argued that the prime minister’s mentality was likely to see people get killed and wounded on the Ankara streets.

Yesterday’s unfortunate events at Turkey’s capital also revealed a surprise split between President Gul and Prime Minister Erdogan. At last night’s reception, it was discovered that Gul had called the Ankara governor on Saturday and ordered him to bring down the barricades in case tensions rose. The prime minister rebuked such news stories and said that the president does not have the authority to give orders to the governor or the security forces. “There has never been a double-headed administration in this country,” Erdogan said. “Everyone knows his job as prime minister and president.”

It becomes clear now that the Erdogan government really attempted to take tough measures against the pro-secular protestors, but it was the security forces’ consciences — or common sense — that prevented a bigger tragedy.

Despite all this, thousands visited Anitkabir, Ataturk’s mausoleum, yesterday. One woman told me they were scared to go to Ulus, because they worried that the police would take their names, and that they may pay the price for it later by losing their business.

“This government is too strong. They are listening to all our telephone conversations,” she told Al-Monitor. “There is no media left in the country. No one reports the truth any longer, or seriously talks about the corruption taking place before our eyes. Everyone is scared.”

Turks are truly divided, and growingly distrustful of each other’s intentions for the country’s future. The AKP considers people paranoid who doubt the party’s loyalty to the country’s founding principles of a secular, social and democratic state. But professor Abdulkadir Cevik, head of psychiatry at the Ankara University Medical Department, argues that people who oppose AKP policies don’t qualify as psychologically troubled.

“Turkey is born by the demise of an empire. We formed a new identity. But there are also those who could not break away from the old identity, or mourn enough for the loss of the empire,” he said. “To call such worries paranoia, such memories should not have existed in our national conscious. Our history, however, is full of trauma. That’s why we need to be more careful.”

The pro-secular protestors want to see the AKP out of office. They believe Erdogan hopes for a counterrevolution to 1923. And for them, that is a red line that no one should attempt to cross. Each time Erdogan got elected, he gave a “balcony speech” in which he promised to represent all the citizens of the country, but people told Al-Monitor that Erdogan’s words does not match his deeds.

“When the AKP government first came into office, their slogan was to end all restrictions, all bans and give people true freedom and democracy,” said Cevik. “The same government today bans people from putting flowers on Ataturk’s busts or statues on special days like this. Our people have such traditions, and they take issue with that.”

Semiha Kutoglu, a pharmacist, told me she is tired of the prime minister constantly speaking negatively about the country’s past and its founding years, and of the AKP for portraying themselves as victims all the time.

“They have a problem with the Republic, and I am here to show my love to our founding father. [Erdogan] should know that he owes his prime ministry to the man he criticizes every day,” she said. Many in the crowd expressed similar views. People sounded tired of the AKP machine’s never-ending praise of itself since it came to power in 2002 — as if nothing positive had occurred in the country prior to its rule.

Yet every country has made mistakes in the past. No country is perfect. As the nation’s democratic system evolves, so does its judiciary. In retrospect, the principles that the country stands on become stronger and clearer. It’s hard to build a country and have it all — to be strong and sensical and consistent. The problem is that the AKP is using that youth and fluidity to fundamentally change the character of what the country is supposed to be. The people are simply crying out that this is the wrong way to go. That in order for a democracy to develop and grow, the fundamental principles — neutrality and justice — must always be preserved. Otherwise there is nothing to base anything on.

In this polarized environment, there were still others who were simply angry at both sides. A man who asked that his name not be used told me, “While the AKP doubts the Muslim-ness of a part of Turkish society, the ones on the streets today had doubts about the loyalty of a different segment of Turkish society. Such thinking is beyond bizarre.”

Indeed, Cevik says that ordinary people on both sides — both the supporters and the opposers of the AKP — are worried about this climate of seeing the “other” as the “enemy.”

“The country seems to be heading to a direction that is unknown,” he explains.