The anniversary of the opening of the Turkish parliament coincided with the centennial of an Ottoman military victory in Iraq during World War I, creating a new fault line in Turkey. 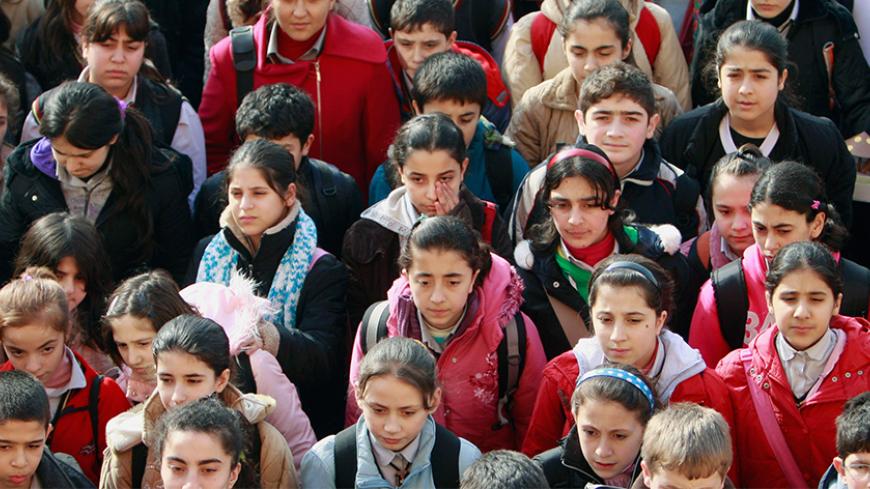 Turkish primary school students stand in the garden of their school in Istanbul, Jan. 13, 2009. - REUTERS/Osman Orsal

Turks recently celebrated the anniversary of the opening of the Grand National Assembly of Turkey (TBMM) by Mustafa Kemal Ataturk on April 23, 1920.

Every April 23, officially known as “National Sovereignty and Children’s Day,” schoolchildren throughout Turkey enjoy a mix of politics and festivities as they sing songs, sit at the desks of high-ranking government officials — president, prime minister, Cabinet ministers, speaker of parliament, provincial governors — and issue remarks on the importance of freedom, the rule of law, national independence and representative democracy. The heartwarming spectacle nurtures hope that younglings with a tenuous understanding of lofty ideals will someday become informed citizens and dedicated public servants.

Although Turkish children were still able to enjoy April 23 this year, new and futile disputes in the political realm marred the national tradition. Ten days before the anniversary, the office of Speaker Ismail Kahraman, who is a member of the ruling Justice and Development Party (AKP), announced that the TBMM will not hold its traditional reception out of respect for those killed in the ongoing fighting in southeast Turkey.

But then news emerged that the AKP government planned to commemorate on April 29 the centennial anniversary of the Ottoman victory at Kut al-Amara in Iraq against the British during World War I. Whereas the cancellation of the TBMM reception had received scant attention, the Kut issue started a storm.

Yavuz Alogan, a columnist at Aydinlik newspaper, which is allied with the ultra-leftist and ultranationalist Homeland Party of Dogu Perincek, claimed the decision to commemorate Kut “reflected [the AKP’s] reluctance to celebrate national sovereignty.” He added, “We should be ashamed of ourselves.”

In a less hostile tone, pro-secular Sozcu and Cumhuriyet interpreted the AKP’s move as an attempt to suppress the memory of one of Ataturk’s greatest accomplishments, the founding of the TBMM, and cherish an Ottoman victory that hardly anyone remembers.

Pro-AKP media outlets responded to secular critics in kind. One website argued that those who are bothered by the remembrance for Kut are “the English among us,” contending that after joining NATO in 1952, Turkey stopped celebrating the military victory under pressure from its new-found British ally.

It is more likely that Ankara did not want to offend London because Turkey needed British support in its dispute with Greece over Cyprus in the 1950s. A similar theory posits that Turkey stopped celebrating Kut because it allied with Iraq for a brief moment in the early Cold War years.

So why are commemorations that should unite Turks of all stripes dividing them instead? After all, the Kut al-Amara campaign — where the Ottoman army drove back, laid siege and took prisoner a British task force of 13,000 troops — hardly diminishes Ataturk’s stature. The founder of modern Turkey accomplished a great deal in the Canakkale (Dardanelles) campaign during World War I and with his military victories against foreign occupiers after the Great War, the proclamation of the republic in 1923 and with the country’s subsequent modernization.

According to Edward Erickson, author of the book “Ordered to Die: A History of the Ottoman Army in the First World War” and professor of military history at the US Marine Corps Command and Staff College, “The [Kut campaign] was a brilliant display of effective combat leadership.” Erickson told Al-Monitor in an email, “[Commander of the Ottoman army in Iraq] Nurettin Pasa’s plan resulted in the capture of an enemy army — it was, and is, a very, very big deal. The twin victories of Canakkale (defensive) and Kut (offensive) bought time for the Ottoman Empire and likely extended the war in the Middle East by one to two years.”

In other words, just like Canakkale, Kut helped to weaken Turkey’s opponents — especially Britain — which contributed to the Turks winning back their country under Ataturk’s leadership in 1919-1922.

To be sure, the decision to dust off the memory of Kut and reintroduce it to the public has a political dimension. Veysel Simsek, a historian of the Ottoman Empire and postdoctoral fellow at McGill University’s Indian Ocean World Center, told Al-Monitor, “Past events are remembered (or forgotten) in a selective fashion based on the concurrent political situation. For example, the participation of the non-Turkish ethnic and non-Muslim Ottoman citizens in the Great War have been largely erased from the collective memory in modern Turkey. Armenians and Greeks were ‘traitors’ and ‘aliens’ who did not have a real place in Turkish nationhood. Turks wrongly think Arabs as a whole ‘backstabbed’ them during the war while Kurds were hardly ever mentioned until recently.”

Simsek said, “Just like all states, the Turkish state likes to add certain things at certain times, and it likes to remove some things at other times,” mentioning instances in recent history where the Turkish state promoted new memories to suit the political climate. For example, Turkey began openly including the Kurds into its historical narrative in the 1990s as one of many Muslim ethnic groups that fought in the Great War. In those days, when Turkey’s fight against the Kurdistan Workers Party had reached a crescendo, it made sense to emphasize the common history between Turks and Kurds.

Hinting at the AKP’s continuing ambitions to reshape the Middle East, Simsek said, “It can’t be a coincidence that the current government has chosen to glorify a campaign where the Ottomans attained victory in Iraq.”

That may well be true. Ibrahim Kalin, senior adviser and speaker for President Recep Tayyip Erdogan, recently declared in a press conference that, on April 29, Turkey will host the descendants of Iraqis whose ancestors fought on the Ottoman side at Kut. That victory, Kalin added, represents “a story of heroism … just like Canakkale [and] April 23” against foreign invaders.

But Mustafa Akaydin, a member of the opposition Republican People’s Party, is not convinced. Akaydin told Al-Monitor in an email interview that “canceling the April 23 reception [out of respect for the dead] while holding magnificent ceremonies for [other] occasions says much to the public about the AKP’s sincerity.”

One person who has reason to be happy for the remembrance of Kut and yet has mixed feelings about it is Mert Kut. Kut, a private citizen from Izmir and great-great-grandson of Halil (Kut) Pasa, who was one of the leading commanders of the Ottoman army at Kut al-Amara in 1916 and whose family name comes from that victory, expressed his frustration to Al-Monitor. He said the new celebration appears like an attempt to marginalize the memory of Ataturk. “No victory could be greater than the one that Ataturk won with the War of Independence [in 1922],” Kut said.

Let us hope that the AKP avoids similar disputes in the future by addressing the concerns of people like Akaydin and Kut.