Will Turkey bid farewell to secularism?

Ismail Kahraman, the speaker of the Turkish parliament, has caused a sensation by proposing a constitution that avoids any reference to secularism as the ruling party continues to promote its Islamist agenda. 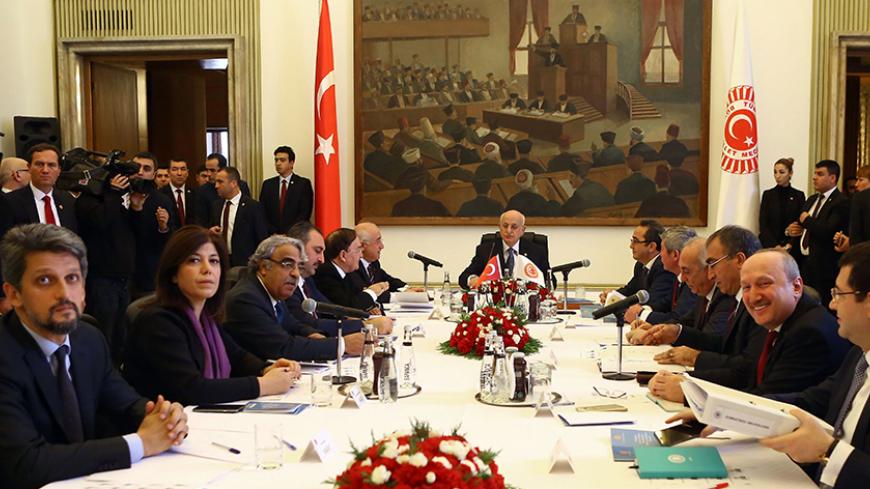 In the tranquility of Oxford, I was having a lunch with Eugene Rogan, a renowned historian and the director of the Middle East Centre of Oxford University. Last year, he had published a book, "The Fall of the Ottomans," which was deservedly listed among The Economist's top 10 best books of 2015. I mentioned something that was sure to interest him: For the first time ever, the Turkish government has issued instructions for the commemoration of the Battle of Kut.

Apart from Gallipoli — a disaster for the British military but a legendary victory for its Turkish counterpart known as “the victory of Dardanelles” — during World War I the only other Ottoman military victory was achieved at Kut, in today’s Iraq.

Also known as the Siege of Kut Al Amara, the Siege of Kut lasted from Dec. 7, 1915, to April 29, 1916. Some 13,000 soldiers of the British-Indian Army under the command of the Maj. Gen. Charles Townsend were taken prisoner and marched to Aleppo. Townsend himself enjoyed a comfortable retreat on an island until the end of the war. It is not surprising that some British historians describe the loss of Kut as the most abject capitulation in Great Britain’s military history.

Rogan received the news somberly. The great historian of World War I and the Ottomans said, “Kut is well deserved to be commemorated and celebrated in Turkey.”

He is probably right. Yet I reminded him that almost everyone in the United Kingdom, Australia and New Zealand — and of course in Turkey — knows the story and historical significance of Gallipoli and the Dardanelles. But if you ask any Turk about Kut, he or she might look dumbfounded.

The commemoration and celebration of the “Victory of Kut” and its inclusion in elementary and secondary schools’ curricula for the first time in the Turkish republic’s history may have some sinister aims.

The government apparently wants to associate the name of a military officer, Nureddin Pasha, with the commemoration. Pasha became a general long after the Siege of Kut, but he was the governor of Baghdad and Basra during the initial stages of the military campaign. Apart from his contribution to the surrender of the British forces, he made a reputation for himself as being extremely harsh to Christian minorities in Turkey and established very strong nationalist credentials.

However, he found himself in conflict with Kemalist reforms during the 1920s. For instance, in 1925, when Western hats were introduced to replace the Ottoman fez or turban, he opposed it. President Mustafa Kemal Ataturk’s loyal Justice Minister Mahmud Esad Bozkurt, who was known as a diehard Jacobin secularist, dubbed Pasha a reactionary. Ataturk himself also criticized Pasha severely. He died out of favor in 1932.

Thus, for some staunch Kemalist-secularists in Turkey, reviving the memory of Kut from the forgotten pages of archives is a nefarious attempt to further tarnish Ataturk's name by the current Islamist rule in Turkey. The move is interpreted in terms of the incipient Islamization of Turkey.

However, even if the Turkish public is not very aware of the debate around the “Victory of Kut” during WWI, it is impossible for Turks to ignore a new combustible development: The speaker of the parliament, Ismail Kahraman, suggested that the concept of secularism should have no place in a new constitution and the word “secularism” should be omitted from it altogether.

As could be expected, Kahraman's words sparked an outcry from the staunchly secularist Republican People's Party. The main opposition party's chairman took the lead in lambasting the speaker. A coalition of secularists gathered as the “United Movement of June,” a reference to the Taksim-Gezi riots that rocked Turkey in 2013, marched toward the parliament, shouting, “We will not let you to write a constitution of Sharia and caliphate!”

Though a new constitution does not look imminent, the parliament speaker’s statement can be taken as a clue of the intentions of President Recep Tayyip Erdogan in constructing a “new Turkey” attuned to his ideology.

The tension between political Islam and secularism as the mainstay and founding ideological principle of post-Ottoman republican Turkey has defined the Turkish political climate for decades. The arch-secularists have always been suspicious of the motives of the ruling Justice and Development Party (AKP) as the offspring of Turkey’s older Islamist parties. Even before it won the elections and took political power in Turkey in 2002, the AKP’s leaders, having learned the lessons of previous failures, persistently emphasized that the party has no Islamist agenda and that it should be acknowledged as a conservative democratic party, the Muslim version of Christian Democrats in the Western world.

The AKP won election after election, and as it gained self-confidence it gradually shrank to its political Islamist core. The choice for the seat of parliament speaker following the November elections testifies to that trend.

Kahraman is considered one of the “elders” of Turkish conservative Islamism. Born in 1940, he was an Islamist-nationalist student activist in the 1960s, fighting against the rise of leftist activism in youth. He was the respected and influential chairman of the right-wing Islamist-nationalist Turkish National Student Union. Former President Abdullah Gul had served as its executive, while Erdogan was only a foot soldier.

Kahraman became a leading figure, generally the chairman of various prominent organizations and civil society associations of the Islamic movement. He became the culture minister in the Islamist coalition government of Prime Minister Necmettin Erbakan from 1996 to 1997. He was a deputy from the Welfare Party of Erbakan from 1983 to 1998 — when the part was banned — and then he became a deputy for the Virtue Party until it was banned in 2001.

Kahraman remained outside of the parliament until the last elections, though he maintained close relations with Erdogan. He was the chairman of board of trustees and a founder of Recep Tayyip Erdogan University. All those who know Erdogan and Kahraman well also know the great respect the former has for the latter. Kahraman was Erdogan’s choice for speaker.

It is natural for people to associate his remarks on secularism with Erdogan's vision for the future of Turkey.

Secularism has always been a highly sensitive and controversial issue in Turkey, particularly for the Kemalist ruling elite and its spinal cord, the military institution. Whether Kahraman’s statement reflects Erdogan’s far-fetched objectives or not is irrelevant. It is certain that old cleavages will resurface and add to Turkey’s political turbulence.

Where can it lead when a leading figure in Turkey’s power structure takes a step forward toward what had previously been unthinkable? Inevitably, the question will arise: Is an Islamist Turkey possible? Some say that in today’s Middle East, despite Turkey’s European underpinnings, nothing is impossible.