More than a million Turks visited Anitkabir on Nov. 10, marking the 75th anniversary of the death of Mustafa Kemal Ataturk, the founding father of modern-day Turkey, in protest of the current Islamist-based government. 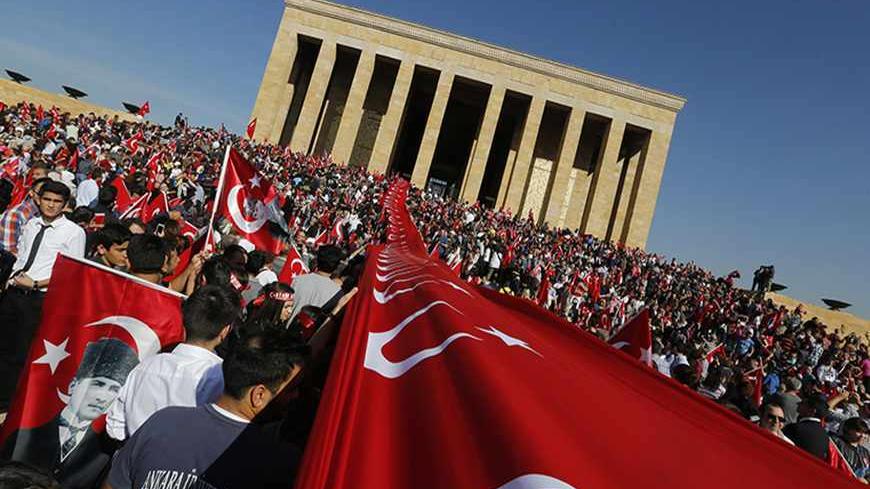 Telling the story of Turkey to foreigners who have no knowledge of the country is becoming a true challenge, especially for those critical of the policies of Turkish Prime Minister Recep Tayyip Erdogan’s government, for it risks portraying the country in an absolutely negative light. That would present an unfair image of Turkey, doing injustice to all the accomplishments that make it unique in its immediate neighborhood. Moreover, despite its downward economic outlook and the growing concerns over its current account deficit, Turkey’s economy has been doing relatively well since 2008, when the international markets were swept by monetary crisis. In this light, Turkey’s positive economic trend has had a direct impact on the betterment of the infrastructure in all the provinces, cities across the nation. It’s a direct plus adding to the growth of the country.

While acknowledging all that, one also may ask why some 1,890,615 people visited Anitkabir — the mausoleum of Mustafa Kemal Ataturk, founding father of modern-day Turkey — on Nov. 10, marking the 75th anniversary of his death. This number of people paying their respects at Anitkabir set a record. When the country was hit by its worst economic crisis in February 2001, for example, Turks did not rally in great numbers around this kind of symbolically important site to protest the government’s bad management, but they have been taking to the streets since the day Abdullah Gul was appointed by the Turkish parliament in 2007 to the presidency or, more recently, during the Gezi Park protests in June 2013. The question is, then, why there is such unrest and discontent in this society, if its democracy is being strengthened and its economy is flourishing? Why do the people feel the need to make such a statement by showing up in massive numbers at Anitkabir?

“It is purely an expression of people’s stand against [the Justice and Development Party] AKP. It is not only about the opposition to established political schools,” Tanil Bora, a researcher and an author, told the Radikal daily on Nov. 13. “People are trying to express their dismay to the AKP and the prime minister concerning their arrogant, authoritative and fascist way of ruling the country and gather around Ataturk to reflect this kind of opposition because he is a legitimate symbol for people to rally around.”

The reaction is also about the lack of clarity about what the Erdogan government really wants to achieve. Since the AKP came to power in November 2002, Erdogan has brought to the fore all the troubling pages of history in this republic’s life. He called the traumatic events of Dersim in 1937, when the state used massive force to put down a Kurdish rebellion, “genocide” and noted that Ataturk’s adopted daughter Sabiha Gokcen joined the operation as a fighter pilot, dropping bombs onto Dersim. Erdogan also likes to talk about the 1960 military coup as the source of all troubles in the country’s political life, which ended with then-Prime Minister Adnan Menderes’ execution. Then there are attempts to impose certain Islamic conservative values on the nation, such as Erdogan’s recent kerfuffle that boys and girls should not have coed accommodation — as if there were any mixed public dormitories in Turkey. The point is, though, people are confused about whether Erdogan is challenging or trying to avenge the 1923 revolution or the military coups. Which is it?

“People’s love of Ataturk has not changed at all,” Emel, who chose to withhold her last name, told Al-Monitor. She was among the crowd visiting Anitkabir on Nov.10. “But we feel like we are coming under both the state’s authoritative pressure and Erdogan’s followers. We feel like our lifestyles are being threatened, and as Turkish women we don’t want to lose all we have accomplished thanks to Ataturk. Can you believe Erdogan even made it politically incorrect to take the national pledge in our schools? I want my son to grow up knowing and appreciating the principles set forth for us — raising the nation to the best levels of developed countries.”

That is the Catch-22 as people coming out onto the streets more and more perceive Erdogan as a threat to the founding principles of modern-day Turkey as a secular democracy. In the words of Eyup Can, a prominent journalist writing for Radikal, this is now “the era of Pop-Ataturk,” where the founding father is being reintroduced into popular culture by those masses on the streets.

Bora, on the other hand, provides quite a useful list of definitions regarding the evolution of Kemalist ideology, symbolizing an absolute dedication to the principles of the founding father throughout the years. “In the '60s, Kemalism was leaning toward more to the left as it was intertwined by both anti-imperialism and nationalism. In the '70s, it lost that left tendency, and people also grew unattached to the Kemalist ideology. In the '80s, it was more like a reformist Kemalism that imposed authoritarian-fascist ideology on people prioritizing the state in all means,” Bora said. “In the '90s, Kemalist ideology called for mobilization against the Kurdish political movement and the Islamic forces. And this reactionary mood embedded an angry tendency and in some way, inaccurately, presenting the Ataturk era under a romantic light, as if it was the golden era.”

Today, it seems, as people increasingly perceive a threat from the AKP government that it may have a hidden agenda to undo all the achievements since 1923, the country yet again falls victim to a reactionary cycle. While the Erdogan government insists that it has no desire to undo the secular nature of the state, it still fails to convince the people, after a more than decade in power, that it actually doesn’t have such an intention. Erdogan’s angry rhetoric, almost at all times, and his demeanor is suggesting that in representing a “conservative democrat party” he wants all the 76 million people in the country to follow his value system. People simply react to it, and call on him to stop imposing lifestyles on people.

As a last word, though, the perception among the protesting crowds is that Erdogan is on a revenge mission. Not that these people favor or call for any military coup, but it appears that many of them have a growing fear that they could be hauled off to prison if they continue raising objections to Erdogan. Just as in the past — when the military had the power to impose its will on civilian political life, and denounced Islamists in the military as reactionaries and expelled them — today's Islamist-based AKP government is finding ways and means to use either heavy tax penalties to silence people or throw them in jail, as happened to hundreds of retired and current military personnel who came under judicial scrutiny for possibly planning a military coup that never took place to bring down the AKP government.

In the end, Erdogan’s rhetoric and way of politicking seem to have divided the people around two key figures — God and Ataturk — and with this equation it is difficult to expect any peace to rain on social cohabitation.