Turkish President Recep Tayyip Erdogan is not claiming to undo Ataturk as many believe. He is rather re-doing Ataturk. 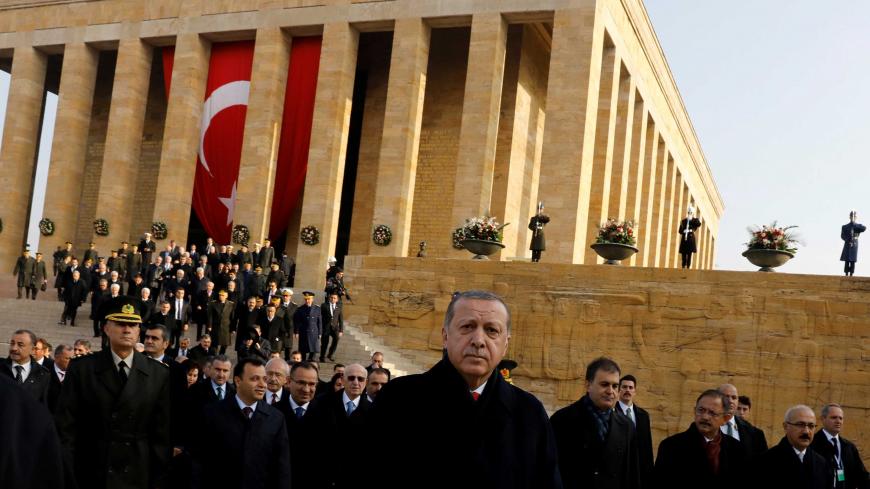 Every year on Nov. 10, Turkey commemorates the death of Mustafa Kemal Ataturk, the founder and first president of the Turkish Republic. At 9:05 a.m., the moment he took his last breath, sirens ring loud across the county, as people stop in the streets or stand silently at their workplaces to remember the “Father of the Turks,” as his surname literally means. At Anitkabir, the iconic mausoleum of Ataturk in Ankara, an official ceremony, attended by droves of citizens, is held while the media and social media are flooded with messages emphasizing Ataturk’s greatness.

This year, all these classic rituals took place. But there was something new and unusual: The political camp entrenched behind President Recep Tayyip Erdogan, which traditionally has identified itself with Islam rather than the staunchly secular Ataturk, proved more “Ataturkist” than ever before.

This usual viewpoint was first visible in the main ideological indicator of the Erdogan regime: the pro-Erdogan media, which now constitutes the overwhelming majority of the Turkish media. Newspapers that have shown only half-hearted interest in Nov. 10 commemorations before came out this time with huge tributes to Ataturk, marking an unmistakable difference in tone. Members of Erdogan’s ruling Justice and Development Party (AKP) expressed an unexpected admiration for Ataturk in their public messages. The local branches of the AKP organized free bus trips to Anitkabir and announced them with posters in urban centers. And most importantly, Erdogan himself, who had conspicuously skipped some previous Nov. 10 commemorations, led the ceremonies at Anitkabir.

This newfound love for Ataturk was certainly a novelty for the AKP, and no wonder it sparked dozens of columns in the Turkish press. “The Mujaheeds to Anitkabir,” a popular columnist amusingly wrote, contrasting the AKP’s Islamist roots with Ataturk’s secular visions. The contrast was clear, and that is probably why Erdogan himself felt the need to respond to those who criticized him and his party for this change of tone. “We will protect Ataturk’s legacy,” he vowed at a conference organized for honoring Ataturk at his presidential palace. He also promised to save this legacy from “the ideological bigotry that instrumentalizes his name.”

Why did Erdogan need to make this emphasis? And what is the reason for this latter-day reclaiming of Ataturk by the Erdoganists?

The first answer to this question is the presidential election of 2019, the winning of which is now the most important goal for Erdogan. Unlike in the parliamentary elections he won repeatedly since 2002, a vote fluctuating between 40% and 50% of the electorate will not be enough this time. Erdogan needs to win more than 50% of the vote, and everybody seems to agree that this is a very risky threshold. The conservative Islamic voters, on which Erdogan has traditionally relied, are just not enough to give him more than half of the nation’s mandate. He also needs to appeal to what traditionally has constituted the “center right” of Turkish politics, which had always represented a pragmatic middle ground between pro-Ataturk secularists and pro-Islamic conservatives.

A recent political development that may have boosted this political need is the “Good Party” that was founded in late October. Led by charismatic female politician Meral Aksener, the party seems to be an effort to revive the center right, which had vanished from the scene since the early years of the AKP. Polls suggest that the Good Party has rapidly gained popularity as high as 16% of the votes, making Erdogan’s AKP go down to 38%. Embracing Ataturk would be a smart tactic to regain some of those voters who moved from the AKP to the Good Party.

The second answer to why Erdogan now embraces Ataturk is more strategic and conceptual: Erdogan is willing to present himself as the “second Ataturk,” the second savior-founder of the nation, and it is much easier to do this by claiming the legacy of the first Ataturk. This tendency has become increasingly clear in the past three years, as I explained in Al-Monitor last year, in the usage of Ataturk symbolism by Erdogan. This includes Erdogan’s claim to lead “Turkey’s Second War of Liberation,” after the first one Ataturk led in the aftermath of World War I, and his choosing of Samsun, the city where Ataturk launched the war of liberation, as the place to launch his electoral campaigns.

Yet there is an important nuance between the image of Ataturk with which Erdogan now identifies and the image of Ataturk that Turkey’s “Ataturkists” have traditionally upheld. In the latter one, Ataturk was a Westernizer who secularized his nation with top-down “reforms” during his absolute presidency from 1923 to 1938. Erdogan and his followers understandably skip those un-Islamic themes. The Ataturk they rather like is the anti-Western war hero who saved the motherland from the occupation by European imperialists in 1919-1922. This also allows them to argue that Erdogan is not “undoing Ataturk,” as the Ataturkists typically claim. Erdogan, in this view, is only re-doing Ataturk by making Turkey “independent” again.

Ironically, Erdogan not only claimed this new tailor-made Ataturk in his Nov. 10 speech, but also condemned those who “misrepresented him.” The latter included the main opposition Republican People's Party (CHP), the very party founded by Ataturk. “We will not let any party like the CHP abduct Ataturk from our nation,” Erdogan declared. “We will understand him and talk about him as our nation’s Mustafa Kemal … the veteran of our War of Independence.”

To me, this was yet another confirmation of a truism I have been reiterating for a while: The official ideology of Erdogan’s “New Turkey,” if there is any, is not “Islamism,” as some Westerners seem to think. It is rather Erdoganism. The latter is a blend of Islamism, Turkish nationalism, anti-elite populism, moralism, nepotism and opportunism. It may even include, as we can now see, a rightly redefined dose of Ataturkism.