How Ataturk became a model for Erdogan

Although Erdogan’s ideology is very different from that of Mustafa Kemal Ataturk’s, he wants a similar role — that of a savior-founder who will rule Turkey single-handedly. 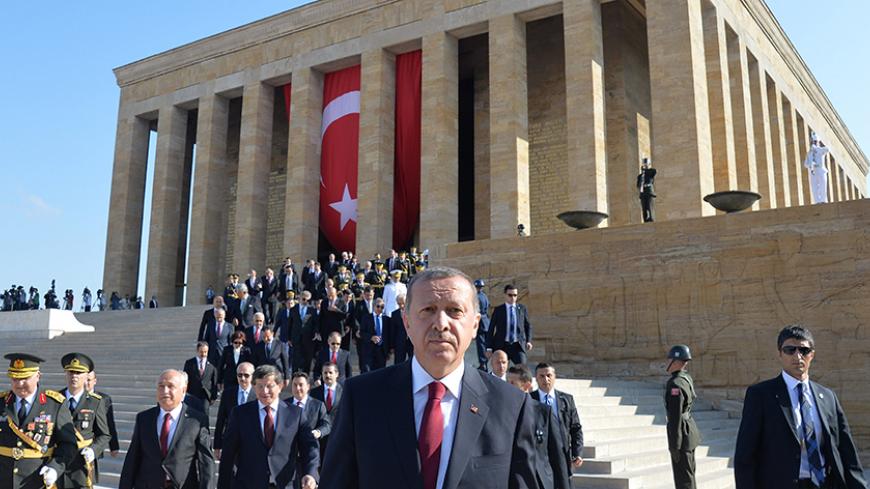 Since he was elected as Turkey’s president in August 2014, Recep Tayyip Erdogan has been hoping to redesign the Turkish Constitution to introduce an executive presidential system. The July 15 failed coup put that discussion aside for a moment, but not for long. Last week, the leader of the opposition Nationalist Action Party, Devlet Bahceli, who has lately emerged as a political ally of Erdogan, announced that his party could help the ruling Justice and Development Party (AKP) take the presidential system to a referendum. As a result, political observers began to expect a referendum in early 2017. In fact, government spokesman Hayati Yazici made the plan clear by noting that a constitutional amendment may come to the parliament in January and that a referendum could be held in April.

Given Erdogan’s popularity, which was only boosted with the public reaction to the coup attempt, the referendum would very likely get a “yes” vote. This would be followed by an election to choose the new president, a second ballot that Erdogan could easily win. Erdogan, in other words, may well be the first leader of the second Turkish Republic whose political system will revolve around an executive presidency.

What kind of presidency would this be? An answer to this question came from Justice Minister Bekir Bozdag, an Erdogan confidant, last week. “[Mustafa Kemal] Ataturk’s era was presidential system in action,” he said, asking, “Can you name any prime minister of that era with the exception of [Ismet] Inonu? You can’t.” This reference to Ataturk surprised some observers, because the conservative/Islamic political camp that Erdogan and his party comes from has traditionally not been a fan of Ataturk and his staunchly secularist era. Turkish-American academic Timur Kuran noted the irony here, tweeting: “Turkish Islamists have treated Ataturk's regime as a destructive dictatorship. Now AKP uses Ataturk to justify its own monopoly of power.”

In fact, references to Ataturk are not new in the latter-day AKP. When Erdogan launched his election campaign in 2014, he initiated it in Samsun, the city where Ataturk had famously launched Turkey’s War of Liberation (1919-1922). Since then, Erdogan has defined his political struggle as “Turkey’s Second War of Liberation,” a claim he repeated with more emphasis in the aftermath of the failed coup. In August 2014, right after being elected president, Erdogan wrote that “the gap” that emerged between the Turkish people and their president after Ataturk’s death had been closed only with Erdogan's election.

These positive references about Ataturk by Erdogan and his supporters are not surprising because although Erdogan’s ideology is very different from that of Ataturk, he is embarking on a similar historical role: Ataturk was an undisputed savior-founder who ruled Turkey single-handedly for decades. Erdogan, too, is now gradually becoming an undisputed savior-founder who may rule Turkey single-handedly for decades.

These parallels can be also seen in the cult of personalities created around Erdogan and Ataturk, which are quite similar. The term “baskomutan,” or commander in chief, was a common word for Ataturk and is now becoming a common word for Erdogan in the media. Similarly, the word “reis” (chief), which has become a common title for Erdogan among supporters, is as powerful as “ata” (father), which traditionally has been used for Ataturk. Fine arts are also used to mobilize the masses for the leader, as the newly produced “Erdogan March” is very similar to the “Ataturk March” of the past. A 2014 book had even called Erdogan “The Sun of the Age,” mimicking a term used for Ataturk throughout the 20th century.

To repeat, none of this means that Erdogan and Ataturk represent the same ideology. Quite the contrary — their worldviews are almost opposite. Ataturk was a secular nationalist who aimed to Westernize the Turks with a revolutionary break from the Ottoman past. Erdogan is an Islamist and Ottomanist who wants to undo some of the Westernizing of the past century. But despite their different ideologies, the two leaders seem to share similar personalities and political ambitions. They both have wanted to lead their nation with a strong hand, without nuisances such as separation of powers and limited government, toward what they see as the ideal.

That should explain why Erdogan is interested in not only guiding Turks’ politics, but also redefining their history, erasing their “bad habits” such as alcohol and tobacco and even their right type of bread to eat. One of his main goals is to “raise pious generations,” just as Ataturk wanted to raise secular generations — not individuals who will decide on their own ways. Just like Ataturk, Erdogan is also interested in reshaping Turkey’s universities, which, just like the judiciary, now opens the academic year with a ceremony at Erdogan’s presidential palace. That palace, also called “Bestepe” because of its location, is becoming the heart of the nation, just like “Cankaya,” or Ataturk’s presidential palace, was. Erdogan also has vowed to cleanse the universities of the professors engaged in “high treason,” which often simply means inappropriate ideology, in a way very similar to the “university reform” Ataturk introduced in 1933 in order to purge “backward-minded” academics.

All this proves is that the centurylong critique of the Ataturk model, or Kemalism, by Turkey’s religious conservatives was quite different from the liberal critique of Kemalism, although the two sometimes converged. Liberals have typically opposed Kemalism for being an inherently authoritarian political model. Religious conservatives, however, were apparently only troubled by the content of that authoritarian model. When they found the right content under the right leader, all their troubles with an overbearing state came to an end.

This also means that we should expect more from Erdogan if he stays in power at least for one more decade, which seems quite possible with the presidential system that he may achieve in the next year. Just like Ataturk, he is not interested only in governing the affairs of a nation, but also in refashioning it in his own image. And just like Ataturk famously said after winning the War of Liberation, he may be “beginning just now.”