The 'who loves Erdogan more' contest

In the AKP universe, even those who dare to criticize President Recep Tayyip Erdogan feel the need to note that they love the great leader more than anybody else. 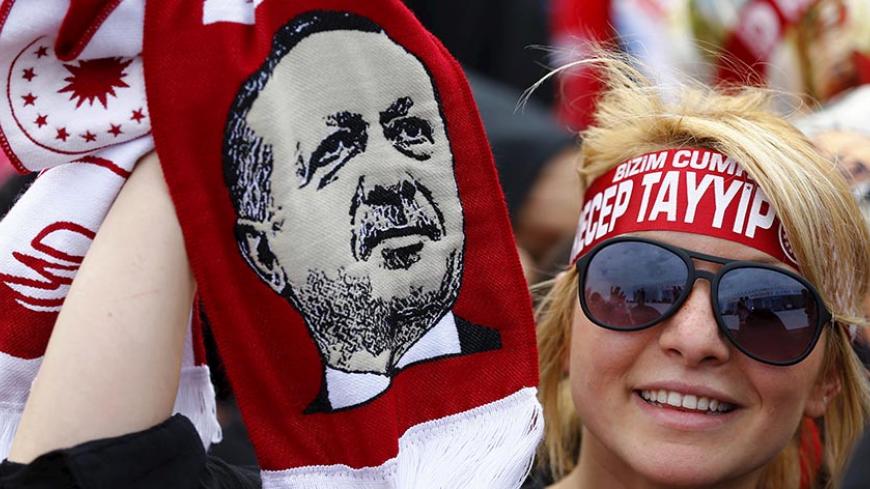 A supporter of Turkish President Recep Tayyip Erdogan waves a scarf with an image of the president during a ceremony to mark the 562nd anniversary of the conquest of the city by Ottoman Turks, in Istanbul, May 30, 2015. - REUTERS/Murad Sezer

Akif Beki, one of the rare pro-Justice and Development Party (AKP) columnists of Turkey’s top daily, Hurriyet, wrote an interesting op-ed June 30 titled “The plan to isolate Erdogan.” The piece was a critique of the die-hard pro-Recep Tayyip Erdogan “public intellectuals” who lashed out against every criticism against the great leader.

“If there is really a plan to isolate Erdogan as it is argued, and if there is really a demonic ‘mastermind’ behind this heinous plan,” Beki argued, “those who cling tightly to Erdogan these days, supposedly to protect him from the warnings of his own [ideological] neighborhood, must be working precisely for this goal. These low-life executioners who attack all sorts of people with repulsive insults, and who have no common sense, are the agents the mastermind must be using to isolate Erdogan behind a defense line of barbed wire.”

Then Beki explained his own past of solidarity with Erdogan, which went back to the late 1990s. According to him, the newly formed cadre of apparatchiks around the president, who try to isolate him “in a world of delusion and apprehension,” were just charlatans.

The next day, one of the people who Beki probably anonymously targeted, Cem Kucuk, columnist for Star, an unabashedly pro-Erdogan daily, fired back. The real “sly, demonic” people are people like Beki, Kucuk argued, who behave like “belly dancers” because they began to blame Erdogan right after the setback in the elections.

Now this is one of the many examples of a war of words that has been taking place in the AKP universe, in which “the party” and “the media” are quite integrated. On one hand, there are spotless Erdogan venerators, who argue that every act of opposition against the great leader is part of a global conspiracy against the glorious “New Turkey” he is building with unmatched wisdom and courage. On the other hand, there are others, like Beki, who feel that this paranoid-aggressive rhetoric is helping neither Erdogan nor the AKP or Turkey.

Looking from the outside, people like Beki make much more sense. And if the AKP will be restored back to moderation, reason and civility one day, it probably will be thanks to them. But the ideological medium in which they are operating looks somewhat beyond hope, for it makes them feel obliged to be part of the who-loves-Erdogan-more contest. This definition was coined in February by a rare voice of sanity in the pro-AKP media, Sibel Eraslan. In a critical piece on the words of yet another spotless Erdogan venerator, she asked whether Erdogan’s much-dreamed “presidential system” is all about “a president and a couple of journalists.” This image, Eraslan added, gave rise to the “who-loves-the-president-more contest.”

In practical terms, this means that to rise up in the AKP universe (i.e., the party or the media), the No. 1 criterion one needs to fulfill is to be staunchly loyal to Erdogan and to be noticeably fierce against his enemies, real or perceived. Notably, what is at work here is not ideology as such, but more of a cult of personality. No wonder many of the Erdogan venerators who have climbed up many ladders fast are not Islamists, not even religious conservatives, but seculars who call themselves “democrats.” Meanwhile, some Islamists who fail to subscribe to the cult of personality are brushed aside. Or, they still exist in the AKP universe and take the risk of criticizing Erdogan, but only in private conversations.

Levent Gultekin, a notable AKP-supporter-turned-critic, recently wrote an open letter to these disillusioned Islamists in the AKP universe, calling them to come out of the closet. “While you speak to each other, you admit how bad things have become,” Gultekin wrote. “But when you write publicly, you still keep venerating Erdogan. You criticize not Erdogan, but the latter-day apparatchiks around him. But these people did not come to those positions by themselves. Erdogan chose them.”

Looking from a historical perspective, the scene in the AKP universe of today looks similar to the era of Mustafa Kemal Ataturk (1923-38). Then Ataturk, or the “Father of the Turks,” was venerated as the savior of the nation, whereas his political opponents were condemned as traitors to the country. Ataturk’s full control over the whole state apparatus had created a culture of sycophancy. Businessmen who were close to Ataturk and his party were among the beneficiaries of corruption. And among Ataturk’s dedicated supporters, the suggestion that he might have erred in any of this, or at any issue, was unthinkable.

Even in the following decades, the “Kemalists,” as they were called, passionately argued that everything Ataturk did was absolutely right. If there was anything indefensible, the blame would go not to Ataturk but “the bad advisers” around him or his “second man,” Ismet Inonu, who actually did his best to curb the excesses of the regime. And the relatively critical Kemalists would often begin their arguments by saying that they actually love Ataturk more than their more rigid comrades.

The political culture Erdogan has established in the AKP in the past five years, more or less, is really an imitation of this Kemalist model. For sure, Ataturk and Erdogan are very different personas. Ataturk was secular, Westernist and elitist. Erdogan is religious, Muslim nationalist and populist. Yet, the top-down hierarchies they built, and the who-loves-the-great-leader-more contests they presided over, are remarkably similar.

The better news is that the cult of Erdogan will probably not be as durable as the cult of Ataturk. The Turkey of the 21st century is incomparably more open, diverse and unmanageable than the Turkey of the past century. Moreover, Erdogan is vulnerable to something to which Ataturk was not: the ballots, as we saw June 7. Hence, the coming of a post-Erdoganist Turkey will probably take much less time than the coming of the post-Kemalist one.