Will Erdogan be Turkey’s next Ataturk? 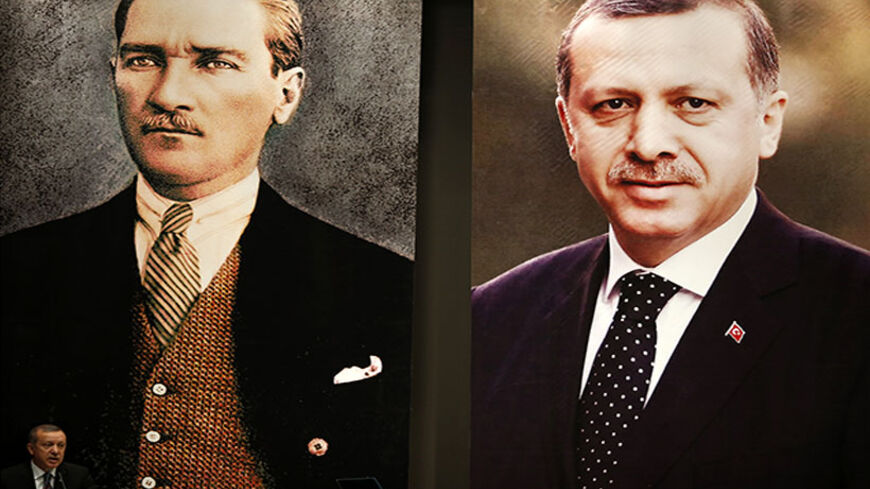 Turkey's Prime Minister Recep Tayyip Erdogan addresses the audience at his ruling Justice and Development Party (AKP) headquarters in Ankara, with images of Ataturk and Erdogan in the background, June 25, 2014. - REUTERS/Umit Bektas

Turkey’s Prime Minister Recep Tayyip Erdogan initiated his campaign for the August presidential elections in Samsun, a city on the Black Sea coast. After speaking at a crowded rally joined by tens of thousands of supporters, he headed to his next stop: the northeastern city of Erzurum. Notably, for anyone with a basic knowledge of Turkish political history, the selection of these two cities was not random. For these were the very first two stops of Gen. Mustafa Kemal, later named Ataturk (Father of the Turks), when he moved from Istanbul to Anatolia in 1919 to initiate Turkey’s War of Independence (1919-22) against occupying armies.

No wonder Erdogan underlined the historical parallelism. In Samsun, he said, “We are taking the first big step in Samsun, the city of big beginnings. Gazi Mustafa Kemal took the first step of the War of Independence here.”

Recently, there have been other references by Erdogan and his team to Turkey’s founding father. In the wake of the local elections on March 30, for example, he declared himself to be the leader of Turkey’s “second war of independence,” a clear reference to the original war that Ataturk led. When his aides began promoting the system of an all-powerful presidency in 2012, which Erdogan hopes to realize at some point, they also referred to Ataturk as an example.

This is very interesting, because until very recently Ataturk and his political legacy was a theme that religious conservatives almost always criticized. So, should we understand this newly discovered interest in Kemalism as a sudden change in conservative ideology and identity? Probably not, because the pro-Erdogan conservatives are still very critical of the ideological components of Kemalism such as authoritarian secularism and ethnic Turkish nationalism. Yet, they now seem to partly admire, and imitate, the methods Ataturk used to accumulate and consolidate power.

The adoption of the classical Kemalist method of delegitimizing opponents — condemning them as enemies within, and agents of dark foreign powers — is one clear example. Erdogan, who once opposed this conspiratorial narrative when he himself was its target, quickly adopted it during the Gezi Park protests and took it to new levels since his confrontation with the Gulen movement.

Then there is the method of creating a cult of personality. Like Ataturk, Erdogan is now being glorified by his supporters as a savior whom the nation has been waiting for for centuries. Like the "Ataturk youth," there is now an "AKP youth" (Justice and Development Party) who see Erdogan simply as a faultless leader and deride all his critics as unfair, if not unpatriotic. They even adopt Kemalist slogans by adding puns, such as proclaiming "Adam izindeyiz" ("Man, we follow your footsteps") instead of "Atam izindeyiz" ("[Founding] Father, we follow your footsteps").

All this can be trivialized as political narrative, but it does matter because it seems to serve a political design: an all-powerful presidency Erdogan aims at creating for himself, giving him the powers that no Turkish leader since Ataturk ever had.

Under this “presidential system,” which Erdogan’s supporters have been advocating passionately, the all-powerful president would have a prime minister who is insignificant and would act as his secretary. Hence, he would control the entire executive system. If the AKP keeps dominating parliament, as expected, the same president would control the legislative, too. Since the president would have the power to appoint many members of the high judiciary as well, one can expect that also he would prevail on the judiciary. (Plus, the ongoing hunt of the "parallel state" within the judiciary could give the president the basis to purge all undesired elements among judges and prosecutors.)

In other words, if Erdogan becomes the president he wants to be, Turkey could once again go back to the “unification of powers,” which was Ataturk’s lifelong principle, in a clear contrast to the “separation of powers” principle that Montesquieu defined as the foundation of democracy in the 18th century. Add to this the self-styled powers of Turkey’s presidency, such as the power to appoint all university presidents and Erdogan’s growing control of the media, and a staggering power would accumulate in the hands of one man.

To be fair, one must acknowledge that if Erdogan achieves all this power, he will do so thanks to ballots. Ataturk never competed with his rivals in free and fair elections. Therefore, Erdogan’s accumulation of power would be more “democratic” than that of Ataturk. Yet still, it would be a highly illiberal democracy.

The question is why Erdogan wants and needs all this power. Only to “serve the nation,” as he claims? Or merely for the sake of power itself? Or, like Ataturk, to realize a grand project of transforming society according to his own vision? Or all of the above?

Both Erdogan and his supporters deny that they have such plans for transforming society or “social engineering” — a term that traditionally has been used to define the cultural revolution of Ataturk and his followers. It also is clear that the Turkey of the early 21st century is a much less manageable society than the Turkey of the early 20th century — with today's diverse civil society, media, educated public and broad access to the global world.

Yet still, there is enough reason to suspect that Erdogan indeed has plans for a social engineering of his kind, and fit for his time and milieu. His self-declared goal of “raising a pious generation,” and the related designs he brought to the education system, are one important sign. Erdogan’s recent steps also made it clear that he is willing to use state resources to promote and sponsor the Islamic communities that he prefers. One can also expect more limitations by the state on the visibility of “un-Islamic” practices, such as alcohol or bikinis. Worries that Turkey will turn into a “Sharia state” such as Saudi Arabia are just too far-fetched, but if Erdogan stays in power for 10 more years, as is his aim, he can make the conservative-Islamic identity the dominant one in both state and society — as the secular identity once was.

What Erdogan probably does not take into consideration, however, are the unintended consequences of such social engineering: The backlash from the identity that you suppress, and the intellectual enfeeblement of the identity that you sponsor. In other words, in 10 years from now, Turkey could be a country where all the creative ideas and trends come from the secularists in opposition, whereas the Islamists in power could be increasingly dull and narrow-minded. That, I believe, would not be a great service to Islam.