In the absence of well-grounded institutions, politics in Turkey often devolves into a battle of personalities, as we see now between Turkish Prime Minister Recep Tayyip Erdogan and Islamic scholar Fethullah Gulen. 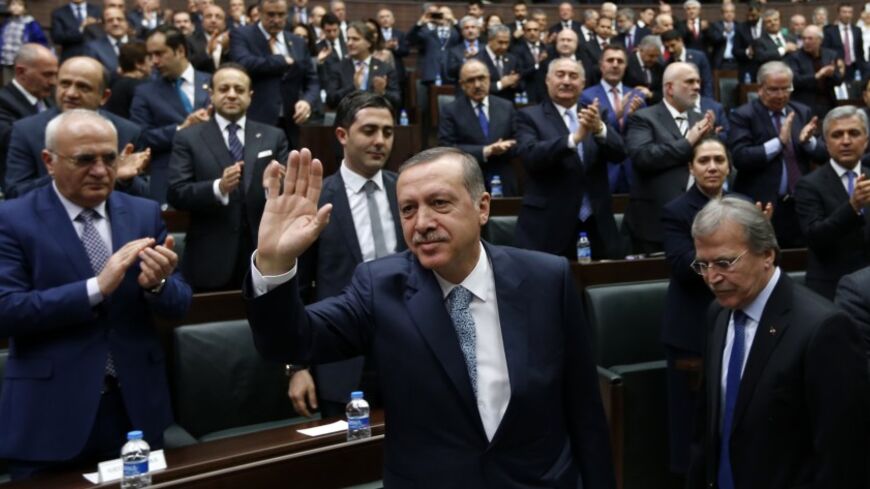 Turkey's Prime Minister Recep Tayyip Erdogan greets his supporters as he arrives for a meeting at the Turkish parliament in Ankara, Feb. 25, 2014. - REUTERS/Umit Bektas

On Feb. 26, Turkey’s Prime Minister Recep Tayyip Erdogan celebrated his 60th birthday. On Twitter, though, some of Erdogan’s devoted supporters gave an additional meaning to this important date. Their hashtag went viral in just a couple of hours: #milletindogumgunu, which literally means “the birthday of the nation.”

In other words, according to these people, Erdogan is the embodiment of his whole nation.

This inevitably reminded me of another political line in Turkey, which also sees its venerated leader as the personification of the whole Turkish nation. Kemalism glorifies Turkey’s first president, Mustafa Kemal Ataturk, as the “father” of all Turks. (In fact, the surname Ataturk, given to him by the Turkish Grand National Assembly, literally means “the father of Turks.”) No wonder Kemalists did the exact same thing with Ataturk's presumed birthday of May 19. That date has been celebrated in Turkey for decades as the birthday of Ataturk and the Turkish nation. The Education Ministry's website still promotes the infusion of the birthdays of the "supreme leader" and his nation.

More similarities between Kemalism and the nascent Erdoganism have emerged in the wake of real or perceived political attacks on Erdogan. Last December, during a public rally in Istanbul, some young supporters of Erdogan greeted him wearing T-shirts emblazoned with the slogan “Adam izindeyiz,” which means “Man, we are following you.” This was clearly a pun on the famous Kemalist slogan “Atam izindeyiz,” which means, “Father, we are following you.” (The word “adam,” in this context, means not just any man, but a righteous man.)

At another Erdogan rally in December, in the northern city of Trabzon, some of his fans welcomed him wearing white shrouds, symbolizing that they are ready to die for him and go to the grave. This, too, was very similar to the common Kemalist mantra, “Father, you rise up and let me instead go to the grave,” which is a line in a famous poem memorized by every Turkish primary school student.

To be sure, these two cults of personality, built around Ataturk and Erdogan, are not the only ones in Turkey. A third character who also enjoys the image of an all-knowing, all-wise demigod in the eyes of his fans is Abdullah Ocalan, the jailed leader of the Kurdistan Workers Party (PKK), which Turkey considers a terrorist group. When he launched a guerilla war against the Turkish state in 1984, Ocalan quickly became the “people’s leader,” a term implying that he is the chief of the whole Kurdish nation. His commandments are known to be absolute, as devotion to him is intense. When he was arrested by Turkish intelligence in 1999, for example, several PKK supporters set their bodies on fire merely to protest the imprisonment of their leader. Since then, Kurdish young people have continued to immolate themselves for the sake of Ocalan.

It is probably not an accident that all these venerated leaders have similar epithets: Ataturk is the “Father” (Ata), Erdogan is the “Master” (Usta) and Ocalan is the “Leadership” (Onderlik).

The leaders of religious communities, too, often have absolute authority over their followers. Islamic scholar Fethullah Gulen, whose followers are now engaged in a bitter political war with Erdogan and his party, is known to be the voice of authority as his sermons and declarations are always the final word — not only for himself, but for the whole movement. Many other Islamic communities are known to operate under the force of the personalities of their own leaders, which are typically venerated and obeyed and never questioned or criticized.

Of course, not every Turkish citizen follows such charismatic leaders, but a considerable portion of society does, and that is why the political scene is dominated by the interaction between different cults of personality. This interaction is sometimes marked by cooperation and coalition-building, but more often by tension, enmity and political war.

These political wars are often very bitter, because within every camp, there are too many die-hard supporters who see their leader as infallible. This leaves no room for self-criticism within the group, while all energy is focused on criticizing and condemning others. Since those other groups make the unforgivable mistake of opposing the infallible, righteous leader, they are more than rivals with differing views and interests. They are traitors to the nation. They serve the evil “dark powers” that want to weaken, destabilize and enslave Turkey. So they need to be cornered and crushed.

Surely, such polarizing views are found in other societies as well, even in some liberal democracies. (The passionate polarization in the United States between the conservatives and the liberals is no small matter.) However, those liberal democracies also have traditions and institutions that soften the polarization and curb the excesses of political fanaticism. Meanwhile, there are surely much more illiberal societies than Turkey, but since many of them are autocracies, they have little chance at the kind of political fights that Turks experience.

The trouble in Turkey is that while the country seems to have all the institutions of a democracy, the society lacks a key feature that is strong in Western liberal societies: individuality. Therefore, democracy does not work as a process that makes millions of individuals engage with each other from their diverse perspectives. It rather works as a zero-sum game in which a few clear-cut political camps always battle with each other. The result is an endless series of coups, purges and witch hunts — and incredible political wars such as the one that is going on now.