Melih Gokcek is stepping down from his position as Ankara's mayor after 23 years, following a weekslong standoff with President Recep Tayyip Erdogan. 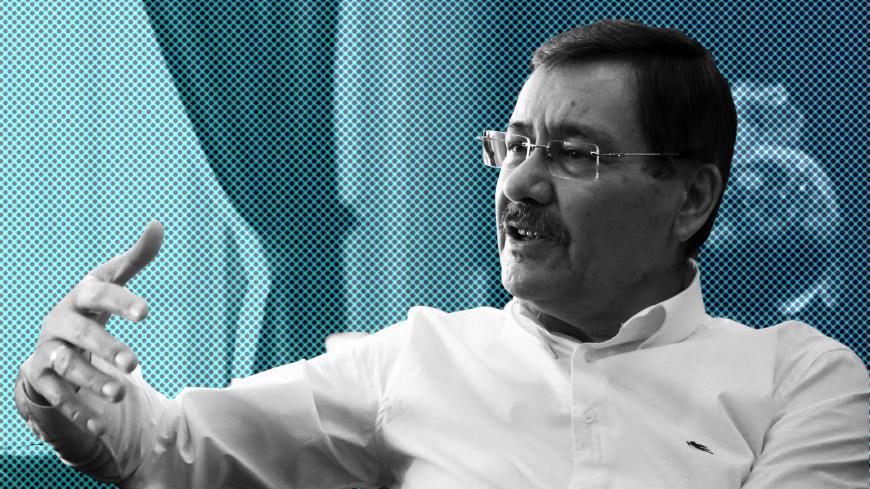 Heeding President Recep Tayyip Erdogan’s “orders,” Ankara Mayor Melih Gokcek resigned Oct. 28 after 23 years in office, joining four other mayors who have stepped down under pressure over the past two months. Gokcek’s resignation, however, resonates beyond the internal jitters in the Justice and Development Party (AKP) as his legacy in the capital represents an urban illustration of how Turkey’s rulers have sought to settle scores with the secular republic.

Throughout his 23 years in office, Gokcek stirred controversy by destroying places of symbolic importance for the modern Turkish republic that Mustafa Kemal Ataturk created on the ashes of the Ottoman Empire in 1923. He opened to construction the Ataturk Forest Farm, a sprawling green area that Ataturk had created in the capital. He tore down Ataturk’s Marmara Mansion on the farm and amended construction rules in the vicinity of Ataturk’s mausoleum, allowing for the construction of tall buildings that would block the imposing view of the mausoleum, which sits on a hill overlooking the city.

Gokcek also ordered the demolition of the Iller Bank building — another legacy of Ataturk and a first-degree heritage site — and then posed triumphantly on the rubble in what seemed an open show of revanchism. The cleared area was then added to the yard of an adjacent mosque.

According to Tezcan Karakus Candan, the chairwoman of the Architects Chamber’s Ankara branch, Gokcek’s stint as mayor “put under threat” a highly symbolic area between Ankara’s districts of Ulus and Cankaya, where the heart of Ataturk’s republic beat. “All those demolitions had a common meaning — the notion of destroying the [secular] regime was reflected on city space,” she said.

Gokcek’s controversies were not limited to urban affairs, extending also to the arts. He had one of the first sculptures of the republican era, “Water Fairies,” removed from a downtown square to a warehouse. In another memorable outburst, he said he “spits on this kind of art” as he removed an award-winning nude sculpture on grounds of obscenity.

Yet, what has haunted Gokcek the most are the never-ending allegations of corruption. Back in 1998, he was briefly detained on suspicion of tender rigging and running a criminal gang, but the investigation was inconclusive. In more recent years, members of the main opposition Republican People’s Party (CHP) have filed dozens of criminal complaints against him, but the Interior Ministry, which greenlights the prosecution of senior officials, never sanctioned a probe. Even when AKP heavyweight Bulent Arinc publicly accused Gokcek of “selling Ankara plot by plot” to the Gulen community, prosecutors decided there were no grounds for judicial action.

After robust government support for years, the countdown for Gokcek began Oct. 2, when Erdogan demanded the mayor’s resignation as part of in-house cleansing, which he says is an effort to rejuvenate the AKP against signs of “fatigue.” Gokcek refused to heed the demand immediately, which resulted in threats he would face expulsion from the party and then an investigation by the Interior Ministry.

When he finally announced his resignation, Gokcek offered no explanation on why he had to step down. “I am resigning not because I believe I failed or I am tired or because of any other concern,” he told reporters, stressing he was simply complying with Erdogan’s “orders.”

For Abdullatif Sener, an AKP co-founder …, the resignations of Gokcek and the mayors of Istanbul, Nigde, Duzce and Bursa before him demonstrate how imperious Erdogan’s rule has become.

For Abdullatif Sener, an AKP co-founder and former deputy prime minister who fell out with the party several years ago, the resignations of Gokcek and the mayors of Istanbul, Nigde, Duzce and Bursa before him demonstrate how imperious Erdogan’s rule has become. “Legally, the president cannot remove mayors," Sener told Al-Monitor. "So, why did the mayors acquiesce? They must have feared that bigger troubles would befall them [if they resisted]. They apparently thought that they could be accused and imprisoned, and stepped down to avoid going through something worse.”

Indeed, if the government was able to use the threat of a probe against Gokcek, logic dictates that he has something to fear. “That’s the most crucial point,” Sener said. “If the mayors have committed crimes, covering them up is against the norms of the rule of law. So, this means that the president’s wishes determine who goes on trial and who does not in Turkey today.”

Some have speculated that the in-house cleansing is part of Erdogan’s purge of Gulenists ahead of a critical presidential election in 2019. Sener said that “Erdogan himself is linked” to the Gulenists, referring to the alliance between the AKP and the Gulen community in the past. “Erdogan and those in the higher echelons of the state did favors [to the Gulenists], and now they are attempting to punish everybody for that,” he said.

The way Gokcek was forced out even drew criticism from the secular quarters that used to be his chief critics, including Candan, who has faced off with Gokcek in countless court cases over urban issues. “We do not approve of the way they sent him off,” she said. CHP leader Kemal Kilicdaroglu, another longtime adversary of Gokcek, has said, “Those who come in via elections are supposed to go out via elections.”

The forced resignations of elected AKP officials have irked the party’s own as well. Pro-government columnist Abdulkadir Selvi, for instance, warned earlier in October that the process “has begun to wear down both the AKP and the public in general.”

What political consequences could the party face? According to Sener, the internal shake-up is likely to compound the confusion that many AKP supporters feel amid the massive crackdown on alleged Gulenists since last year’s coup attempt. “So many people have been expelled from their jobs without any justification, and now the removal of party officials … is raising suspicions among the party’s own grass roots. Those actions will cost the party votes in the 2019 elections,” he said.

For many in Ankara, Gokcek’s resignation was a cause for celebration, with some even dancing in the streets. Others staged a demonstration, demanding a trial for Gokcek. The Architects Chamber filed yet another criminal complaint against him for abuse of power and “the destruction he caused in Ankara.”

When it comes to Gokcek’s replacement, the question has generated little excitement in terms of democratic competition. His successor, after all, will be determined not according to merit or through some real election at the municipal assembly, but simply by Erdogan’s choice.