Freedom of expression in the arts and entertainment have been under mounting government pressure to toe the AKP's conservative line or face sanctions. 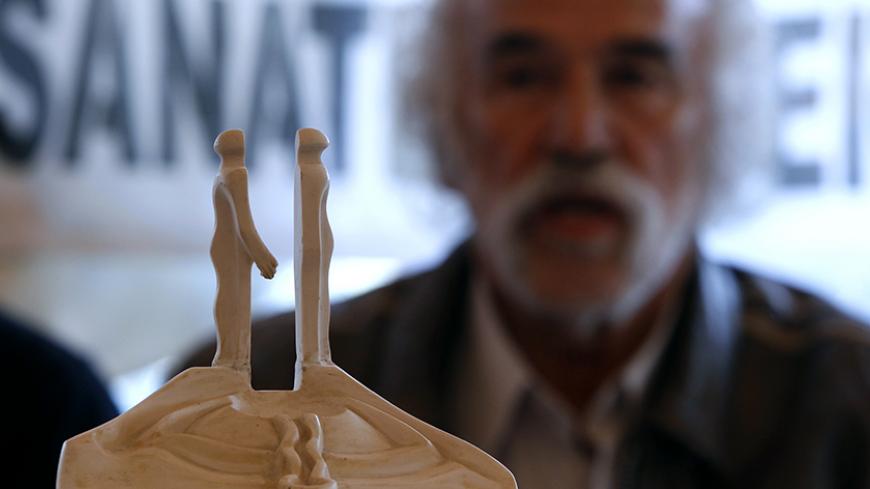 Turkish artist Mehmet Aksoy is seen behind a model of his sculpture during a news conference in Istanbul, Jan. 12, 2011. The fate of a giant peace monument symbolizing reconciliation between Turks and Armenians has caused a row in Turkey after Prime Minister Recep Tayyip Erdogan branded it "monstrous" and called for its demolition. - REUTERS/Murad Sezer
Sukru Kucuksahin
July 11, 2016

At a graduation ceremony in June, students of Istanbul’s Bilgi University unfurled a banner targeting the ruling Justice and Development Party (AKP). It read, “They hate arts and science, but say nothing to rape and theft.”

Why the AKP’s approaches to arts and rape have come to be compared is a long story, going back 22 years, when Melih Gokcek was narrowly elected Ankara's mayor on the ticket of the Islamist Welfare Party. Today, Gokcek belongs to the AKP and is still the capital’s mayor. Following his election in 1994, Gokcek, irritated by “nudity,” launched a war on sculptures in Ankara’s streets and parks, having many of them removed. One particular sculptures led him to utter words that have gone down in Turkish political history: “I spit on this kind of art,” he said of the piece, which depicted two women dancing and had been created by Mehmet Aksoy, a leading Turkish sculptor. President Recep Tayyip Erdogan, mayor of Istanbul at the time, said he “fully agreed” with his counterpart in Ankara.

In 2011, Erdogan, then prime minister, made headlines for calling a sculpture a “monstrosity.” The massive piece, dedicated to Turkish-Armenian friendship and in the process of being erected near the border between the two troubled neighbors, was dismantled and removed. Of note, the offending sculpture was, again, a work by Aksoy, who eventually won a libel suit against Erdogan but could do nothing to stop the demolition of the work. These two cases embody the AKP’s approach to arts, the impact of which has become increasingly tangible across Turkey.

In May, the AKP youth branch in Izmir — one of the rare cities where the main opposition Republican People’s Party (CHP) holds the local administration — staged protests demanding the removal of a statue by a Spanish artist on the ground that it was obscene. “The nude male sculpture openly exposes children to sexual exhibitionism and disturbs citizens,” said the AKP’s deputy provincial chairman, Onur Selbi, of the statue, which had been on display for four years at a subway station. Several days later, another AKP member wrapped a cloth around the effigy’s crotch and later repeated his protest, but that time padlocking the cloth in place. Finally, on May 27, the statue was attacked and damaged with a sledgehammer in broad daylight.

Around the same time, Turkey was rocked by a child sex abuse scandal after a Quranic studies teacher was arrested for raping and molesting boys — 45 of them, according to some accounts — at dorms run by a religious foundation close to the government. AKP quarters, so sensitive about an “obscene” statue’s effect on children, remained mum. Hence, the Bilgi students’ banner juxtaposing the ruling party’s attitudes on arts and rape.

The war on sculptures has, however, continued. A piece by a Vietnamese artist on display outside a cultural center in a CHP-run district in Bursa was vandalized with wet paint in early July. Two months earlier, AKP members had protested another statue, “Adam and Eve,” a gift to Bursa from a Ukrainian sculptor, on the grounds that Islam prohibits the depiction of prophets.

In Ankara in May, a bronze statue by the internationally acclaimed Turkish sculptor Ilhan Koman vanished without a trace from a popular park in the heart of the city, where municipal security guards are constantly on watch. The municipality said the statue had been “stolen,” but many, including the head of the local Architects Chamber, remain unconvinced.

“What were the security guards doing at the time? Could it be that they were the ones to take the statue away?” asked Tezcan Karakus Candan in remarks to Al-Monitor. “Doing arts has become a realm of serious struggle, and we are closely following this.”

The onslaught on the arts and artists has not been limited to the genre of sculpture. No one had expected Erdogan to follow the example of the German statesman Willy Brandt, who in the early 1970s turned down an offer of support by a group of artists and intellectuals, including the novelist Gunter Grass, on the ground that arts are about freedom and critical thinking against the holders of power. Yet few had imagined that government pressure would reach its current scale of Erdogan and the AKP's hostility to criticism and dissent, the very essence of arts.

Erdogan openly targeted artists and celebrities who backed the mass anti-government protests in 2013, vowing “to bring them to account.” He has routinely sued satirists, with his fury recently crossing borders. While government friendly musicians, actors and writers are frequent guests at Erdogan’s palace, those critical of him and the AKP are never invited. Ugur Isilak, a singer who dedicated a song to Erdogan, had even made it to parliament as an AKP lawmaker.

The pressure and meddling did not stop there, as the AKP has become bent on pushing arts and entertainment to toe its conservative line. The producers of the popular TV series "Magnificent Century," for instance, had to adjust the attire of their characters, while others had to marry off their fictional couples because the AKP disapproved of extramarital cohabitation.

In theater, Turkey’s leading troupes have been deprived of state funding, which is now reserved for those who embrace the AKP's standards. Not even world-famous Turkish pianist Fazil Say, a vocal AKP critic, has escaped sanction.

Meanwhile, the state-run opera and orchestras have stopped signing new artists in the past five years, blocking a major avenue for young talents in the field. While the government boasts of how fast it completes mega construction projects, it has been dragging its feet for eight years on building a new opera house for Ankara.

The climate created by the government has emboldened citizen vigilantes to take matters into their own hands, like the mobs that have attacked art galleries in central Istanbul for serving alcohol at openings.

Eren Aysan, head of the Culture and Arts City Council in Ankara’s Cankaya district, worries that things could get even worse with the planned creation of an arts institution to run publicly funded activities in the cultural and artistic fields. “The draft law amounts to disabling and emaciating [existing] institutions. It opens the arts to rent seeking and will bring about serious problems for writers and artists,” Aysan told Al-Monitor.

“We’ve already seen what they mean even before the bill has been passed,” Aysan added. “Disciplinary proceedings have been launched against actors of the Istanbul State Theater for expressing critical views on Facebook. … Three actors of the Istanbul City Theater face expulsion for the same reasons, while [popular actor] Levent Uzumcu has already been expelled for [critical] comments he made on CNN International.”