A Turkish court has ordered President Recep Tayyip Erdogan to pay compensation for disparaging a statue dedicated to Turkish-Armenian friendship as a "monstrosity," leading to its demolition. 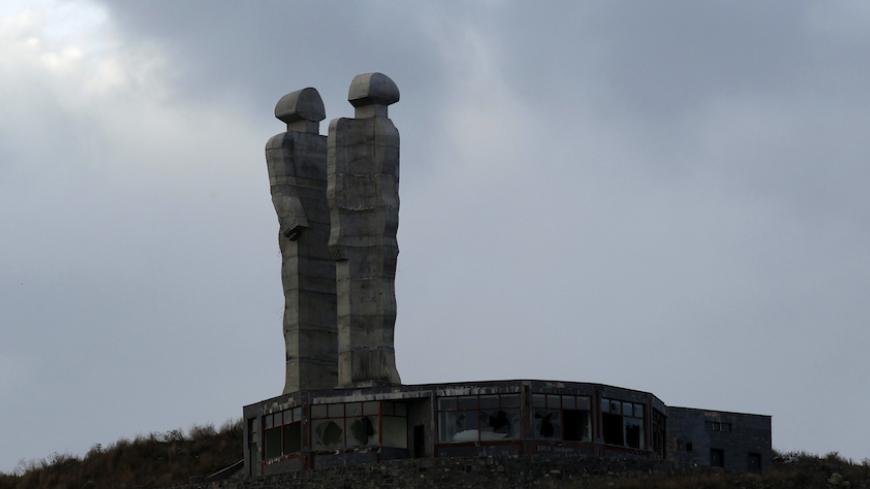 The peace monument by Turkish sculptor Mehmet Aksoy in Kars, northeastern Turkey, is shown in this image taken on Jan. 9, 2011, before its demolition. - REUTERS/Umit Bektas

Last week, a Turkish court ordered President Recep Tayyip Erdogan to pay 10,000 Turkish lira ($3,800) in compensation to the sculptor of a monument dedicated to Turkish-Armenian friendship, a piece Erdogan famously called a “monstrosity.” The outcome of the legal case, loaded with historical and political baggage, stands out in a slew of authoritarian and oppressive rulings from the Turkish judiciary in recent months.

Sculptor Mehmet Aksoy's "Monument to Humanity," erected atop a hill overlooking Kars, not far from the Turkish-Armenian border, featured two 35-meter-tall (115 feet) human figures, one holding an open hand toward Armenia. The work was commissioned by the Kars municipality, held by the Justice and Development Party (AKP), in 2006 at a time when the AKP government was making diplomatic efforts to reconcile with Armenia.

The process resulted in the signing of bilateral protocols that envisaged the establishment of diplomatic ties between Turkey and Armenia, the recognition of their existing border and the reopening of border crossings. Under the protocols, inked in Zurich in October 2009, the two sides also pledged to avoid policies contrary to good neighborly relations, condemn all forms of terrorism, extremism and violence and develop a new relationship based on peace and mutual understanding.

The process, however, hit a snag in January 2010, when Armenia’s constitutional court expressed its reservations concerning the 1915 genocide after Yerevan referred the protocols to the court, as required by law. The protocols were eventually frozen amid reluctance on both sides.

Erdogan, then prime minister, slammed the Monument of Humanity as a “monstrosity” during a trip to Kars on Jan. 8, 2011, in an outburst that led the municipality to demolish the statue.

The broken pieces of the 350-ton monument remain on municipality grounds as the hapless scapegoat of the deep-rooted enmity between the two neighbors. Aksoy, who devoted years of arduous work to the statute, was, of course, deeply frustrated.

“I felt as if my children were being beheaded. I could do nothing. They had blocked all legal means,” Aksoy told Al-Monitor. The statue, he explained, was meant to be a message against war and an appeal for an end to the tension and blood feud with Armenia over past wars, massacres and other atrocities.

Aksoy believes the monument fell victim to political machinations. He said, “When Erdogan came to Kars, he reacted as if he had not been aware of the statute, as if we had erected it overnight. In fact, he was maneuvering to consolidate his reactionary base in the run-up to elections.”

He added, “Some [local ethnic] Azeris had also denounced the monument, saying it was extending a hand to Armenia. In fact, it was a hand reaching out to all humankind. But people interpret sculpture like reading coffee grounds. Erdogan took advantage of this sentiment and bagged the vote of local Azeris, drawing us into his political maneuvers.

"Besides political interests, he did it because [Islamists] see sculpture as idolatry and have an aversion to it. Hence, he killed two birds with one stone."

The sculptor sued Erdogan for calling the statue a “monstrosity,” and the case wound up on March 3. In the defense Erdogan submitted to the Istanbul court, he argued he had the right to dislike the monument and had used the word “monstrosity” in the sense of “something very weird and strange.” The court, however, ruled that “monstrosity” was an insult and ordered Erdogan to pay Aksoy 10,000 Turkish lira in compensation.

The ruling was a refreshing move by the Turkish judiciary, which has recently made headlines with a series of rulings of an authoritarian and oppressive nature. During his term as prime minister and now as president, Erdogan has sued a wide range of media workers, from columnists and reporters to editors and cartoonists, winning most of the cases. The judiciary has also been under fire for arresting people accused of “insulting” Erdogan on social media, for keeping journalists behind bars and for dismissing the large-scale corruption probes of December 2013.

Aksoy was, of course, happy with the ruling, but worried for the fate of the judge. He said, “The compensation decision shows that we still have judges who uphold justice. But let’s see what will happen to this judge now.”

Asked about what he would do with the compensation money, the sculptor replied, tongue firmly in cheek: “It is haram money. I’ll throw a party on March 21 to booze with my friends, so the haram money will go back to haram.”

The sculptor still hopes to rebuild his demolished statue. He said he planned to take the issue to the European Court of Human Rights, optimistic that the court would rule in favor of the monument’s restoration. “People visiting Kars still want to see the Monument to Humanity. Locals take them up the hill to show the site where it stood,” he said. “The monument is living on in its absence. Hence, it deserves to be put back there.”