Erdogan government takes on the theater

The ruling Justice and Development Party (AKP) is struggling to micromanage independent arts as its own scheme of “conservative art” fails. 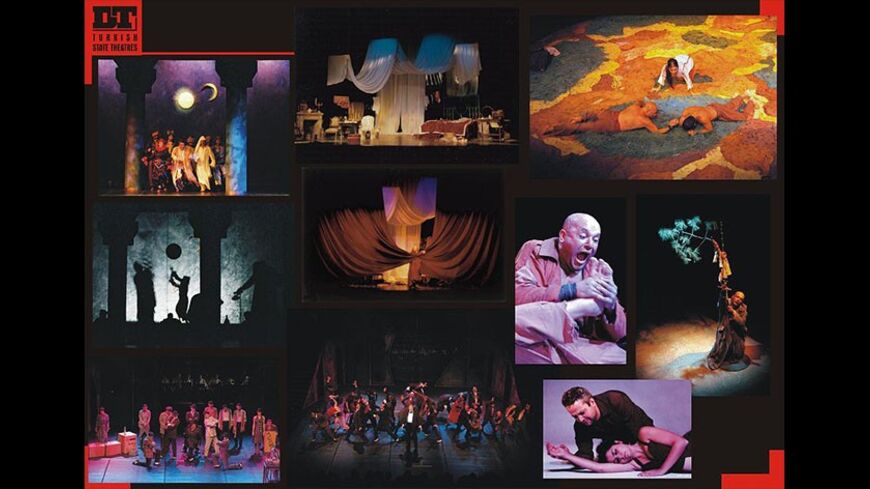 Late in the evening of March 8, bulldozers took out more than a hundred ancient oriental plane trees from the gardens of an Ankara theater. Reactions from the public and actors pleaded with the government to await a court's decision. Several hashtags are trending on social media to support that theater in particular, the theater in general, and also condemning the tree “massacre” in the middle of the night.

Dedicated followers of Al-Monitor’s Turkey Pulse at this point might feel a sense of deja vu, since the Gezi Park protests started as a reaction to the bulldozing of trees in the park in the early morning hours of May 31, 2013. Gezi protesters have reacted to the Justice and Development Party (AKP) administration’s desire for grand commercial projects, razing buildings at the cost of fast diminishing green spaces in the cities.

The AKP’s relationship with the arts has been challenging. In January 2011, Turkish Prime Minister Recep Tayyip Erdogan visited Kars province on the border of Turkey and Armenia. He reacted to a statue as a “monstrosity.” This was the “Statue of Humanity” erected to depict the beginning of reconciliation in Armenian-Turkish relations in 2009. The renowned artist Mehmet Aksoy had to witness the demolition of his “twin babies” in April 2011 following Erdogan’s statement. Erdogan’s advisers asked tongue-in-cheekily, “Does not the prime minister have the right not to appreciate art?”

The AKP’s uneasy relationship with the arts hit rock bottom with theater. To encourage the nascent arts in 1940, the Turkish Republic established “state theater.” Although it might sound as if this were a state-run operation, it has been quite independent over the years. Government support for the arts enables classic plays to be produced. These public theaters have offices in several cities, and every year they tour the country to bring theater to several smaller provinces. Their tickets are affordable in comparison with private companies.

The AKP has introduced the debate of “privatizing or shutting down” public theaters after a controversial move to regulate the theaters’ by-laws in early 2012. When actors and the public protested the idea, Erdogan replied, “Who are you, you despotic intellectuals? Theater is not under your rule anymore. Your time has passed.” It was around that time that AKP intellectuals confessed, “We cannot conquer the arts despite all of our efforts”; hence, the AKP introduced a vague concept of “conservative art.”

This is a concept that requires an elaborate analysis. I refer to it as “vague” because I could not find any evidence to show how the AKP’s “conservative art” projects flourish. However, one Salafist-Islamist friend over coffee suggested I should ask, “Is the AKP compatible with art of any sort?” Indeed, the AKP’s women branches have established an amateur theater. In their 20-minute play, the actresses compare their living conditions in the last decade — the AKP era — and provide embellished praise for the government. I am not sure if this is an example of “conservative art,” but I am quite confident that it reeks of cheap government propaganda. The best explanation I have seen about conservative art came from the actors protesting the AKP’s attempts to turn art into a conservative project. I was also irked to see how similar the pain and suffering of Turkish artists was to their Egyptian colleagues' under the brief rule of the Muslim Brotherhood.

Survival for private theater companies is not easy in Turkey. Several private theater ensembles were refused partial government aid on the basis that they were suspected of supporting the Gezi protests. In addition, the Ministry of Culture issued a decree after Gezi, asking all private theaters to endorse the ministry to receive financial aid. The decree states that if these companies produce plays that are against “common public ethics,” they will have to return the funding to the government, with interest, within 15 days.

Opposition parties have been tireless in support of different art projects against the AKP’s restrictive policies. CHP (the main opposition Republican People’s Party) Deputy Vice Chairman Umut Oran told Al-Monitor, “A government that opposes art, also opposes humanity. We, as CHP, will stand by artists and freedom of expression of all kinds.”

I had the privilege to communicate with quite a few contemporary artists struggling to stand tall under political pressure. Iraz Yontem, a young but experienced actress, playwright and director — a Renaissance woman who is involved in every stage of the theater with pride and passion — told Al-Monitor: “Since we are a private theater company focusing on political plays, there is no way we could expect government funding. Our theater has been closed down by the government twice. Our theater is categorized as a profit-seeking company, which makes us liable to pay hefty taxes. We are continuously fundraising.” Yontem also shared an unsettling experience with Al-Monitor. She explained that her company applied for funding from the European Union. “However, the EU informed us that we were not eligible to apply because the Turkish government did not contribute to the pool of money for arts this year,” she said.

In 1994, when Erdogan was running for mayor of Istanbul, a time when he was more open to receive questions from a variety of journalists, a woman journalist asked him what he thought of ballet, and more specifically how Erdogan would feel if a ballerina were to shake his hand. Erdogan’s reply, “My first advice would be for you to quit your job. Because we know what ballerinas promote, what she does, whom she appeals to. I would not support any sort of ballet if funding was required from the mayor’s office, because the majority of my constituency would be against this.”

On Feb. 4, in Germany, Erdogan was asked about the Gezi Park protests. He complained, “I had the vision of constructing an opera building in Taksim — where Gezi Park is located — but they would not let me.” Yet, he has not commented about the kind of operas he enjoys. It is more the buildings, construction and grand projects that seem to occupy Erdogan’s wish list. Art offers alternatives in times of desperation, providing a medium for those who lack a voice. No wonder Erdogan has been at war with even soap operas.

In public, for years Erdogan has been arguing that state-sponsored theaters, opera and ballet should be shut down. Just like the private tutoring halls, the AKP opts to "shut down" what it fails to permeate with its own influence. The AKP has failed to provide its desired “conservative art” to serve as an instrument for political power. In the meantime, it is working diligently to curtail the accessibility of arts for the public. In Turkey, art that criticizes the ruling elite in an allusive manner has reached the most attractive and productive level. Might it be wise for the AKP to question if there were any historical examples when political power has conquered art in the long run?