Why are Turkey's conservatives obsessed with sex?

Conservatives in Turkey use sexuality as a tool to control society, the latest being the ban on wearing "tights" by staff of the state opera. 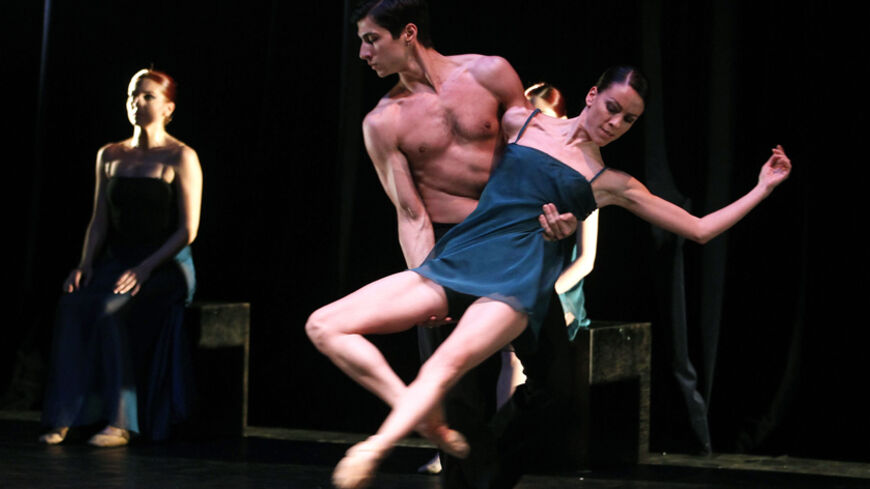 Dancers from the Minyatur Ballet of Turkey perform during International Dance Day in Algiers, May 2, 2013. - REUTERS/Louafi Larbi

On Oct. 1, the new general manager of the Turkish State Opera and Ballet, Selman Ada, issued new rules for employees, declaring that "athletic wear, tight cotton shorts, tights, stretch jeans, sandals, slippers, spiked high heels, formal evening gowns, etc., may not be worn on the premises." The new rule made the headlines in mainstream media — “no more tights for opera and ballet” — and generated uproar on social media. Prominent journalist Ceyda Karan, puzzled by the decision, tweeted, “If in operas and ballets [performers] cannot wear tights, what are they to wear?” Subsequently, an explanation came from the Turkish State Opera and Ballet stating the ban does not apply to the performers onstage, but is meant for the other staff members.

Social media users recalled Recep Tayyip Erdogan’s words from 1994, when he was the mayor of Istanbul. While talking to a female producer, Erdogan had gone on record saying, “If you were a ballerina, my first advice to you would be that you should quit that profession.” Erdogan added, “Cultural imperialism nowadays aims to engage audiences with matters below the belt.” In 1995, he said, “The Istanbul municipality does not fund any ballet institutions. If it did, I would not approve funds for it, because I have to abide by the wishes of those who voted for me.”

Actress Yaprak Ozdemiroglu reacted to the news on dress code regulations for ballet and opera staff by tweeting, “Why not ban women all together? We will all be saved!”

Ozdemiroglu makes a crucial point as many bizarre examples of sexual politics by the conservatives in Turkey have been accumulating over the last decade. For instance, on Sept. 28, Yusuf Kaplan, a columnist for pro-government daily Yeni Safak wrote a column titled, “Not Erasmus, 'Orgasmus,'” describing Erasmus students as being obsessed with sex and hedonism. Erasmus is a European Union international student exchange program that serves over 37 countries of which Turkey is one. Kaplan argued that 1 million babies have been born out of wedlock due to this exchange program, and commented that these youth signal a demoralized generation of Europeans.

Kaplan’s Erasmus babies' analysis resonated with many Turks following Erdogan’s comments in November 2012 on a prominent sitcom, “Magnificent Century,” inspired by the life of a glamorous Ottoman sultan, Suleiman. The focus of the show was the world-renowned love affair of Suleiman with Hurrem Sultan. The soap opera achieved impressive success in international markets and has been exported to over 40 countries. Erdogan, referring to the show as if it were a documentary, declared, “We do not approve of that show. That is not how our ancestors lived.” Erdogan was particularly critical of the focus on Suleiman's love life and the intrigues at the palace's harem. The sexual encounters as well as the actresses' costumes were criticized for being “too revealing” and not appropriate. The Turkish Radio and Television Supreme Council warned the producers of the show multiple times about depicting Ottoman sultans as immoral and oversexualized.

The obsession with sexuality can be confusing, even for Turks. On Sept. 15, Ismail Akkiraz, the vice chairman of the Saadet Party — a party with a more conservative agenda than Erdogan's Justice and Development Party (AKP) — at his party’s gathering told the crowd, “Due to AKP’s inadequate policies, our youth do not know how to practice ablution, and 60% go around 'cunup' [not following the rules of Islam and showering after sex].” What kind of scientific research was done to reach these numbers is unclear, but the announcement was mocked relentlessly on social media. Baris Balcioglu, a professor of industrial engineering at Sabanci University, tweeted, “Humor will never cease around here, look now our youth goes around cunup.”

While a secularized section of society considers these statements and new rules and regulations of Turkey's sexual politics as humorous and unrealistic, these issues definitely get all sections of society talking. That is how Sibel Uresin, a marriage counselor who was allegedly employed by different AKP municipalities to give speeches about family values, became famous in Turkey. Uresin made the headlines in March 2011 with the statement “I offered my friend to my husband.” What Uresin meant was that she had suggested her husband marry her friend as a second wife, in a polygamous setting. Uresin is known for her relentless campaign for legalization of polygamy and adaptation of Islamic rules and regulations into the civic code in Turkey. Uresin’s arguments are rather provocative. She contends that all men cheat, but if they are allowed to have four wives they will not cheat. She has also no problems with a 12-year-old girl marrying a 60-year-old man, as long as the girl has reached puberty. However, Uresin is adamantly against coeducation, or coed housing for college students, and she has made it clear that gay men should not be allowed to be around other men, either. In a mind-boggling way, she explained, “Being gay is haram and gay men hanging around other men, or being alone with another man, is more so haram.” Since early 2011, Uresin has appeared on TV news shows, and almost always managed to make the headlines with another idea about happy family life and Islam’s halal sexual practices.

Erdogan had gone on the record about the affair of an opposition leader caught on tape, justifying it is acceptable to watch and share this kind of information because it is not private. In December 2013, Erdogan said, “This is not private but public, because he was not with his wife. Then it is not private. We cannot view adulterers as victims.”

Why are conservatives so obsessed with sexual issues in Turkey? Oray Egin, an outspoken journalist for the Turkish daily Sozcu, based in New York and Istanbul, told Al-Monitor, “Whenever I see a Turkish cleric of Islam talking about sex in the public domain, I immediately assume that it is a personal issue for them. It could be out of either envy or obsession caused by self-suppression. Because they can't openly express their own sexual problems or desires, they meddle in other people's lives and probably live vicariously through them. To put it more simply, they constantly obsess over what they don't have. Some sort of a covetous behavior perhaps.”

As provocative as he is, Egin highlights many sore points about sexual politics in Turkey. Under Erdogan's leadership, the conservatives have gained more power and visibility in politics than ever before. They aim to uphold the Quranic verse of “command right and forbid wrong” to establish stability. Here, sexual politics is one of their most important tools to control society. The conservative base considers it to be the duty of the state to fight moral wrongs involving unsolicited mixing of the sexes, polygamy, women’s clothing, abortion, right to employment and education.

An observant Muslim woman, Leyla, who was asked by her bureaucrat husband not to share her last name, told Al-Monitor, “The more we talk about these issues, the more norms change. Only a few years ago, none of my friends at the women’s gatherings would be even willing to discuss second or third wives for our husbands. Now we see younger generations [in their early 20s] viewing polygamy as acceptable. They openly debate about qualities of sister-wives.” As Leyla has discovered, younger generations of pious Muslims already display the effects of sexual politics in Turkey.