Angry about the attention LGBT pride month has received during Ramadan, some conservative Muslim men complain about discrimination against Muslims in Turkey and say that, according to their religion, they should have the right to marry more than one woman. 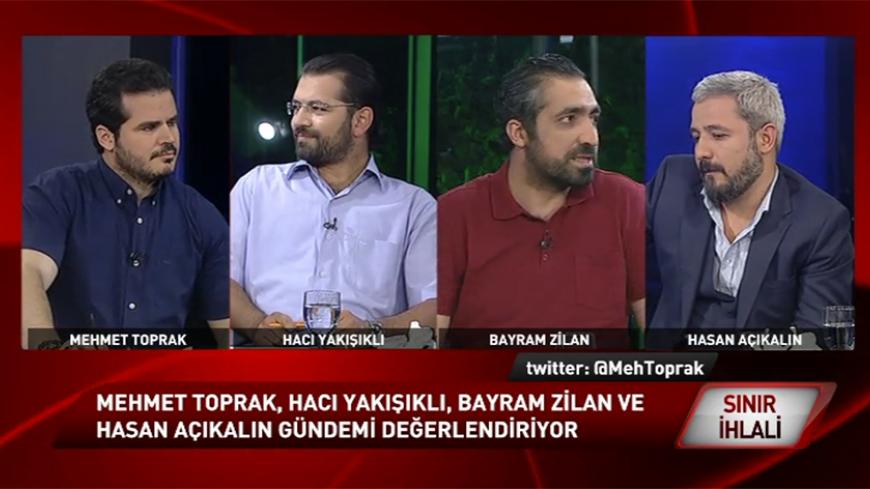 An all-male panel debates whether Muslim men are free to observe their religion in Turkey, with two guests criticizing restrictions on polygamy, on the pro-government TV channel Kanal A, June 18, 2016. - Kanala.com/tr

Are Muslim men free to observe their religion in Turkey? That was the question debated June 18 on pro-government TV channel Kanal A by four male panelists. The answer was intriguing, as two guests said, “No, Muslims are not free. For example, they cannot get married according their religion. The laws of secular Turkey dictate just one wife, so Muslims cannot take a second or third. Similarly, they cannot get rid of a restaurant that serves alcohol in their neighborhood.”

The guests were bothered that the Western world tries to impose its own views as if they are universal values, and they said that whenever Muslims in Turkey speak up against this, pro-Western media in Turkey blow it out of proportion, presenting Muslims as bigots and their demands as bigotry.

The four men spoke with intensity about how Muslim men in Turkey suffer under secular laws, and how the rights of "marginal" groups (the participants argued that the lesbian, gay, bisexual and transsexual communities make up only a tiny percentage of the population) are protected, but Muslims’ sensitivities are ignored. They said all those groups have more freedom in Turkey than do Muslims.

As participants discussed social media posts during Ramadan by those who do not observe the fast and how provocative the commentary is about Muslims, their discussion generated furious and amused reactions on social media. Several tweets and news from left-wing media outlets labeled the commentators bigots and perverts. On Eksisozluk, a popular public information-sharing network, the headline “Mujahedeen who suffer because they cannot marry multiple wives” started to trend, ridiculing the idea.

The Kanal A show was interesting in a couple of ways. First, as they were criticizing the West for attempting to impose its values on Muslim societies, the commentators were also arguing for individual "freedoms" based on gender. They complained that even same-sex marriage is legal in several countries but still Turkey does not recognize their demands for Islamic marriage. Second, they employed a language that completely ignored women. "Men" could be substituted for their use of "Muslim." For example, “Muslims are not allowed to have multiple spouses” really means "Men are not allowed to have multiple spouses."

Levent Gultekin, a columnist for the Diken network who comes from a conservative background, told Al-Monitor, “Here, 'Muslim' is a word used to specifically address Islamist, conservative groups — not everyone whose religion is Islam.” Indeed, by using words such as pious, observant and believer, the commentators also reiterate the importance of this distinction.

So are pious Muslim men free in Turkey? Are their rights constrained? Gultekin told Al-Monitor he believes all segments of society face scrutiny. For example, if one decides not to fast during Ramadan, he has to face criticism from his pious circle of friends, but the same sort of scrutiny applies to those who decide to observe their religious duties in a secular setting. “In that sense, no individual is free in Turkey because we all face peer pressure,” he said.

Considering that the Sunni Muslim patriarchal society is dominant in Turkey, pundits rarely question if men in this category ever feel discriminated against or ridiculed. So are their needs being met in society? Al-Monitor sought opinions from several different Islamist groups and theologians. Most of them turned down our request to talk, claiming they did not wish their names to be associated with the four men on the TV show.

Polygamy is a particularly taboo issue in Turkey, but the experience is more common than most people realize. Although the practices of taking multiple wives and marrying younger than 17 are illegal, there is no law that forbids religious marriage known as imam nikahi (marriage by the imam). At one time, imams were required by law to demand an official marriage certificate to sanction an Islamic marriage. This was done to protect women and minors, as Islamic marriage has no legal binding status.

However, the Constitutional Court nullified this law in May 2015. Several prominent lawmakers have argued that the change encourages polygamy. Indeed, a law professor specializing in marriage legalities, who asked to remain anonymous, told Al-Monitor, “The influx of Syrian refugees has revived the tradition of polygamy. In nearly 80 percent of all polygamy cases, we see that financial security and dowry are the main reasons. Islamic marriage does not investigate the age of the prospective wife. She does not even have to be present at the ceremony. Neither do imams in Turkey have the power to ascertain whether the prospective husband already has another wife at home.”

So are Muslim men really suffering because they cannot take multiple wives in Turkey? This is not a question the Turkish public is ready to discuss, mainly because Turkish President Recep Tayyip Erdogan has not addressed the issue.

Young people in Turkey are more comfortable speaking about the issue than are middle-aged men and women. A female college student who is studying theology and describes herself as a pious Muslim spoke to Al-Monitor on the condition of anonymity. “You cannot find respected female scholars in Turkey speaking about this issue, because it is seen as shameful. Yet after a decade of watching sitcoms of the Ottoman Palace, every man yearns to be a sultan with a harem. The odd point is, most of the guys in my department who are observant Muslims have not even gone out on a date with one girl. If my husband wanted to bring home another wife, I would demand divorce, which is our right. The man can have multiple wives if the wives give consent. I would not,” she said.

When asked whether Muslim men are free in Turkey, the theology student said, “Well, if LGBT groups can freely make demands and same-sex marriage is discussed, then of course polygamy will be discussed loudly as well.”

Fatih Dortbudak, a student at Harran University in Sanliurfa, provided a somber perspective. “I do not want to focus on the television commentators’ words, but Islam permits a man up to four wives. The legal restriction curtails not necessarily the experience, but the official standing of a Muslim. Because when a man wishes, he takes in a second wife with Islamic marriage. I do not advocate polygamy, but we must acknowledge what Islam says,” Dortbudak told Al-Monitor.

Dortbudak noted that the current law discriminates against second wives, who lack all legal spousal rights in the eyes of the law.

Al-Monitor surveyed about 100 people in Istanbul, Sanliurfa, Ankara, Trabzon and Diyarbakir, asking them whether Muslim men are free to practice their religion in Turkey. Most respondents over 35 did not like the question and refused to answer it directly, instead engaging in philosophical discussions as to what freedom entails. College-age respondents, however, were willing to discuss it and were pragmatic in their replies. They highlighted matters such as the ban on growing beards as a public employee, "women-friendly" spaces in mosques as well food restrictions.

Dortbudak said, “We cannot say Muslim men are free in Turkey. But we cannot say they are not free neither. Our leaders, our president and government are true Muslims. However, the state structure is based on secular principles. There has been impressive progress in the last decade. Everyone can perform salat [prayers] at government offices now, can attend Friday prayers freely. Yet there are still grievances. For example, coeducation is a serious concern for Muslim students. Even though rules are being revised, they still do not meet all the requirements of Islamic law. The only way freedom can reign is when the land is governed by God’s laws.”

Indeed, Dortbudak hit the bull's-eye of what is the approaching battle for Turkey’s soul. How long can the country sustain patchwork changes of laws and regulations in an effort to satisfy pious Muslims?