The Turkish authorities have launched a judicial probe into more than 400 people involved in the country’s cinema industry, fueling concern that the arts and culture realm is next in line for purges. 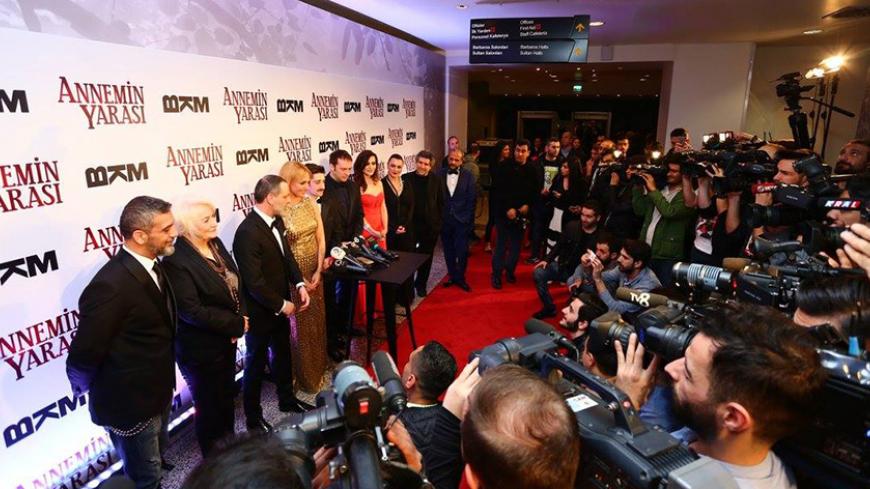 Members of the cast and crew of the Turkish film "Annemin Yarasi" ("My Mother's Wound") pose for cameras at the film's premiere in Istanbul, March 9, 2016. - Facebook/istanbullutfikirdar.icec

The judicial onslaught that hit Turkish academics and journalists after the failed coup attempt in July 2016 has now turned to actors, directors, screenwriters and other members of the country’s cinema industry.

Hundreds of academics had signed a Peace Declaration in January 2016, calling for an end to a military crackdown against Kurdish militants in residential areas in the Kurdish-majority southeast that claimed also civilian lives and devastated cities and towns. The signatories immediately faced judicial probes and many lost their jobs in the purges that followed the July 15 putsch. Now, the authorities have launched an investigation into 433 members of the cinema industry who had signed a joint statement in support of the academics.

The academics were accused of “insulting” state authorities and spreading “terrorist propaganda,” and their supporters from the cinema industry are now being probed for “praising criminals.” None of the academics have been convicted thus far, meaning they are not officially “criminals” yet. Hence, the new probe appears to lack any legal ground.

Whether the prosecutions will result in punitive measures remains to be seen, but they have already become grounds for sanctions in the professional lives of the accused. Members of the cinema industry fear they will be pushed out of the sector, just as many academics who signed the Peace Declaration were fired from their universities through legislative decrees, a tool the government obtained under the state of emergency declared after the putsch.

Film critic Senay Aydemir, who is among the targets of the investigation, believes the move is politically motivated, with the ultimate aim of transforming the arts and culture sector. “I think this process was launched with a view of obtaining political rather than legal results, just as in the case of the academics,” Aydemir told Al-Monitor. “Hundreds of people are being purged from academia, and I believe this will spill over to the realm of arts and culture, starting from the cinema sector.”

The fields of arts, culture and entertainment have been in the government’s crosshairs for years. Istanbul’s iconic Ataturk Cultural Center, for instance, was closed in 2008 with the stated aim of renovation, but almost a decade later, the city remains without its main venue for theater, opera, ballet and concerts. Under the Justice and Development Party (AKP), many actors at odds with government policies have been fired from state theaters, while private ventures have lost funding support from the Ministry of Culture. Others in the entertainment business have seen their contracts with TV stations terminated amid government pressure on the mainstream media and the omnipresent threat of censorship.

The purge Aydemir expects in the cinema sector would proceed through indirect means, aimed at leaving dissidents without work and intimidating others. “There is one difference between the academics and those in the cinema sector: Most signatories do not have regular jobs and earn their living from films, TV series and commercials on a piecework basis. Hence, they will not fear directly losing a job, but coming to a point where one is unable to create or gradually fails to obtain contracts will, no doubt, bear on their lives,” Aydemir said.

He added, “Most of the cinema writers among the signatories are already jobless because of the state of the media, struggling to survive on piecework. I would like to state for my part that our action had no other aim than exercising and defending freedom of expression.”

The controversy over AKP efforts to transform Turkish society along the party’s conservative worldview has focused on two major fields in recent years: education and arts and culture. In a Dec. 28 speech at a ceremony in his palace, President Recep Tayyip Erdogan singled out both fields as priorities in the coming days, fueling the controversy. “We have failed to come to the desired level in two fields only, for which I’m extremely upset. The first is education and the other is arts and culture. I believe we are obliged to put these two fields on the top of our priorities in the coming period,” he said.

What the government has in mind is not a secret. The AKP’s 2015 election platform spoke of an artistic and cultural life that focuses on “national, religious, moral and folkloric values.” And in his Dec. 28 speech, Erdogan described the people he wants to see in the arts and culture realm: “We need intellectuals who are truly free thinking, but who, at the same time, are reconciled with their history and nation, and not intellectuals who look down on and despise their people.”

In Erdogan’s jargon, those who “look down” on the people are usually Western-oriented, secular Turks.

Who the president has in mind as the ideal intellectuals, we don’t know. But the expulsions from the public sector, conducted through legislative decrees, and the judicial probes targeting those in the private sector speak of a far-reaching purge that will undoubtedly also serve to build the arts and culture realm that the government envisions.