The Death of Cinema in Gaza

As Islamist leaders in Gaza maintain a tight grip on the country’s cultural scene, Gazans themselves are divided in their views on cinema, writes Asmaa al-Ghoul. 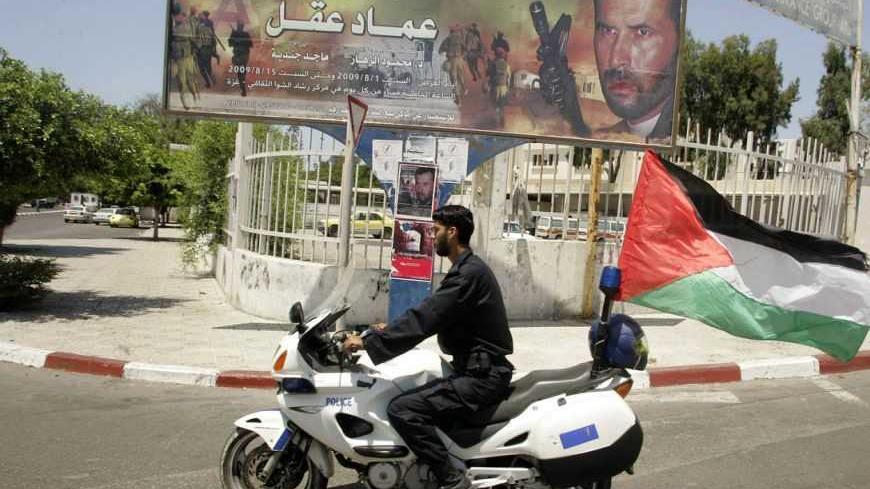 A Hamas policeman rides a motorcycle past a billboard promoting a film in Gaza City, Aug. 3, 2009. - REUTERS/Ismail Zaydah

Heavy slabs of concrete seal the doors of al-Nasr Cinema in Gaza City. Not one aperture exists through which you can see the interior of the building, which has been abandoned for decades. Its towering walls loom over the street, stained black from the old fire. In the 1980s, these walls housed one of the largest cinemas in the Middle East, but now new generations in the Gaza Strip grow old having never been inside a cinema.

Some in Gaza recall the heyday of cinema, when different theaters would compete for customers. Others, though, view that time as a period of decadence before the so-called Islamic awakening.

Producer-director Khalil Almuzain, 49, told Al-Monitor: “When cinema first came to Rafah, it was as if fireworks went off in the neighborhood. There was no television or electricity at that time, and the people of the towns would gather around a single radio and listen. Suddenly the world of cinema was opened to us. To an impoverished boy from a refugee camp, it was an amazing thing. I used to scavenge copper from abandoned British rubbish left behind from the mandate on the border between Rafah and Egypt and sell it at a low price so that I could make enough to buy a ticket to the cinema." That was in the 1970s.

Smiling, he added, “The first film I saw in the cinema was The One Who I Love and The One Who I Want. It transported me to another world, not just me, all of the children from the Shabura refugee camp. It was about two men who loved the same woman. Most of it was filmed in the parks and gardens of Egypt, which were an incredible sight for the people of the refugee camps whose houses were mostly surrounded by sand, concrete and brick.”

Almuzain recalls his father bursting into al-Salam Cinema in Rafah searching for him during the 1978 film Sonia and the Crazy Man. In the darkness his father called for him, yelling, “Khalil! Khalil!” While the audience shouted back at him to stop, Khalil slipped under his seat to hide. Soon the film had been stopped, and Khalil fled out the back door of the cinema fearing the punishment his father had in store for him. His father ended up tying him to a tree and beating him, threatening to divorce his mother if he ever went to the cinema again.

Muhammad Aeraar, director of public and foreign relations at the Ministry of Culture in Gaza, remembers the cinema differently than Almuzain, saying, “When I was young, I would stand around the doors of the cinema in Gaza with my friends, but I never went in. The Israeli occupation was still present then and at the doors of the cinema there was gambling and knife fights; the corruption on the screen was leaking out into society.”

The history of the cinema in Gaza

No records of the history of cinema in Gaza exist except for the occasional anecdote in the memoirs of well-known Palestinian personalities, or what has been passed down by word of mouth. From what could be gathered, most sources agree that the first cinema in the Gaza Strip was established in 1944, when Rashad Shawa obtained a license to open al-Samer Cinema. He bought a white sheet from the Palestinian city of Majdal, equipment from Europe, and transported movies from Egypt by train. The masses would attend the cinema in rapt attention as aircraft flew overhead during World War II.

The renowned actor Farid al-Atrash and his sister Asmahan, the famous singer, visited this cinema, which was packed with people eager to see them. In 1948, the United Nations Relief and Works Agency began showing films aimed at the refugee audience using mobile projectors. They would transport these cinemas-on-wheels to the different camps and show films about personal hygiene and health. It is thought the idea of mobile cinema vans were first introduced to Gaza by the Egyptians, who showed Egyptian army training clips from vans with the words “information convoy” written on side.

After 1953, al-Nasr Cinema in the Gaza Strip expanded to ​​3,000 square meters. The number of cinemas continued to rise, especially in the 1970s, coming to 10 different cinemas in total. These included: al-Nahda, al-Salam, and al-Sabrin in Rafah; al-Huriyya in Khan Younis; al-Nasr, al-Gilaa and al-Amer in Gaza City; and al-Samer Cinema, which was closed in 1969. Most of the films came from Egypt until the Israeli occupation, which started in 1967, thereafter films came from Israel. In the 1970s there was healthy competition between the different theaters, however the 1980s witnessed the escalation of mosque-led opposition against these cinemas. Some of the cinemas were destroyed and others permanently closed.

Almuzain, who's made a film titled Gaza 36mm, said, “Religious incitement against these cinemas started early on with the ascendance of political Islam in its fight against the secularists and leftists whose military presence was waning. Hence, political Islam groups focused on social change in the late 1970s, and showed their strength in the 1980s by burning the cinemas and converting others into club houses and wedding halls. Also, the advent of television reduced people's interest in the cinema at the time."

Decadence and the cinema

Sheikh Abdullah al-Masri, one of the founders of the Salafi Dawah in Gaza, is the head of the Quran and Sunnah Society in Khan Younis in southern Gaza, which used to be the site of al-Huriyya Cinema. Sheikh Masri told Al-Monitor in an interview conducted via telephone that the cinema used to show pornographic films that did not fit with its conservative surroundings. This prompted the religious community to gather the signatures of university professors, doctors, government officials, families and clerics to close the cinema and convert it into the headquarters for the Quran and Sunnah Society.

Sheikh Masri recalls what transpired, saying: "In 1985, we heard that al-Huriyya Cinema was showing a certain film. We gathered in Ahl al-Sunnah Mosque located 150 meters away from the cinema and agreed to storm it. We smashed the equipment and tore the screen, but we did not set fire to anything or injure anyone.”

He explained that they now provide educational services to the area, and underscored that he would not welcome the opening of an Islamic cinema.

Almuzain asked aloud, “What does pornographic even mean? What makes something pornography according to these groups? Does an actress showing her hair qualify as pornography? Who is it that defines what is and what is not pornographic in the cinema? The only downside to the cinema was that our generation started to embrace romanticism. Each one of us believed that he was a hero and that he would rescue his sweetheart; it was a powder-keg of violence and fervor."

Director Nijah Awadallah, 44, believes that Gazan society will never yearn for the return of the days of the cinema because Gazans have so little experience going to the cinema now that there is nothing to miss. She told Al-Monitor: “Families and friends do not go and meet in front of the ticket office every week. They never step into the darkness of the theater and watch the actors and actresses strut across the big screen.”

As for the current Ministry of Culture’s approach towards cinema, Aeraar stated that, “In the Gazan mindset, the word ‘cinema’ is associated with something bad. It is considered a violation of the community’s traditions and corrosive to its values. It is viewed as a waste of money which only inspires bad behavior in children and teenagers. Thus Gazan citizens do not miss the cinema nor do they sense its absence, especially considering that it is a society that often lacks essential resources for day-to-day living.”

Awadallah, whose filmmaking credits include The Ember Holder and Brides, believes that religious groups are taking advantage of the community’s lack of exposure to cinema when they promote the idea that film leads to decadence and moral corruption. She went on to say, “How can we have cinema in Gaza when our films are subjected to government censorship and sections cut out, in the event that they are allowed to be shown in the first place?”

When Al-Monitor asked Aeraar during an interview in his office at the Ministry of Culture if he had ever been to the cinema to see a film, he said with a smile that he had not, adding: “The ministry has signed contracts to implement a project in coordination with Iran to establish cinemas in Gaza. A delegation from the Ministry of Culture will follow up on this agreement during the week. We are interested in developing responsible cinema and operetta by supporting the production of films, and encouraging balanced and proper art.”

Films of the world

According to the Palestinian Central Bureau of Statistics, the Gaza Strip is one of the most densely populated cities in the world, with 4,505 persons per square kilometer in 2012. So how do the people here fill the gap left by cinema and group entertainment?

Hani Dawoud, the owner of the movie store named Master Movie told Al-Monitor that Gazans make up for the lack of cinema by downloading movies produced abroad from websites or by purchasing bootleg copies. He said that his store sells films from the Arab and Western worlds for all generations, some of which are still showing in American theaters. He added that this is the only safe way to get entertainment in Gaza because you can watch the film at home and not in a public place susceptible to being shut down.

Dawoud does not deny that selling these movies is illegal. He sells them for $2 per copy and downloads them from the Internet; some he downloads for free, whereas for others he pays a fee. He went on to say, “Who will supply Gaza with original copies? And even if that did happen, who in Gaza would pay $20 for a copy? Who is going to file suit against video shops and the youth of Gaza for watching pirated copies? Even if lawsuits were filed, they would spend more money on legal fees than what they would receive back in profits from selling original copies in Gaza.”

A few months after the establishment of the PA, al-Nasr Cinema opened its doors once again. It started showing movies as part of a government initiative at the time, but it was quickly shut down. During what came to be known as the events of Palestine Mosque of 1996, the cinema went up in flames after clashes between Hamas activists and security personnel from the PA.