A researcher and an elementary school teacher have quietly been on hunger strike for 70 days now to protest the post-coup purges that led to their dismissals. 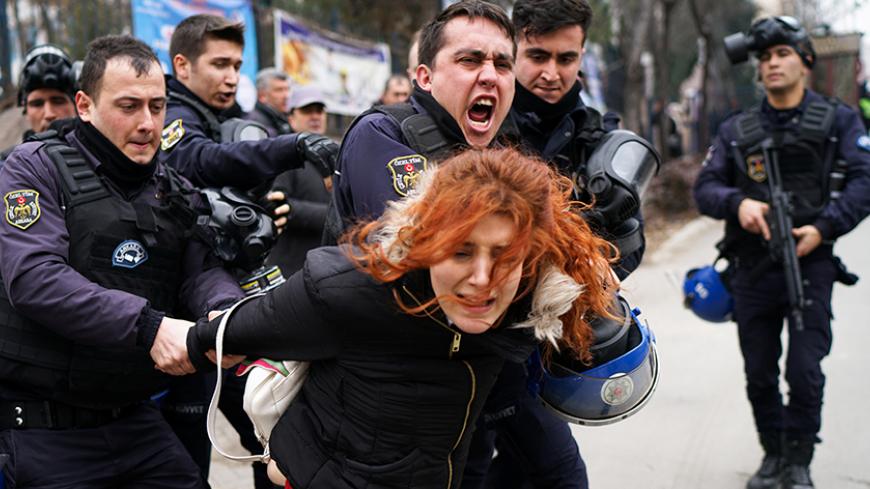 Riot police detain a demonstrator during a protest against the dismissal of academics from universities following a post-coup emergency decree, outside the Cebeci campus of Ankara University in Ankara, Turkey, Feb. 10, 2017. - REUTERS/Umit Bektas

Nuriye Gulmen, a research assistant at Selcuk University in Konya, was first suspended from duty and then removed from her position during the state of emergency after the attempted coup in July. She started a solo protest to get her job back on Nov. 9 on Ankara’s Yuksel Street and soon was joined by Semih Ozakca, who had been dismissed from his position in an elementary school in Mardin's Mazidagi district, along with his wife.

On March 9, the protest escalated into a hunger strike. Gulmen and Ozakca have been detained many times by the police, but they have carried on. This period, after 60 days of malnutrition, is the most critical stage in most hunger strikes as the protesters are at risk of developing problems like Wernicke-Korsakoff syndrome, a combination of neurological disorders caused by thiamine (Vitamin B1) deficiency.

Psychiatrist Semih Dikkatli told Al-Monitor, “The root cause of Wernicke-Korsakoff syndrome is malnutrition. As the protesters take in only sugar and water, the first victims of these types of protests are the brain cells. It causes neurological and cognitive problems such as attention deficits, losses of concentration and memory. Immediate treatment is vital.”

Despite Gulmen and Ozakca’s ongoing protest, the Turkish government has yet to restore their jobs and legal rights. The Turkish Constitutional Court has referred individual appeals to administrative courts.

Opposition Republican People’s Party (CHP) deputy Baris Yarkadas told Al-Monitor, “The government was not even aware of this hunger strike until CHP chair Kemal Kilicdaroglu informed them. The government is too busy establishing one-party rule in Turkey.”

Yarkadas added, “It is hard to imagine a government is not even aware of an ongoing protest in its capital, but this is where Turkey is right now.” After the CHP spoke up, an ambulance was dispatched to Yuksel Street, but the protesters refused medical treatment. The police detain people who come from all over the country to express solidarity with Gulmen and Ozakca.

Almost 20,000 Turkish academics have been dismissed under the state of emergency after the July 15 attempted coup, in a crackdown on the political opposition. According to Yarkadas, almost 110,000 public servants who oppose the government’s ideology have been dismissed from their positions.

Groups of artists, writers, academics and students have called for solidarity with Gulmen and Ozakca. Several solidarity protests are being carried out in various countries such as Canada, the United States, France and Germany. Renowned artist Onur Akin told Al-Monitor, “These unfair and unjust dismissals of academics are not acceptable by any means. We will continue to show solidarity with Gulmen and Ozakca. All dismissed academics in Turkey should be given their rights and jobs back immediately and the rule of law should be restored. We will not allow the government to repress the public.”

Gulmen added, “It is our incontestable right to reclaim our jobs and rights. The protest that we started to draw attention to our conditions will continue in the form of a hunger strike. We will not end the hunger strike until the authorities fulfill our expectations. There is nationwide support for the protest just the two of us sparked. I have experienced health problems, but I will not yield to the darkness and oppression. I have faith that I will regain my rights and job. I am incredibly happy for such support rallying around us.”

Gulmen and Ozakca continue their sit-in in front of the Human Rights Monument in Ankara, with human rights advocates rallying around them.