How one woman is standing up to Turkey’s purges

A Turkish academic, expelled after the July 15 coup attempt, has kept up a solo protest in downtown Ankara since early November, despite frequent detentions and mistreatment by the police. 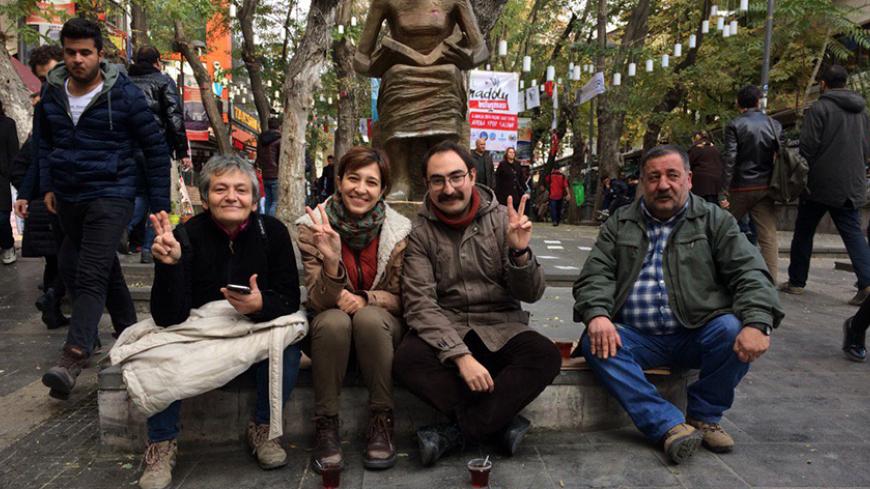 The Human Rights Monument — a sculpture depicting a woman reading the Universal Declaration of Human Rights — is a well-known hallmark in a bustling pedestrian area in the heart of Ankara. Over the past month, a second fixture has appeared on the site: a woman with a banner. Despite 17 detentions, often by heavy-handed police, Nuriye Gulmen — one of hundreds of academics suspended from office after the July 15 attempted coup — keeps returning to the site to demand her job back.

Her solo protest since Nov. 9 has made Gulmen a symbolic figure in Turkey’s state of emergency since the putsch, which has seen a ferocious crackdown on followers of Fethullah Gulen — the accused mastermind of the coup — and other government opponents. At a time when street demonstrations have become rare and are quickly clamped down by police, the young woman has stood out with unbending courage and will.

Al-Monitor went to the Human Rights Monument several times to speak to Gulmen, witnessing her detention each time. A few days ago, however, social media users reported an “extraordinary” development. “Nuriye Gulmen was not taken into custody today,” they said, prompting this reporter to rush to the monument again. Gulmen was there, asking passersby to sign a petition calling on authorities to give her back her job at Selcuk University in Konya, some 260 kilometers (161 miles) south of Ankara.

Gulmen studied comparative literature, and after obtaining a post-graduate degree, she embarked on an academic career. Because of her dissident attitude, administrative probes became part of her life, she told Al-Monitor. “I was working under a constant threat of expulsion. They would even write a [disciplinary] report on the grounds I was singing in the corridors,” she said. In 2015, the university refused to renew Gulmen’s contract, but she was back to work on Sept. 30 after winning a court case against her employers.

The same day, however, she was notified of a fresh investigation and received a lengthy questionnaire to answer. By that time, the purge of suspected Gulenists from public service was in full swing, and most questions on the list pertained to the putsch and the Gulen community, which Ankara now calls the Fethullah Gulen Terror Organization (FETO). “There were questions like, ‘Have you ever sympathized with the community?’ ‘Who is behind the July 15 coup attempt?’ ‘Have you been involved in any way in the events? Do you regret it?’ I replied the probe was not based on any factual suspicion and that the questions were forcing individuals to reveal their thoughts,” Gulmen said. “I said I was a socialist and that the measures against FETO should not aim at purging leftist democrats. Back to work on Monday after the weekend, I was told I had been suspended.”

Gulmen decided to start a protest in Ankara, where all government agencies are located. On the morning of Nov. 9, she arrived at the Human Rights Monument with two banners that read, “I was suspended, I want my job back” and “The state of emergency must be lifted, arbitrary expulsions must end.” She was just starting to make a press statement when police closed in and took her into custody. She was booked for breaching the law on public demonstrations and then released.

The following day, Gulmen returned to the same venue with the same banners. Again, she was detained. The police this time booked her for breaching the law on misdemeanors and slapped her with a fine. As of Nov. 29, when the interview took place, Gulmen had been detained 17 times. Describing her protest routine, she said, “Because I generally refuse to leave the spot, five or six police officers drag me away, twisting my arms. I’ve developed ecchymosis on my knees and other parts of my body. I’ve been subjected to insults in the police vehicle. So far, I’ve been booked twice for breaching the law on public demonstrations and fined 10 times for violating the law on misdemeanors.”

Gulmen is not alone in her struggle, often surrounded by a crowd of passersby and other supporters. “They call it a ‘solo protest’ but that’s not the case. Many people come over to express solidarity, many people support me. Some would take pictures of me and post them on social media to make my voice heard, and some would sit in with me,” she said. “Once my coat was torn while the police were detaining me, and people here bought me a new one. Shopkeepers are bringing me tea. It’s not a one-man protest. There are many who support and reinforce it with their solidarity.”

Gulmen’s supporters are not immune to sanctions either. One of them, high school student Sila Yalcin, was not only detained but also expelled from the public school she attended. Another high-profile supporter is former political prisoner Veli Sacilik, who is remembered for having an arm torn off by a digger, which the security forces used to demolish walls during a crackdown on hunger strikers across Turkish prisons in 2000. The severed arm was left in the rubble and later retrieved from the mouth of a stray dog. A sociologist who worked in social services, Sacilik is among tens of thousands of public servants expelled after the putsch.

While Al-Monitor spoke to Gulmen, another victim of the purges, teacher Semih Ozakca, was collecting signatures nearby for his own petition to be reinstated. He had come all the way from the southeastern city of Mardin, more than 1,000 kilometers (621 miles) away, after deciding to team up with Gulmen. “I will struggle for my job and bread because I believe those measures are unjust and unfair,” Ozakca told Al-Monitor, adding he had been detained five times so far. “I was maltreated, and I still have various scars and pains,” he said.

Gulmen has inspired others to follow suit. Teacher Acun Karadag, for instance, has launched daily sit-ins outside the Ankara high school from which he was expelled. “I’ve been keeping up the protest since Nov. 14,” he told Al-Monitor. “I’ve been detained 11 times so far, and the police are punishing also those who support me.”

Winter has already descended on Ankara, with occasional snowfalls. How will the protesters go on, now that the threat of detention is coupled with freezing cold? “I’m not giving up until I have my job back,” Gulmen replied. “I’ll go on no matter what.”