Turkish officials have admitted that innocent people could have been victimized in the massive purges since the July 15 coup attempt. 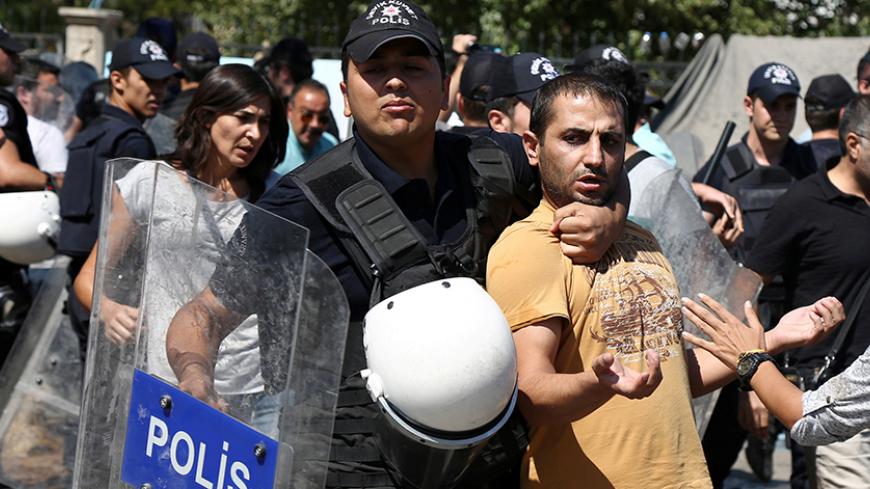 Riot police detain a demonstrator during a protest against the suspension of teachers from classrooms over alleged links with Kurdish militants, in the southeastern city of Diyarbakir, Turkey, Sept. 9, 2016. - REUTERS/Sertac Kayar

Close to 51,000 Turks were expelled from public service in the wake of the July 15 coup attempt for alleged links — direct or indirect — with Fethullah Gulen’s congregation, which Ankara holds responsible for the putsch and calls the Fethullah Gulen Terror Organization (FETO). The Sept. 1 purge — carried out through legislative decrees, a tool made available by the state of emergency — included administrators and employees from various institutions, most prominently in the military, in the police and in the education sector. Then, last week, 11,285 teachers were suspended in the mainly Kurdish southeast for activities “supportive” of the Kurdistan Workers Party, a designated terrorist organization, and its extensions. The figure is expected to reach 14,000 in the coming days.

The hunt for FETO supporters in the public sector is also continuing. According to the daily Sabah, another 40,000 people have been put in a “gray” category, risking expulsion if their suspected bonds with the group are “clearly established.”

The names of the people who were dismissed were published in the Official Gazette, exposing them for all to see and crushing their chances of employment in the private sector. Those who asked for retirement saw their applications rejected.

So what’s next for the dismissed? How will they make a living? What can be done to resolve a problem that affects hundreds of thousands when families are counted in? What remedy can be found for thousands of traumatized people, expelled without any trials and convictions?

In a Sept. 2 interview with Bloomberg HT television, Prime Minister Binali Yildirim admitted that a “new problem area” had emerged in the country, signaling that some expulsion decisions might be reversed. “True, those people are left jobless now. We’ll be working on measures to prevent problems that are likely to emerge in the future,” he said. “Though I cannot share the details now, we’ll find a solution to that as well. But for whom? Those who have stood trial and been convicted will be excluded. For the others, however, we’ll outline some measures. That’s part of our duties.”

The prime minister’s statement raised hope for thousands who were lumped together with others due to malicious informers at the workplace, flawed information or actions that cannot be legally considered as crimes.

In the same interview, Yildirim said, “Our colleagues are splitting hairs, and the ministries are making the utmost effort so that the innocents are not lumped together with the others. I’m being very meticulous myself.”

Yet several days later, President Recep Tayyip Erdogan declared, “The horse’s traces had mixed with the dog’s traces” — a Turkish phrase that describes a serious confusion that makes it hard to distinguish between good and bad. Speaking to reporters accompanying him on a flight back from the G-20 summit in China, Erdogan grumbled that irrelevant people were being vilified, especially by members of the media. “When I have time, I watch the TVs sometimes. They are making comments about people who have nothing to do with this affair. But those people are being stigmatized. Such attitudes should be avoided,” he said.

The main opposition Republican People’s Party (CHP), which stood by the government in the bungled putsch, has raised similar objections from the very start of the purges and detentions. In a report in early September, the CHP said public servants known as leftists or secularists had been branded as Gulenists and removed from office. The report provided concrete examples with names and institutions.

In remarks to Al-Monitor, CHP parliamentary whip Levent Gok said some sought to take advantage of the purge to get rid of left-wingers, stigmatizing them as FETO associates. The CHP, he stressed, is preparing to petition the Constitutional Court to cancel provisions in legislative decrees that breach the scope of emergency rule.

Another CHP deputy, human rights lawyer Sezgin Tanrikulu, was confident that the expelled employees would return to their jobs, but said the legal process might drag on for years. “The legislative decrees violate the constitution,” he told Al-Monitor, stressing that the Constitutional Court had set precedents in the 1990s by striking down legislative-decree provisions that breached the scope of emergency rule. “Legislative decrees cannot eradicate the right to public service, which is a constitutional right. Public servants cannot be stripped of this right without any conviction,” he said. “If the legislative decrees are canceled upon the CHP’s petition, the ground for the expulsions will no longer exist.”

Tanrikulu recalled that teachers and university scholars expelled after the 1980 coup had all returned to their jobs and recovered their retirement rights in later years. “The same will happen with those who are being dismissed today, but this, of course, will take a long time,” he said.

And what is the government doing to rectify erroneous expulsions?

Hurriyet reported Sept. 7 that Yildirim had ordered a review of the dismissals, excluding those who assumed a concrete role in the coup attempt and have direct links with FETO. And for those deemed to be “sympathizers,” the government is considering compensation and restoration of legal rights such as retirement, but without any chance of returning to public service, the report said.

Speaking after a Cabinet meeting last week, Deputy Prime Minister Nurettin Canikli signaled that legislative decrees would be used again for any reversal decisions. “If any [expulsions] turn out to be erroneous, we’ll reinstate those individuals via the same method we used to dismiss them,” he said, meaning the names of the returnees would be also published in the Official Gazette.

CHP lawmaker Aytun Ciray, a physician by profession, warned that the mass purges could inflict lasting social traumas. “When the horse’s traces get mixed with the dog’s traces, the impact spreads to hundreds of thousands of people, like the waves a thrown stone makes in the water,” he told Al-Monitor. “This will lead to mistrust in the state. The coup plotters aimed to polarize society and spark a civil war if possible. Such overblown, reckless actions, or throwing the baby out with the bathwater, will only serve the purpose of the putschists.”