Anyone who dares protest Erdogan is branded a dangerous terrorist and subjected to cruel and unusual punishment, even elderly mothers. 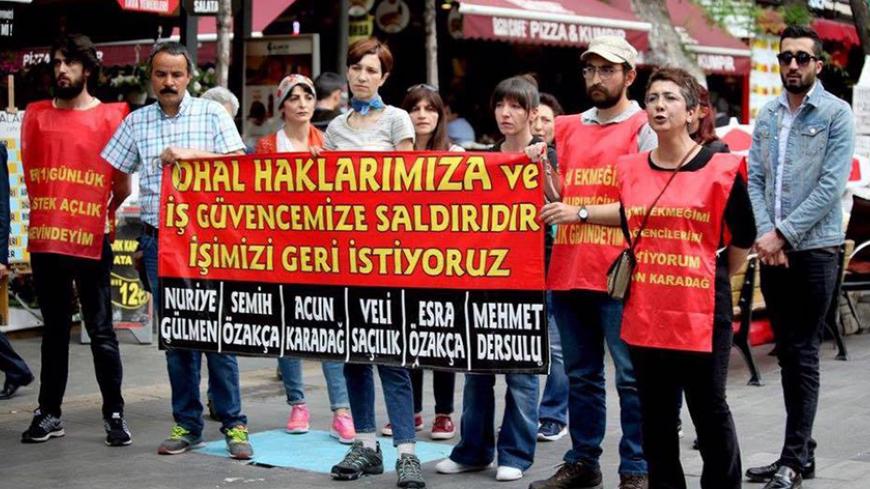 On May 22, Turkish social media was rocked by a picture of a woman being kicked and dragged on the street by police officers. The woman was the mother of scholar Veli Sacilik, who was standing in solidarity with Nuriye Gulmen and Semih Ozakca, teachers who are on a hunger strike.

Sacilik, just like Gulmen and Ozakca, was dismissed from his government position without any explanation or due process after the July 15 coup attempt. Indeed, currently there are more than 100,000 government employees who were dismissed. Amnesty International succinctly described the process as “professional annihilation.”

Gulmen started a sit-in in front of a statue in the heart of Ankara. The sit-in has now turned into the Yuksel Resistance (for its location on Yuksel Street, which is closed to car traffic) with a heavy police presence and blocked-off streets. The statue, which was erected in the 1990s, is of a woman sitting and reading a human rights declaration. Ankara-based journalist Unsal Unlu said that over the years this statue has been exposed to the highest amount of gas due to protests.

Gulmen started sitting in front of this monument all alone on Nov. 9, 2016, with a sign that read “I want my job back.” She was taken into custody almost every day for months along with Ozakca, Sacilik and a few others.

Out of desperation, Ozakca and Gulmen announced on March 11 they would be starting a hunger strike — with liquids and Vitamin B1 medication allowed — until they got their jobs back.

On May 21 around 1 a.m., they were taken into custody from their homes by special operations police.

Sacilik told Al-Monitor, “I was standing to protest Ozakca and Gulmen’s arrests, and I always ask my mom not to come or to stay far when the police charge. But once they started spraying gas at us in the police bus, she got upset and screamed my name.” That is when they charged at Kezban Sacilik, who is almost 70 years old. The videos show her being pushed down, dragged and kicked by officers who are younger than her son. Sacilik told Al-Monitor, “This wasn’t the first time. My mom protested about my arm being severed by a bulldozer 17 years ago and she was beaten by the police then. Since then she says, ‘I will not wear a skirt when I go out of the house.’”

Indeed, a quick look at the peaceful protesters, including lawmakers, presents a picture without any skirts. On May 19, Sacilik, Gulmen and Ozakca’s mothers were brutally attacked and taken into custody at a sit-in at Yuksel Street. They all had pants and tennis shoes on, anticipating this could happen.

One seasoned female activist told Al-Monitor, “The police are attacking women by dragging them by their hair, kicking them in their crotch, pushing on their breasts. These are women who are simply here to say ‘hi,’ to say ‘we support you’ or to give a flower. The government is systematically against women, voices of women and women who are out in the public domain. Perhaps it is beauty that bothers them. I mean look at their supposed legislation destroying all greenery, turning children’s parks into parking lots for cars, cutting down centuries’ old olive trees, and erasing the beautiful decorations and colors on historic mosques with acid. Women, flowers, laughter, beauty and peace are their nemesis. That must be why they are ordering these young police officers upon us.”

Sacilik concurred. He added that Gulmen, as a female, was the recipient of the worst sort of cruelty. In all of the arrest videos, we see the police targeting Gulmen first and worst.

President Recep Tayyip Erdogan’s battle with mothers dates back to 2006 when he told a farmer who was complaining about insufficient government assistance, “Get lost, take your mother and get lost.” This hatred peaked during the 2013 Gezi Park protests. In the early stages, the government asked the mothers to call their sons and daughters back home. When the mothers came out to stand in solidarity with their kids, they were attacked.

Berkin Elvan, a 15-year-old victim of police brutality during the Gezi protests who became a symbol of resistance upon his death, was declared a terrorist by Erdogan in March 2014. Erdogan in the same speech had the crowds boo Elvan’s grieving mother. She and other Gezi families joined in Gulmen’s and Ozakca’s quest for justice as well. It was not only Gezi families. Families of victims of the 2014 Soma mine explosion, who still have not received any sort of compensation for their dead husbands or sons, showed their solidarity along with several others around the country.

When Gulmen and Ozakca were arrested this week, only four newspapers in Turkey had the courage to publish the news. The prosecutors are seeking 20-year prison terms.

As Ozakca’s wife and mother joined the pair in their hunger strike, they were taken into custody and later released.

Gulmen’s mother said, “Before they arrested my daughter, we learned that the police officers visited her uncles and told them to convince my daughter to stop her resistance or she will be put in prison. When the police broke our door, I pleaded with them about her condition. I told them they [Ozakca and Gulmen] are already struggling, please leave them in our care, they will die in prison. The police replied, ‘We are taking them to keep them alive.’” On May 24, Sacilik told Al-Monitor, “We fear the authorities will wait until they are unconscious then start force-feeding them. We also anticipate that they will soon arrest us as well.”

Briefly before the arrest was finalized, Gulmen told her friends, “We are most likely to be arrested because it looks like the order is from the top.” The questions posed to the pair by the authorities demonstrate assumption of guilt. For example, “Are you trying to spread your operations to generate Gezi-like protests?” “What is the real purpose of these presumably innocent rights-seeking protests?” “What kind of [financial] benefits were offered to you to carry out this hunger strike?”

On May 25, Interior Minister Suleyman Soylu made a rather angry public announcement blaming the media for sharing “cute photos” of Gulmen and Ozakca. He said they were terrorists, therefore they could not be trusted in the education profession. How they were able to secure a government job as terrorists was not explained. Soylu presented a mind-boggling argument that the pair was not on a real hunger strike. “They go to their protest place at 9 a.m., and they eat and drink at night.” Gulmen and Ozakca, taken into custody on the 76th day of their hunger strike, have lost dozens of pounds and were too weak to walk without assistance.

Erdogan and his men fear opposition of all sorts and act in unimaginable ways to stay in power. On the one hand, the government took more than 10 months to revoke Fethullah Gulen’s special passport and is releasing prominent members of the Gulen movement from jail one by one for reasons such as varicose veins or sleep apnea. On the other hand, hundreds of thousands of families are forced into destitution while the public is told to believe all people anti-Erdogan, including mothers, are terrorists.