The systematic sexual harassment of female Turkish protesters in custody is used as a weapon to deter them and marginalize the protest movement. 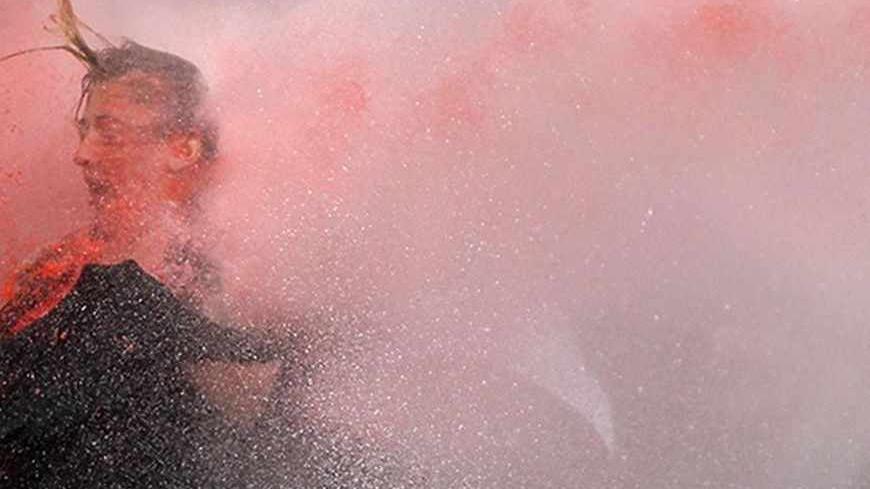 A woman is attacked by water cannon during protests in Kizilay square in central Ankara, Turkey on June 16, 2013. - REUTERS/Dado Ruvic

On Sept. 11, a story broke about a female student taken into custody at one of the most prestigious universities of Turkey, Middle East Technical University (METU). Ezgi Ozen and her friends were protesting a government road project that may destroy 3,000 trees on the METU campus and nearby neighborhoods. Another protester was able to shoot a video of Ozen being handcuffed and escorted to police vehicles. The video shows an officer yelling, “If she resists, her arm will be broken.” Unarmed and relatively small, could Ozen really have “resisted” the police?

After she was released, Ozen announced that 200 police officers verbally and sexually harassed her while in custody. She said, “They all took turns touching me.” During the Gezi protests, we read several stories of sexual, physical and verbal harassment of women, so much so that the women of Gezi had to organize under the banner “No to Sexual Harassment in Custody” ("Direniste Polis Tacizine Hayir"). Given that Turkish culture shuns the victim of sexual harassment, and the lack of hope among Turks for any kind of compensation from the police for abuses, it is safe to assume the number of incidents are higher than reported.

As other Al-Monitor contributors have explained, Turkey is witnessing a second wave of Gezi protests. METU is one of those sore spots. Students there failed to greet Turkish Prime Minister Recep Tayyip Erdogan in an affectionate manner during his last visit in December 2012. Indeed, METU hosted one of the first rather unpleasant anti-Erdogan protests. Currently, 45 students are under investigation, with prosecutors asking for up to six years of imprisonment. In addition, nine students are facing charges for possible terror-group membership. Several mainstream media outlets refer to METU as a “hotbed of left-wing organizations,” and this is no compliment in Turkey.

With this second wave of protests, many pundits have observed that while the nature and extent of police suppression is different for each neighborhood, it has increased overall since May. Intriguingly, during the first days of the protests, Erdogan admitted that the police had used excessive force, and spoke of a possible investigation into those incidents, but the violence has continued to climb ever since. With six dead — including one police officer — since the end of May 2013, the Turkish government’s perspective is hard to decode. For example, on Sept. 13, Minister for EU Affairs and Chief Negotiator Egemen Bagis commented, “The deaths of Gezi are trivial incidents compared to Syria, right?” At the end of June, Erdogan said, “Our police have passed the test of democracy with flying colors during Gezi protests. Our police have written a legend, acting within the limits of law.” However, the increasing number of police-brutality videos and allegations from victims of abuse in custody force us to question Erdogan’s statement.

Engineer and Istanbul businessman Tayfun Erkeskin, who has been observing the Gezi protests since the first days, defined the nature of the Gezi protests as a “feminine movement” to Al-Monitor. Erkeskin added, “The women of the movement were strong, brave, caring, well organized, determined and hard working. They were active in social media; their statements made the headlines.”

Indeed, it is worth remembering that Turkish women are no strangers to protesting the state. They protested the headscarf ban, particularly at colleges in the 1990s and early 2000s. Having participated in a sit-in for this cause, I recall the Turkish police as being angry overall, but kind and gentle with the women. I could never forget the policeman who ran to get me a strong cup of coffee when he realized my asthma was kicking in at an METU sit-in during the late 1990s.

During the Gezi protests, women were the organizers of food, drinks, entertainment and medicine. They were the mothers who rushed to their children’s sides when the government told the parents to “get your children off the streets” at Gezi Park. They were at Gezi with their books, guitars, high heels, headscarves and sometimes with their children. Most importantly, they were actively involved in the protests all around the country in high numbers. When you look at the Gezi Park movement, the most prominent icons are women. Yet, when you look at the police force, they were overwhelmingly men. Female police officers numbered few among them.

Since June, I have had the opportunity to speak with several women of the Gezi Park movement from different parts of Turkey. All of them have experienced police brutality, and most of them have also experienced some sort of sexual and verbal harassment prior to and during their detention. Considering the fact that women are always asked to stay at home "where they belong" in Turkey, the mere presence of women on the streets is crucial. In 2010, Turkish female employment levels were at about 25%, one of the lowest rates in the world. For most of these women, the Gezi protests were their first political act, and their first experience ever with being in custody or in direct confrontation with a police officer.

Beyza Metin, a brave young engineer who was taken into custody in connection with the Taksim Solidarity Platform (an umbrella organization which brought together several NGOs in support of the Gezi Protests), told Al-Monitor, “Women from all walks of life were in the forefront of the protests.” Metin emphasized a crucial observation: They have been verbally abused by female police officers, as well.

Why do the police systematically harass women in custody? Why would the police strip-search or even conduct manual body-cavity searches of peaceful protesters? Why would they threaten many women in custody with rape? Some pundits argue these practices are used systematically as a punishment. Yet the systematic nature and extent of this verbal, physical and sexual abuse goes beyond “teaching protesters a lesson for their behavior,” so we must question whether it also aims to intimidate and deter women altogether from participating in the protests.

One cannot help but observe the correlation, if not causation, between increased police brutality and the mounting anger in Erdogan’s rhetoric against the movement. The harsher Erdogan speaks about the protests, the worse the police brutality becomes. Did we not all hear several times that protesters are rioters, looters and rodents of society? But it is rather difficult to convince the public that this is the case when you see women holding toddlers and babies, distributing sandwiches and singing songs of peace and reconciliation. When children, women and well-respected figures of society all stand together, it sends the message this is not a movement of the marginal. More people feel confident to come out and join the peaceful protest. Their presence legitimizes the movement.

Many cannot help but ponder Erdogan’s words: “Women are women, men are men; is it possible for them to be equal?” Gender equality is not a term the patriarchal Turkish state enjoys, hence, as usual, women have paid extra costs to join the protests. But this time, the movement needs women to remain legitimate.