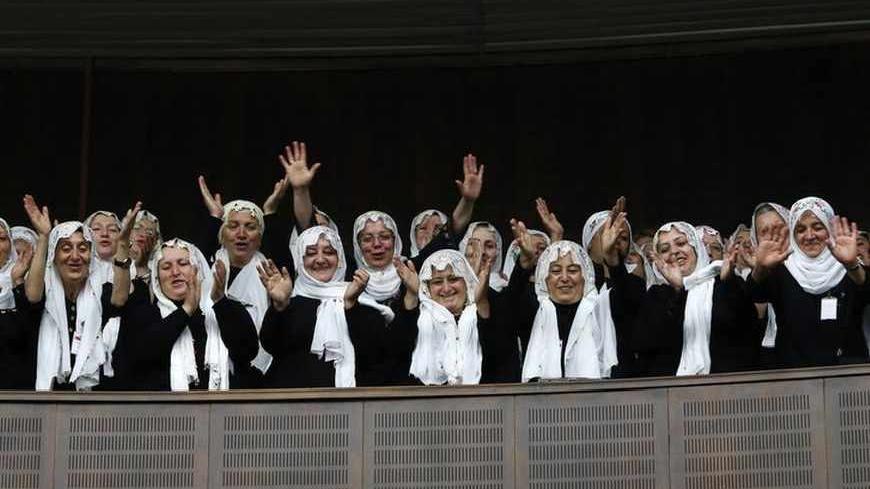 Supporters of Turkey's Prime Minister Tayyip Erdogan cheer as he addresses parliament from his ruling AK Party (AKP) during a meeting at the Turkish parliament in Ankara, June 25, 2013. - REUTERS/Umit Bektas

But the prompt reply to Watson’s tweet came from Ismail Cesur, one of Turkish Prime Minister Recep Tayyip Erdogan’s advisors: “Sorry Ivan we do not consider vandals and provocateurs as 'peaceful protesters.' Try to watch objectively and see the difference.”

The resentment towards Gezi protests or any domestic dissent is piping hot among the Turkish policy elite. Erdogan’s view of the Gezi protests oscillates between treachery and vandalism. Many pundits agree that the AK Party will dominate the next elections, so why is Erdogan still so scared of domestic protests?

A reasonable answer for Erdogan’s fear is the growth of a robust opposition. A possible panacea for this fear would be to suborn some segments of the opposition and reach a compromise to guarantee re-election. However, a sound analysis of Erdogan’s speeches indicates that Erdogan does not take the opposition’s wishes seriously. He is not worried about getting their votes. Erdogan’s biggest fear is the disapproval of the “Islamist” sections of Turkey (we can refer to them as “concerned” Islamists). In the last decade, with some help from the AK Party, the number of pious Muslims has increased. The younger voters are more sensitive to Islamic values. The AK Party has opened the public space to several religious groups which have agreed not to be involved in politics.

Throughout the Gezi protests, Erdogan’s major worry was to consolidate this base; his concern was to appear soft and not-in-control. Erdogan had to convey the message that the AK Party is the only option “Islamists” have in Turkey. If the AK Party were not in charge, all pious Muslims would suffer on different levels.

Indeed, just like the protestors, the “other” Islamists are also aware that their freedoms are not guaranteed through constitutional rights, and thereby they are at the whim of the political elites. For instance, this week the parliament was considering the right to wear a headscarf for an MP. Hence, the Islamists have valid reasons for to be concerned.

It's best to explain this tedious process through some landmark events.

Gezi was not the first time Erdogan faced public disapproval. On the first post-Gezi TV interview, Erdogan expressed his resentment for the treatment he received when he went to the opening of a stadium for Galatasaray, a prominent Istanbul soccer team. The fans booed Erdogan when he entered the stadium, the TV channels — in line with being so alertly pro-government — turned down the volume of the protesters. Although this happened in January 2011, Erdogan still refers to those soccer fans as “ungrateful people, or members of illegal organizations.” Erdogan’s reactions signal he views the “opposing” groups as lost causes.

During the Gezi protests, Erdogan initiated a series of "Respect the National Will Rallies." He repeated almost the same lines in each of the five mass rallies. Each speech had louder “Allah-u Akbar!” (God is Great!) chants. There were two incidents, neither with adequate proof, which were used to rally the “concerned” Islamists. Both of these incidents involved “attacking sacred Islamic values and honor.”

The first line was, “They entered into our mosques with shoes and drank beer inside.” It was a reference to Gezi protesters seeking refuge in a mosque. Even though the mosque’s imam stated he did not see any alcohol, Erdogan was determined to relay the message that “vandals of Gezi park desecrated our mosques.”

The other line was, “They dragged my hijabi sisters on the ground.” All listening to him knew he was referring to the event of June 1, when a 25-year-old hijabi (a woman dressed in accordance with Islamic guidelines) along with her baby, was reportedly attacked by a group of people who were said to be part of Gezi Park protesters. Graphic details of the event, which took place in Kabatas, the center of Istanbul, poured in first through the twitter accounts of prominent hijabi journalists.

As a woman and a mother I felt a deep fear and humiliation along with sorrow reading the news and the victim’s interview. Each time Erdogan brought up the attack, more rumors and fear spread about abuses against hijabis. Yet, it has been about 75 days since the event took place and no suspects have been brought to justice. Every day, several people inquire with the journalists who broke the horrid news on twitter. They remain silent.

Umut Oran, vice president of the main opposition party, CHP (Republican Peoples Party) is the only one who has been following up on this event to bring the criminals to justice. Oran told Al-Monitor on Aug. 14, “The police and Internal Ministry have no record of the event; no camera recordings are available; there are no suspects; there is a complaint at the Istanbul chief public prosecutor’s office.”

The Turkish public is confused: When will justice be served? Yet, this event, the fear that “the other Turks” — call them whatever you please, white Turks, seculars, marginals, chapulcus, terrorists — would attack pious Muslim women in humiliating ways has been carved into the memories of the AK Party’s base. This religion-flavored rhetoric has become the turning point by mobilizing the “most religious” groups around the AK Party flag in the name of “honor.”

Hence, contrary to popular belief, Gezi did not scare Erdogan. What Erdogan has to fear most is a rift within the AK Party which results in an alternative, more conservative movement: one that can talk about riba (charging and collecting interest), a more religious way of life from hijab styles to polygamy and other Islamic requirements the AK Party has diligently ignored. So far, Erdogan has managed to co-opt the more conservative political movements, such as Numan Kurtulmus’ People’s Voice Party (HSP), into AK Party. Kurtulmus is now the Vice President of the AK Party. Erdogan has been accommodating “concerned” Islamists on many levels.

Erdogan’s biggest concern is not to please or accommodate the guitar-carrying college student who would never show up to vote, or would ever vote for the AK Party anyhow.

No, Erdogan’s biggest fear are those quietly watching from home, all those “pious,” “observant,” “Islamist” voters who are not necessarily happy with the not-sufficiently Islamic AK Party policies and nepotism of the ruling elite.

Erdogan’s post-Gezi behavior could help the future protesters: Erdogan fears the “other” Islamists the most. Any opposition that ignores them will fail.