'Naming' and 'Shaming' In Turkish Politics

Naming and shaming policies that have intensified after the Gezi Park protests hurt Turkey’s democratization. 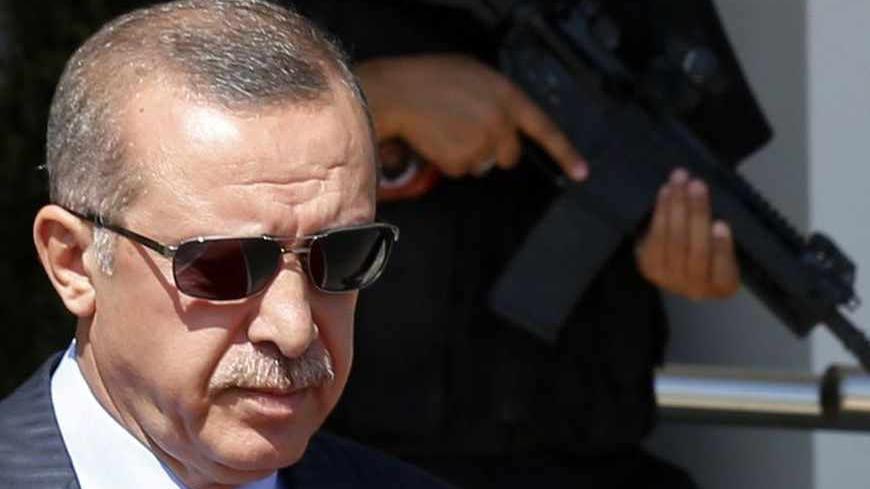 Turkey's Prime Minister Recep Tayyip Erdogan walks to his plane as he leaves for Turkmenistan, at Esenboga Airport in Ankara, Aug. 15, 2013. - REUTERS/Umit Bektas

On Aug. 24, Turkish Prime Minister Recep Tayyip Erdogan spoke in his hometown of Rize. The highlight of his speech was the US condemnation of Erdogan’s remarks about Israel being behind the coup in Egypt. Erdogan asked why would the United States respond to his words about Israel? He added that those who are silent about the interventions from thousands of miles away, those who are drinking the blood and oil resources of the Middle East, cannot be critical of Turkish humanitarian efforts in the region.

This passionate way of public speaking is accepted as Erdogan’s signature style. It is one of the features that make him charismatic and powerful in Turkey. He knows the public reacts positively to his style. An effective public speaker, Erdogan has a way with words. His eloquent style is informative when he is going public with a new idea, sharing information on accomplishments, polls and other substantive arguments. One rarely dozes off listening to Erdogan. However, there is another side: His anger generates name-calling and ad hominem attacks against his political opponents. The political opponents can vary; lately he was quoted referring to the Nobel Prize as "You Nobel," later to "You UN, what is your function?"

The name-calling is not restricted to Erdogan. Indeed, the region’s papers, tracked for one day, showed an intriguing picture as former Israeli foreign minister and Knesset member Avigdor Lieberman was quoted as saying Erdogan "follows in the footsteps of Goebbels," while the Egyptian interim government’s spokesman called Erdogan a "Western agent." So name-calling has an international aspect.

However, when we take a step back and look at the picture in domestic politics it gets a bit more complicated. First, we need to clarify what a public figure means. Elected officials or high-level government employees are public figures with special responsibilities. Their financial resources, investments, political statements and even personal relationships can be scrutinized by the public. A journalist, a newspaper editor, an actress, an athlete are also in the public eye, and we may expect them to be role models; however, many democratic societies do not scrutinize their "famous" people in the same manner as their elected officials or bureaucrats.

In Turkey, the definition sometimes gets blurred. Erdogan justifies his anger and singling out of "pundits, actors and anyone else that speaks against him" one after another because "they criticized me, so I have a right to speak up against them; I cannot remain silent." No one denies the right to answer a criticism. But are there not better ways to disagree than threatening?

A recent case may provide further insight. During the first days of the Gezi protests an actor tweeted, "It is not just about Gezi Park, come join us." Erdogan referred to this tweet during one of his major Justice and Development Party (AKP) gatherings and said, "If there is justice in this country, we will hold you [the actor] accountable for these words." Just for one tweet, a prime minister names and shames a young actor, who is otherwise an ordinary citizen, not an elected official or a bureaucrat. By mid-August the government had to provide "state security" for the actor who was receiving threats against his life. This is just one example. Indeed, Erdogan’s style has inspired the main opposition party, the Republican People’s Party (CHP), to compile a book of the AKP’s offensive statements against the Turkish public titled "Küfürlarousse," meaning slang encyclopedia.

The example set by Erdogan is not unique to the AKP, and of course, they did not start this tradition, but due to higher levels of technological connectivity it is much faster and easier to "name and shame" someone. When the most influential leader in the country frequently reverts to this method to tackle criticism, it becomes a norm. Turkish Wikipedia has a section about caricatures that Erdogan sued.

A similar trend follows in columns and social media about how Turks deal with criticism. One common method is to smear the opponent by name-calling. Spy, provocateur, conspirator, sour grapes, liberal, pro-Iran, Salafist, Americanist, Baathist are just some of the most popular thrashing words. The second stage is declaring that the person is not literate enough: "Who are you to talk about this?" is a slap in the face which can be followed by the "if you did not condemn this event, you have no right to talk about that event" attack. The third stage is the most difficult one: shaming. In this stage, the opponent may be referred to God, because he is so hopeless only God can cure him. Then his morals are scrutinized: What he has asked or stated is attributed to his "ill-will" and it is considered "ayip" (shameful), "gunah" (sin), "vicdansiz" (unscrupulous), "namussuz" (dishonorable).

When you ask a government official who pays for the Friends of Syria meeting in Istanbul, the reply is, "In such a difficult time when innocent people are killed, how shameless are you to think about money?" This is a gridlock for any friendly conversation. Similarly, other elected officials, such as Ankara’s mayor, Melih Gokcek of the AKP, have targeted journalists with accusations of "treachery." Many Turks follow the lead government officials into what some refer as "witch hunt," "character assassination" or "social lynching."

These incidents are only a few examples. This is now the norm in Turkish politics. Definitely, the AKP has not initiated this in Turkish history. However, they have contributed to its growth on a new scale in the last decade. The revengeful "naming and shaming" has at least two unintended consequences. First, it generates a thick smoke screen behind "substance." No concrete issue can be analyzed behind this high morality and deeply religious rhetoric. How can you expect any substantial answer from an official who refers you to God for healing? Second, it harms the reputation of Turkey that prides itself as the champion of "democracy" in the Middle East. How can one claim Turkey is an advanced democracy if due to a one-line tweet asking people to join in peaceful protests an actor can be turned into a traitor and need "state bodyguards" to protect his life against threats?