A documentary dedicated to the life of Prime Minister Recep Tayyep Erdogan reveals the fault lines in Turkish politics and society. 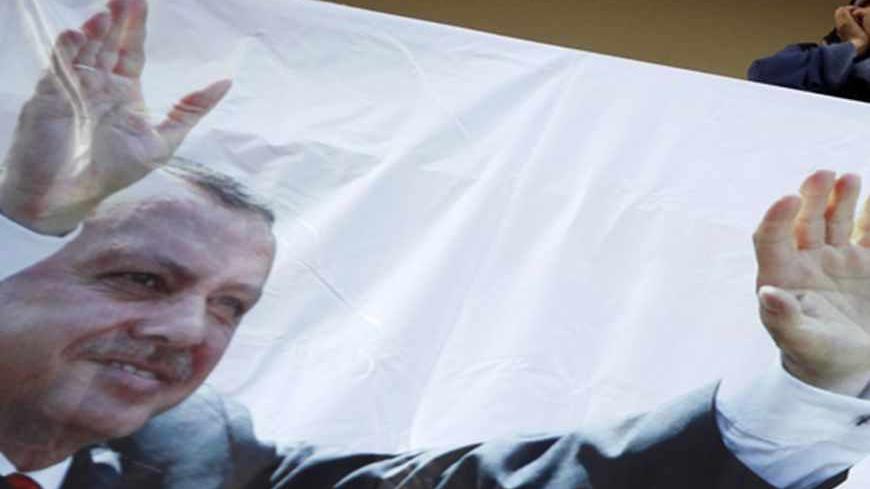 While many politicians write biographies prior to running for office and after their term is over, Turkish Prime Minister Recep Tayyip Erdogan already has had a documentary made about him. Teasers and full-page newspaper ads were released about the documentary for weeks. On the evening of Sept. 3, the documentary aired on Beyaz TV, a channel that belongs to Osman Gokcek, son of Ankara's mayor. Serving his fourth term, Ankara's mayor is a longtime notable member of the Justice and Development Party (AKP). Just this fact was sufficient to initiate rumors that this was the mayor’s way to get into good graces with the “master” for the upcoming elections.

Prior to the airing of the show, social media was already divided into two sparring hashtags. Those who support Erdogan were tweeting with the name of the documentary — #ustaninhikayesi (saga of the master). The documentary has a web page  and even its own Twitter account. The opponents, not that professionally organized, were ending their tweets with #ustaneayol (what does usta mean really?) — brushing off the show. During the show, Erdogan’s adviser team was active on Twitter. One adviser, Cemalettin Hasimi, tweeted with confidence: “The story of a leader’s life has been told several times, but is now being watched as if it was the first time. That is the heart of the matter. #ustaninhikayesi.” Surprisingly, Hasimi was wrong. The documentary was only watched by a small number of viewers. Given the media hype, it was surprising to see that it did not make it into the top 100 rating list for the evening.

What was even more intriguing was that on Sept. 4, the top trending topic on Turkish Twitter was #pabucumunustasi (master of my shoe), which mocked the documentary. Immediately, a counter-hashtag appeared: #ustaninpabucubileolamazsiniz (you cannot even be the master's shoe). You may think this all sounds rather childish, but when Ankara's mayor tweets this: “You chapuljus tearing yourself apart #you cannot even be the master's shoe,” it gains political significance. Reactions to the show have been strong — so much so that another TV channel was to air “The Real Saga of the Master” on Sept. 5, as a response to the original documentary.

The documentary is well-crafted with extreme flattery of the prime minister. It only has popular figures such as actors, singers and athletes speak about Erdogan. None of Erdogan’s real-life companions — that is, childhood friends, opponents, extended family, mentors or anyone else in daily contact with Erdogan — with the exception of Abdullah Gul, the president, appear in the documentary. It is an uphill battle for Erdogan’s advisers to present the documentary as “genuine” and “sincere” when Hidayet "Hedo" Turkoglu, a Turkish NBA player, appears declaring Erdogan to be an influential leader not only in the United States but all around the world.

Indeed, the show was another sign that Turkey is now clearly divided into at least two camps: those who will support Erdogan and others. A group calling itself Bursa Collective Cinema posted a YouTube video, which became an instant hit, as a reaction to the documentary. It is sarcastically titled “Thanks to the Master.” The video shows young Turks thanking Erdogan for “thinking on their behalf,” for "the freedom to carry machetes on the streets,” for "the idea of having at least three children,” for “the creative penguin shows on TV,” for “losing their eyesight due to pepper spray and tear gas on campuses” and for "destroying all art he deems ugly.”

Birgun, a newspaper which now employs a group of journalists who have been blacklisted as critics of the AKP, published a piece titled “Master’s very sad story” that asked people who have been penalized during AKP rule to share their views of Erdogan. One of the journalists said, “During the 'master's' era, I see an Erdogan who is angrier, less tolerant, more aggressive, a discriminating and destructive prime minister.”

Has Erdogan's cult reached its tipping point with the documentary?

The documentary, rather than presenting a down-to-earth story of Erdogan, seems to have opened the doors to the debate whether “Erdogan is the master of fairy tales.” The most important of these were the Gezi Park protests and Erdogan's public visibility.

Gezi Park protests are not over. Erdogan is not over it. In the documentary, he expresses several times how hurt he is due to the “latest events,” and reiterates how respectful he is of every lifestyle choice. The opposition is not over it either, as several images were shared on social media from the Gezi Park protests. Almost any opposition is now labeled ‘’pro-Gezi.’’ This has a few implications. The AKP has attempted to discredit the movement's participants as chapuljus, a term which was also used for members of the Kurdistan Workers’ Party (PKK) — a State Department-recognized terror organization — years ago, and remains alive in the Turkish memory. Even AKP voters are labeled chapulju if they dare ask whether Erdogan should be spending all his time and effort on a show like this — while the country has profound security concerns on the Syrian border — or whether it is halal to brag about oneself?

Turks are “burned out” with images of Erdogan. Erdogan is everywhere. His deepening cult angers Turks from different walks of life. It is a vicious circle: the more Turks start to mock Erdogan, the more defensive he and his advocates become. For example, in the documentary many asked, “Is he crying yet? Is he reciting a poem? Let me know when it is time for tears.” Others have said, “Real masters drop tears of sweat from hard work, Erdogan has tears of whimpering.” Erdogan’s victimhood rhetoric backfires to some extent. Many who commented on the show did not watch the show. Having been in government for over 10 years and still not even having resolved major problems — the headscarf issue for instance — Erdogan can still repeat his claims on freedom for hijab as a cause for his dawa (struggle). A prominent pro-AKP journalist told Al-Monitor, “Turks are more curious about what is said about Erdogan than what Erdogan says.” The saga of the master, therefore, was interpreted as ”stories from the master.” Now, “saga of the master” has become a sarcastic phrase to refer to “all things” wrong with the AKP government.

Maybe the most realistic part of Erdogan’s documentary is the final scene. A young boy carrying a box stops in front of a wall with Erdogan’s painted image, sits down and opens his shoe-shine business. The ending is a poignant reminder that in Erdogan’s “new Turkey” child labor is a fact that we cannot escape, even in a professionally crafted documentary to extol "the master."