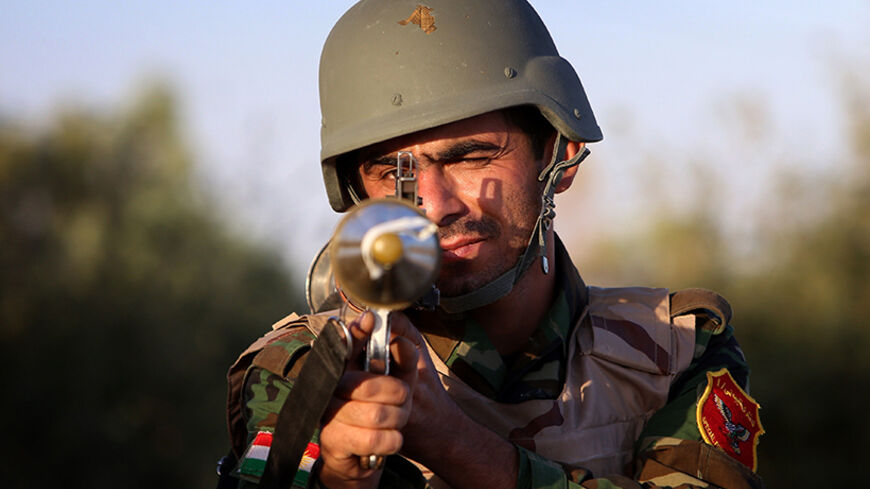 An Iraqi Kurdish peshmerga fighter poses for a picture on the frontline in Makhmur during clashes with Islamic State militants, Aug. 9, 2014. - SAFIN HAMED/AFP/Getty Images

GWER, Iraq — The ongoing conflict between the Islamic State (IS) and the Kurds in northern Iraq has fueled ethnic tensions between Iraqi Kurds and Arabs, with many Kurds accusing local Arabs of supporting IS.

Small anti-Arab protests were dispersed by police in the Kurdish capital of Erbil the afternoon of Aug. 9, and in the town of Gwer, just 30 kilometers (18 miles) outside the main checkpoint leading to Erbil. Kurds accused the local Arabs of supporting the Islamist militants.

“We know them face by face, name by name, and we even know where they live. I don’t know what happened,” a Kurdish teacher from Gwer, who wished to remain anonymous for security reasons, told Al-Monitor.

In May 2013, Erbil was named the Arab capital of tourism for 2014. The city had anticipated at least 3 million visitors in 2013, including many Arab tourists from Iraq, but the situation has drastically changed. Instead of hosting tourists, Iraqi Kurdistan is now a refugee haven for those fleeing the fighting between IS militants and government forces.

Many Kurds now worry that Arabs will form sleeper cells in Kurdish cities after IS' major attacks against Kurdish towns in early August. Reports suggested that many displaced Sunni Arabs sympathized with IS militants, with some sympathizers arrested by the Asayish, the Kurdish security police.

Locals in the town of Gwer on the evening of Aug. 10 said the Arabs and Kurds lived peacefully in the town before the conflict erupted.

“The Arabs and Kurds lived together in Gwer. We ran away three times from Gwer, once in 1991 from Saddam Hussein, in 2003 during the liberation of Iraq and this is the third time. We Kurds never hurt the Iraqi people, but the Arabs are still against Kurds. We Kurds live together with so many groups — Yazidis, Christians and Arabs — but they just see themselves as Arab and Muslim. They say the Kurds work with the coalition forces, and that’s why they fight against us,” a teacher who now lives in Erbil said.

Gwer was briefly occupied by IS militants on Aug. 7, prompting most of the Kurdish population to flee. On Aug. 10, with US air support, Kurdish forces retook the mixed Arab-Kurdish town. This time, most of the Arab population left, fearing reprisal attacks after IS militants looted Kurdish homes, according to Kurdish security sources.

Omar Ramazan, a Kurdish fighter, said many Arabs joined IS in Gwer. “One of them was the subdistrict manager of the local municipality, Haji Fayez. He was not killed, but he ran away. A lot of people from this town gave information to IS,” he told Al-Monitor.

Some Gwer residents said they did not expect the locals to join the IS militants. “We thought Gwer was safe. We have a lot of friends in the area. But then we got orders to pull back. We did not suspect the local Arabs would suddenly rise up. We had no chance and we had to pull back. They had sleeper cells here,” said Mohammed Ali, a local member of the Kurdistan Democratic Party (KDP), who now carries a gun.

“We have to open a new page with them. We trusted them after the fall of the regime — we let them have some guns. We didn’t expect them on the ground to [form] some organizations. Some of them were even KDP, and we tried to work with them, but it was all just a show,” said Ali.

Ali was optimistic that the Kurds can work together with the local Arabs again. “We believe President [Massoud] Barzani will give them amnesty and welcome them back.”

Angry Kurdish security officers at a checkpoint outside Gwer accused local Arabs of looting Kurdish houses. “Kurds always respected them, but Arabs robbed their homes. President Barzani supported and helped them, and this is their thanks,” said a police official who refused to give his name.

Despite the anger of many Kurds, the Kurdish government has tried to assure local Arabs that it is not against them.

“We will not allow the terrorists to destroy the historic relations between the Kurds and Arabs,” Barzani said during an Aug. 10 news conference with French Foreign Minister Laurent Fabius.

Cemal Murtke, a leading Kurdish commander in Gwer and a parliament member, told Al-Monitor that the Kurdistan Regional Government (KRG) has no problems with Arabs.

“These people who joined IS can come back, and we will not fight them. We don’t have any problem with any nationality and we have no problem with Arab people. For us, there is no difference between Arabs and Kurds,” he said. “Most of them are not willing to join IS. Most of them have lost a lot in this situation, and only a minority wants to join them. Of course, there might be some of them in Erbil or other places. But the majority of them do not want to join them.”

But Gwer Mayor Diyar Abdullah says there might be some revenge attacks: “Some Kurdish people might come back and try to take revenge. That is normal in this situation since some Kurdish houses were looted. They were angry.”

In fact, not only Arabs have joined IS. Reportedly, 400 Kurds are among the group's ranks in both Syria and Iraq.

IS posted a video online after taking the Kurdish town of Sinjar, showing Kurdish IS fighters stomping on a picture of Kurdish nationalist leader Mullah Mustafa Barzani in early August.

Bashdar Ismail, an ex-commander of the 49th Brigade of the 12th Division of the Iraqi army, who now works with the Kurdish armed forces in Gwer, agreed with Murtke: “We have to differentiate among the people. I told many Kurdish reporters that Gwer belongs to both the Kurdish and Arab people.”