News anchors, security experts and Knesset members are all raising the panic level through the media over the rocket fire, enjoying the attention they are receiving during the “disaster marathon.” 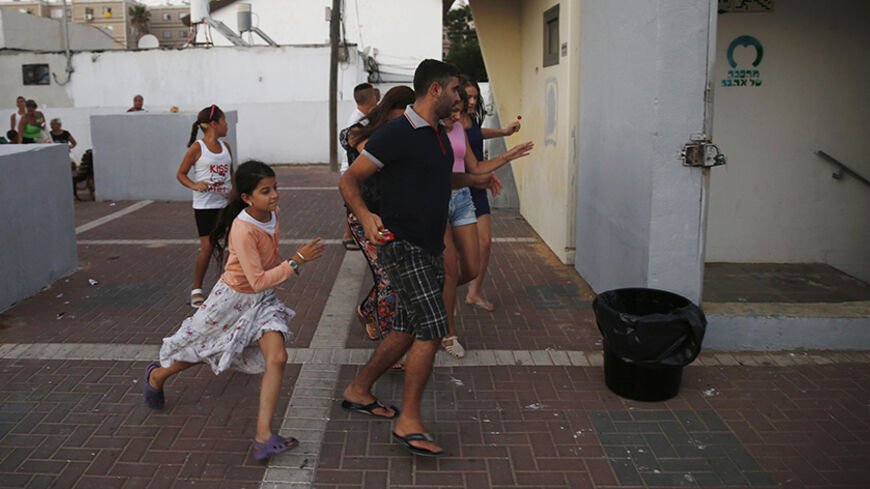 Israelis run toward a bomb shelter as a siren sounds warning of incoming rockets in the southern city of Ashkelon, July 9, 2014 - REUTERS/Baz Ratner

“I'd propose that we don’t start to panic. The Israeli public knows how to act. Everybody knows what to do if the alarm goes off,” said Tel Aviv Mayor Ron Huldai, who was trying to lower the public’s anxiety level — but to no avail.

Huldai, who's also a brigadier general in the reserves and a former fighter pilot, was being interviewed July 8 for the main news broadcast on Channel 2, shortly after the siren went off in the Tel Aviv metropolitan area, and a rocket fired from Gaza was shot down over the skies of Tel Aviv. The original purpose of the interview was to inform Tel Aviv residents that the municipality had decided to open its public shelters, and to deliver a soothing message. Instead, Huldai found himself in the center of a media event that is disconcerting to say the least.

Since the early hours of that afternoon, the country’s three main TV channels had entered into a broadcasting marathon of nonstop live coverage. Their studios were filled with officers from the Home Front Command, inflammatory politicians and military experts. Every few minutes reporters on the scene interrupted the broadcast to report on more rockets being fired. Again and again, the screens switched to live shots of Tel Aviv residents running for cover, while sirens wailed in the background. Again and again, they showed screen shots of rockets fired from the Gaza Strip being shot down. And in between all of that, they aired short interviews with the terrified residents of the south.

Millions of anxious Israelis were glued to their TV sets, starving for information. Instead they were subjected to stern-faced news anchors who exacerbated the drama with their bellicose tone. Those anchors kept reporting on how the Cabinet granted the Israel Defense Forces (IDF) permission to draft as many as 40,000 reservists if necessary.

With the sense that the country was heading toward an “impending disaster” being promoted on live TV, Huldai sounded like a party pooper. “I think we should carry on with our lives as normal,” he said, trying to put what was happening into proper proportion, explaining: “Hamas lacks the capability to interrupt all life in the State of Israel. It would be better if we did not raise the tone, if we maintained our deliberation and composure, and if we acted seriously and slowly.”

At one point he even seemed to admonish anchor Dany Cushmaro, saying that the media was fueling the anxiety. At that point the interview with him was quickly cut off. From the sidelines it seemed as if someone on Channel 2 News was disappointed that the mayor didn’t provide the requisite panic. Sadly, Huldai was a lone voice of dissent in the endless chatter, which lasted late into the night and continued the following morning, even though there really wasn’t much to say.

It's hard to ignore the thought that the news networks are largely responsible for the stark rise in the anxiety level in Tel Aviv and the center of the country. It was as if they had their own reasons for preferring not to put what was happening in the right proportion. On July 8, the Iron Dome anti-rockets system shot down four rockets between the towns of Gedera and Hadera, from the south to the north. No one was hurt. There was no damage. It was hardly the kind of event that should bring life in the center of the country to a standstill.

The most prominent example of coverage intended to make events seem more serious than they are is the stubborn insistence of almost all the media outlets that they describe what is happening as “missile” fire, when the weapons that Hamas is firing at Israel are rockets. The morning papers reported on “Missiles over Israel,” and both news sites and the various TV channels picked up that misleading expression. On July 9, the head of the Institute for Strategic Studies, Maj. Gen. Amos Yadlin, tried to insert some calm into the discussion taking place in the Channel 2 News studio. “Let’s be accurate about it,” he said. “Hamas has no missiles. All day I’ve been seeing reports about missile attacks on Israel, and there aren’t any missiles!” His words were swallowed up in the vacuum that is the studio.

“The hysteria being created here serves the interests of Hamas first and foremost,” claimed a politician from the right, who asked to remain anonymous for the time being. “It looks like all the citizens of Israel are working for Hamas. A few missiles fired at Gush Dan [metropolitan Tel Aviv] determined the day’s agenda, as if we didn’t have the best army in the world. This is a security event that is being covered in a way that serves the interests of the commercial media networks, which need the ratings, and the politicians, who need airtime and get an almost unlimited amount of it. With all this commotion, there is no one to calm the public down, and when someone like Huldai tries to do it, they silence him. Hamas doesn’t need much more than that. We’re collaborating with it.”

Media researchers Tamar Liebes and Zohar Kampf call the phenomenon of round-the-clock open studios a “disaster marathon.” In their book "Transforming Media Coverage of Violent Conflicts," they describe this phenomenon, which has become part and parcel of the Israeli news media since the big terror attacks of the mid-1990s.

“What we’ve been seeing in the past few days, ever since the launch of Operation Protective Edge, is hardly exceptional. It is the norm in times like this,” said Kampf in a conversation with Al-Monitor. “The same thing happened with the live broadcasting marathon during the Second Lebanon War, throughout Operations Cast Lead and Pillar of Defense, and even during the terrorist attacks of 1996.”

Kampf went on: “There’s a feeling that something could happen at any given moment, and when nothing actually does happen, the time has to be filled with discussions, hours upon hours of discussions, about what could happen. They interview people who were close to the site of the disaster, and of course, they are very upset. Sometimes they demand that the government do something, and they pressure the government to act. In that case, there is no doubt that the live broadcast marathon only intensifies the effect of the rocket fire in a way that is very disproportional to the actual damage it causes. The coverage takes on an emotional dimension, relaying a kind of helplessness. People sit there waiting for the rockets to fall.”

Does Kampf think the media should show a modicum of responsibility?

"That’s a question that researchers ponder quite a bit as well, and the answer is complicated," Kampf said. "After all, in situations of crisis and anxiety, the public needs information, so there is a value to live broadcasts. But at the same time, the channels have to fill hours upon hours of airtime. What do they do when the pace of events doesn’t justify so many hours of coverage? They bring talking heads to the studio, meaning politicians, experts and commentators. And what happens when the mayor of Tel Aviv doesn’t provide the drama? They take him off the air, because they prefer to interview subjects who create drama and suspense.

"There is also an aspect of commercial media and the competition between the channels over ratings and viewers, which intensifies the 'disaster marathon.' No channel wants to be the first to leave the live broadcast, since they are afraid that their viewers will just switch to another channel. That’s why Israeli media coverage of Operation Protective Edge actually marks 20 years of this 'disaster marathon' phenomenon."