The sirens of Tel Aviv

The people of Tel Aviv insist on maintaining normalcy by going to the beach and watching the World Cup, despite the rockets flying overhead, yet, something in the city has cracked this time around. 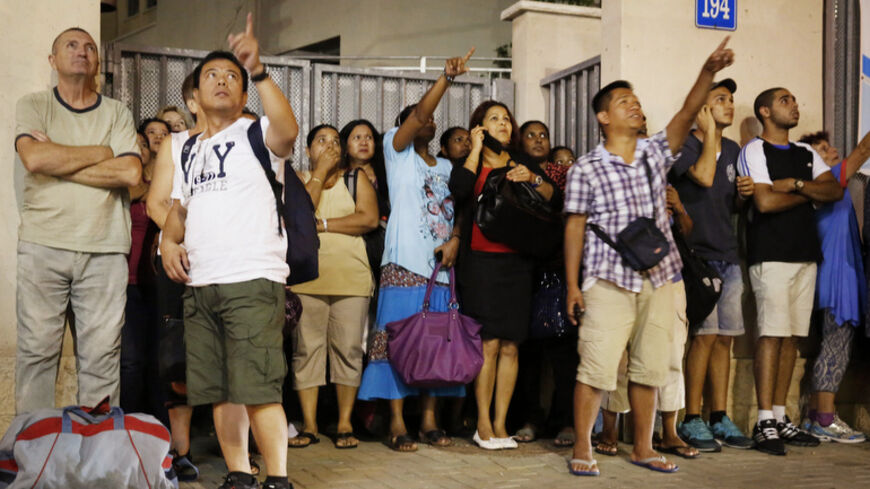 People point to an Iron Dome missile trail, after an Iron Dome was fired to intercept an incoming rocket, during an air-raid siren warning of a rocket attack in Tel Aviv, July 12, 2014. - REUTERS/Finbarr O'Reilly

A friend of mine who was in New York on 9/11 told me that in the days and weeks following the attack, one could feel how the city had lost its soul. What is happening now in Tel Aviv is hardly as dramatic as that attack, but the streets are radiating a rather dark and gloomy sense, gnawing away at the special spirit of Tel Aviv and ultimately overwhelming it. This is a city in the middle of an anxiety attack. Yes, it still functions, but its nerves are on edge.

When the first rockets were fired on Tel Aviv on July 8, it still seemed as if the city had managed to preserve the cynical self-confidence that protected it from the harsh realities of the Middle East. Tel Aviv was no stranger to rocket attacks. It had come under fire during Operation Pillar of Defense in 2012. At the time, it ridiculed the attacks with the kind of self-confidence that very few people possess. It wasn’t a bad thing either. The capacity that people who live in Tel Aviv have to continue enjoying their lives, even in times of crisis, is one of the most charming aspects of life here, in what many people call “Israel’s only real city.”

Chairs filled the sidewalk outside a popular old pub, across from a huge TV screen. Dozens had gathered to watch the German soccer blitzkrieg against Brazil. The first time the ball got past the Brazilian goalkeeper — the first of seven goals — two loud explosions could be heard high above. That was hardly enough to stop the people sitting there from cheering. Afterward, a few people looked around, wondering what had just happened, but no one thought for a moment to leave their seat or put down their beer to go to a protected space, like a public shelter. One of the women sitting said, “It’s pretty surreal, what’s happening here,” but that was the most dramatic response to the dissonance. It was as if it had all been erased by this rare example of virtuosity in soccer.

Tel Aviv’s Mayor Ron Huldai can claim that the people of his city are taking what’s happening with a degree of equanimity. The newspapers can continue claiming that the people still living the good life in Tel Aviv provide a solid “protective edge” to the city, still, sometime between that past Tuesday and this weekend, there was a crack in the veneer of Tel Aviv’s ability to have fun. The trauma is creeping into the protected space of people’s consciousness. Tel Aviv is not the southern city of Sderot, and it certainly isn’t Gaza. The people living here are hardly the main victims of the current campaign. But the same sharp tenacity, accompanied by complacency, self-deprecating humor and a firm grip on life has been shaken more than it has ever been since I came to this city 10 years ago.

On the night of July 12, Hamas announced it would be firing a barrage of rockets on Tel Aviv at precisely 9 p.m. Facebook was immediately plastered with all sorts of jokes and witty remarks. When 9 p.m. came around, however, the whole city held its breath. Psychologically speaking, the announcement worked. At that moment, Tel Aviv was on the verge of a nervous breakdown. Based on what people in the shelter said, the rockets that did in fact soar overhead, only to be shot down, were much less effective than anticipated.

The people of Tel Aviv who went through Operations Pillar of Defense and Protective Edge are still the children of their parents, the people who climbed up to their roofs in Tel Aviv during the first Gulf War in 1991 to watch Iraqi Scuds fall on their city. The young people of today (myself among them) feel they must demonstrate the same resilience. They’ll make sure to go to the beach on Friday and have a beer on Saturday afternoon. They’ll show bold contempt for orders and instructions from the Home Front Command. After all, they still have a reputation to uphold.

Back in 2012, right in the middle of Operation Pillar of Defense, some of Tel Aviv’s more creative wits released a humorous video clip about the silly things that “Tel Avivians say during an attack.” With the city suffering minimal physical damage, and the air-defense Iron Dome system allowing people to go about their regular lives in the shadow of the rockets, Tel Aviv is contending with the strange challenge facing it: leading a hedonist big city life during a real war.

But the soul of a city is measured by more than just physical damage. Any evidence of harm to the city is actually quite trivial. The streets are just emptier than usual. People no longer keep driving when the siren goes off. Instead, they stop their cars and lie down on the side of the road. The huge TV screens that almost every business hung on its wall for the World Cup are now being used for group viewings of news broadcasts. It is almost surreal. Groups of Tel Avivians sit in kiosks eating sunflower seeds while they watch the bombing on HD.

And there is something much deeper, too. I saw it one morning when a siren sent me down to the bomb shelter (pardon the embarrassing cliche, but with an espresso in hand). I was joking about it like a real Tel Avivian, only to find neighbors there, who weren’t amused at all. They were terrified. I could see it in their eyes. It could still be seen when they stayed in the shelter long after the last explosion. And it can still be seen now, outside the shelters, too. The whole tone of the city has changed. A close friend who we met in the park told us that as soon as she got there, her son asked: “What do we do if the siren goes off? Where’s the nearest protected space?” Our building is close to a very popular public park. Now, whenever the siren goes off, parents come running to our bomb shelter with a child in each hand. They are all hysterical. They’ve all left bags and strollers behind.

Children are a big part of the story. While the current hysteria undoubtedly has a lot to do with the relative frequency of rocket attacks on Tel Aviv compared with the isolated incidents during Operation Pillar of Defense, there is more to it than that. The number of children living in Tel Aviv has been growing consistently. Once it was quite common for a young couple expecting a child to start looking for a home in the country. Today, however, more and more young families choose to stay in the city. In 2012, there were 14,000 children in Tel Aviv between the ages of 3 and 5, compared with 11,500 in 2011, and the number has increased in the two years since. It is very easy to smile dismissively or even to get excited at the sound of an explosion overhead when you’re 25 and single. But if you’re caught in an open area with two small children when the siren goes off, the arrogant apathy is forced to give way to anxiety. In Tel Aviv today, more and more 30-somethings feel that anxiety. It is far less important for them to prove how strong they are, and they are reshaping the face of the city.

In that sense, Tel Aviv is different from the other cities that make up Israel’s newest front: the cities of Rehovot, Nes Ziona, Gedera, Yavne and the surrounding area. The people who live in these towns have never been suspected of sharing the detached hedonism of Tel Aviv. When rockets fell on them during Operation Pillar of Defense, no one said, “You deserve it,” like quite a few people said about Tel Aviv. Nor have they been forced to live in that strange limbo, knowing that their city is Israel’s cultural and recreational capital (even now, its restaurants, bars and clubs haven’t stopped operating for a minute), even while it is a city under attack.

But the difference in mood between Tel Aviv and the periphery is getting smaller and smaller. Even the way people talk in Tel Aviv has already changed. Along with a growing sense of victimhood, more and more people in this liberal city can be heard saying that they understand why the Israel Defense Forces are attacking Gaza like they are. Conversely, there are also fewer voices opposing the attack. For the first time since the awful terrorist attacks of the second intifada, it seems as if maybe the people of Tel Aviv have reconnected with the Israelis.