Thai field workers in the south of Israel are left in the open as farmers fail to provide portable shelters. 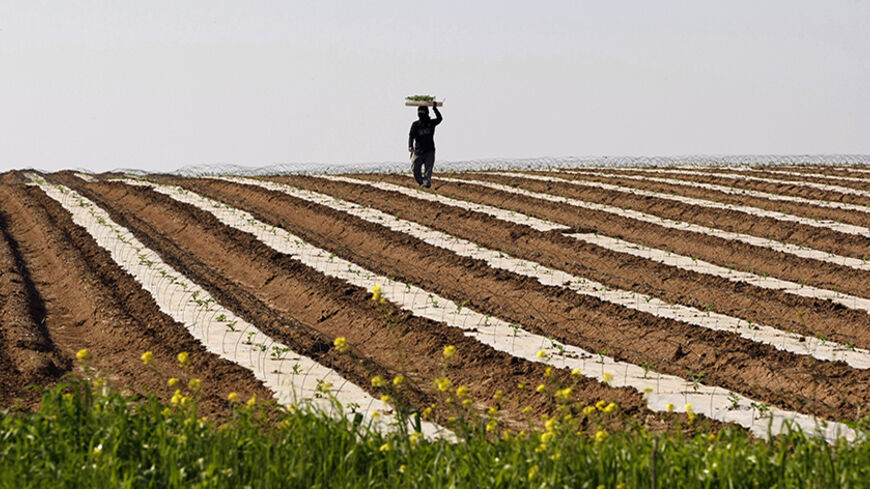 The nongovernmental organization Worker's Hotline, which advocates for workers' rights, estimates that about 10,000 Thai workers are employed in Israel, most of them in the fields of the south — places described these days in the media as “open spaces.” When Israelis hear on the news that a rocket from Gaza landed in an open area, as opposed to one that is built up, they feel relieved. But for the Thai laborers, the fields are a battlefront in every sense, except that for the most part they are not equipped with shelters or an Iron Dome missile defense system. And so, sadly, a foreign laborer was killed on July 23 by a mortar shell while working in one of the hothouses in the Hof Ashkelon Regional Council.

In recent weeks, some Thai workers have posted photos on their Facebook pages, as well as on the page of the Worker's Hotline, showing their predicament since the start of the clashes in the south. They took pictures of themselves standing next to iron poles scarred by bullet holes, inside hothouses destroyed by rockets and also cowering under trees — absent any real shelter. According to the Worker's Hotline, ”Although the hiring of migrant farm laborers is now governed by a bilateral agreement between the two countries, neither country takes upon itself the responsibility for the workers’ safety in times of war."

Last week, the organization wrote to the Ministry of Defense, saying, “With the escalation of the past week, information has reached us that only a handful of farmers have bought portable shelters for their workers and placed them near their living quarters and work areas,” and demanded to know how the Ministry of Defense intends to deal with this issue. Right now, they explain, the farmers do not know whether the state will compensate them for lost revenue as a result of the fighting, and they therefore send their workers to the fields that lack sufficient shelters.

Noa Shauer, the Worker's Hotline coordinator of farm workers, tells Al-Monitor the Worker's Hotline is inundated with calls. “Many workers have been calling us in recent days, mainly about being forced to go out and work in open areas on the Gaza border, in the Shaar Hanegev, Eshkol and Ramat Negev regional councils. They are forced to work in open areas, where rockets land, without any chance of reaching a shelter when the warning sirens go off. They are not protected,” she says. “There are several recurring themes in these calls. Some say, 'I’m being forced to go to work and I don’t want to, talk to my employer.' Others recount that 'rockets are falling here, I want to return home, what should I do?' Others, still, ask to be placed elsewhere, but the placement agencies [private firms licensed by the state] reject responsibility for them.”

Today, following the death of the foreign laborer in the south, the organization called yet again to take care of the workers' safety: "What happened should surprise no one. … We call for immediate action to care for the workers safety in "open spaces." We also call on the State of Israel to grant the slain worker the status of fallen by terror acts, and compensate his family similarly to the families of Israeli fallen."

Soubhan Vanshali, a Thai laborer who has been working at the cooperative village of Netiv HaAsara for over seven months now, tells Al-Monitor that the workers are “scared. They are frustrated with the situation, with their employer, and with Israel.” Vanshali is a relatively new worker, so this is the first time that he is encountering the harsh security situation in Israel. According to him, however, even more veteran workers, like those who are experiencing it for the second time, haven’t gotten used to it and are scared, too. “You can’t get used to it,” he says, “and this time it is even more frightening than the last time.” He describes a daily schedule that lasts from 6:30 a.m. until 6:30 p.m., with a half-hour break midday, during which the workers flee the rockets regularly.

Several communities are considered “foreign” in Israel, and their attitude toward the security threat varies. The Thai workers come to Israel under contract for a set period, given the difficulty of finding work at home. They are mostly placed in the south, often without any help in coping with the threat to their security. They are scared and feel abandoned.

Another group includes asylum seekers and refugees from Sudan and Eritrea. They, according to aid organizations, do not seem worried by the situation. The horrors they experienced in their homeland appear to have inured them to a great extent to the sights and sounds of war. In the south of Tel Aviv, where most of them live, there is no perceptible change in their behavior in light of the war in which Israel is engaged. “The general sense among the refugees is that no one is terribly excited, both because they have really seen far more shocking things in their homeland and because, in effect, nothing concrete has happened in most of the places where they congregate — there are sirens and explosions, and often damage to property, but there’s no loss of life,” Sigal Rozen, public policy coordinator at the Hotline for Refugees and Migrants, tells Al-Monitor.

The refugees who wander the streets usually shy away from speaking to reporters, but the little they are willing to say is that despite the fear of rockets, they feel safer in Israel than in their home countries. "Among them," Rozen says, “there are thousands of asylum seekers jailed in facilities in the south of the country, in Holot and Saharonim, which, in effect, are not reinforced.” She claims, “At the Holot facility, the shelters were locked until recently. At Saharonim there is no shelter and people are instructed to go into their rooms when the sirens go off, except that the rooms are actually pretty flimsy.”

Refugees jailed at these detention facilities call Rozen every day and tell her that they constantly hear bombardments. “They actually don’t even know who is shelling, and most probably it’s shelling of Gaza by the Israel Defense Forces [IDF], which is hardly likely to hit them. There were those who claimed that a mortar fell right by the facility, but I found no such indication in media reports,” she says. According to Rozen, the inmates “are more concerned about being jailed there for an indefinite period than they are by the security situation.”

Shauer claims that Israel expects the Thai workers to identify with the state and mobilize for the national cause: “There’s a sense that we are expected to be united and it’s expected that the foreign workers will mobilize for this national war — that they should sacrifice their lives on the altar of the campaign in Gaza as if they were soldiers.”

Vanshali echoes Shauer, saying that the Thai really do have a hard time identifying with Israel. “What Israel is doing with the occupation is wrong,” Vanshali says, “but we care about both sides. At the same time, we don’t fully understand the local problem.” He spoke to his family recently and says, “They want us back home, but we don’t want to go back yet, because we still have debts to repay, and we don’t have money. We want to go someplace else, to work someplace safe, without any missiles over our heads.”

Unlike the Thai, explains Rotem Ilan, an activist for migrants' children, among the Filipino community things are totally different. “Part of the narrative of this population, part of their struggle to obtain legal status in Israel, is that they have been here for many years and they are part of the state, that they are Israelis of a different kind,” she says in an interview with Al-Monitor. “So along with the true sense of fear about which I hear, there are also mechanisms that push them toward deep identification with Israel.”

This sense is expressed by Luz, a Filipina living in Shapira neighborhood in south Tel Aviv. She is a mother of three, one of her sons is about to end his mandatory military service and another son was drafted on July 22. “We are part of Israel and we identify with Israel,” she tells Al-Monitor. “We have been here for so many years and our attitude is first and foremost in favor of Israel.” She says the Tel Aviv municipality, through its Mesila aid center for migrant workers, conveyed precise instructions by the Homefront Command, in her language, explaining exactly how people should conduct themselves during a warning siren.

Aid workers say that unlike previous military operations, the Homefront Command and the municipality made an effort to provide solutions for a broad array of foreign communities: leaflets with instructions in different languages — including Arabic and Tigrean — were distributed so that people would know how to react, even in the kindergartens illegally run by the various foreign communities in Tel Aviv.

“One cannot say that they are not involved and that they’re not afraid,” Ilan says, “some have children in the army. Some have children living here amid the sirens and explosions — this is not something one can simply ignore and [then] get on with life. We feel today that they are very scared, on the one hand, and on the other, they very much want to be part of it.”

She recalls the prayer service organized by the women of the Filipino community at Tel Aviv’s central bus station on July 19 under the slogan “For peace and the protection of the people in Israel” — Philippine flags were hoisted alongside Israeli flags.

Luz says that her main concern is for IDF casualties, and that is understandable in light of the fact that her sons are serving in the military and the city in which she lives is probably not really a dangerous place. “Sirens are only a little scary. It’s true that we don’t know where a rocket will fall, if it will blow up in the street or land on a house, but we do our best — we go to a shelter or into the stairwell. I am especially scared for the soldiers. I don’t want anything to happen to my boys or to other soldiers. I just want my children to be OK.”

Luz expresses great political identification with Israel. “The Palestinians are mad,” she says. “They don’t want to stop firing. We know that the Israelis, the Israeli government, want peace. If the Palestinians don’t, so what can we do? The army has to fight. The soldiers sacrifice themselves and all the parents are afraid. We see it on television, parents crying for their family.”