Sudanese and other African refugees fleeing persecution often do not find a welcome reception in Israel, writes Jillian Kestler-D’Amours from Tel Aviv. 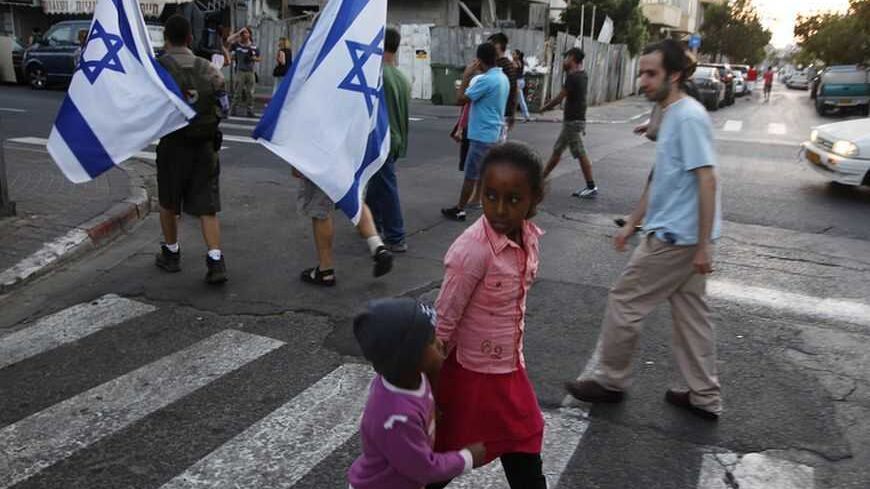 Children cross the street as residents of south Tel Aviv carry Israeli flags during a protest against African migrants living in their neighborhoods May 30, 2012. - REUTERS/Baz Ratner

TEL AVIV, Israel — Sitting on his bed in a cramped south Tel Aviv apartment, 28-year-old Adam Keala fishes a bright green Sudanese passport out of his backpack. Flipping to one of the pages, he points to four words: “All Countries Except Israel.”

“If anyone goes back, they will be killed or put in prison. 100%,” Keala says. “From 2011 until today, I know at least five people personally that are in prison [in Khartoum] because they had been to Israel. We cannot go back to Khartoum.”

Keala escaped war and genocide in his native Darfur region of Sudan. After a hazardous journey through Egypt — including escaping from Bedouin traffickers and narrowly avoiding being shot by Egyptian soldiers in the Sinai desert—he entered Israel through its southern border in 2005.

He spent two months in an Israeli prison before securing a “Conditional Release” visa. Renewed every few months, the permit does not allow Keala to legally work in Israel and provides him with no social rights or protections.

“Today I live here alone without any family. Do you think I like this?” Keala, who speaks fluent Hebrew, said. “Something called war destroyed everything.”

Last Tuesday, Israeli Interior Minister Eli Yishai confirmed that more than 2,000 Sudanese asylum seekers, along with dozens of Eritrean asylum seekers, were taken from detention facilities in Israel, and “voluntarily” repatriated to their home countries.

“If we were not limited by laws we would deport them all, and so within a legal framework we will deport them whether they volunteer to leave or not. We are determined to complete this mission,” said Yishai.

The United Nations' high commissioner for refugees in Israel, William Tall, told Haaretz that an “agreement to return to Eritrea under an ultimatum of jail … can't be considered voluntary by any criterion. It is explicitly not voluntary return.”

After a firestorm of international criticism, the practice of repatriating African refugees was stopped on an order from Attorney General Yehuda Weinstein, who said he needed more time to clarify Israel’s legal responsibilities in the matter.

According to Orit Marom, advocacy coordinator at the Tel Aviv-based Aid Organization for Refuges and Asylum Seekers in Israel (ASSAF), the recent deportation — which cannot be described as ‘voluntary’ and are, in fact, illegal — show just how desensitized Israeli society has become to injustices carried out against African refugees.

“Slowly, slowly, Israel is losing any sense of being ashamed of what [it is] doing. We are sending people to their death, not less than this,” Marom told Al-Monitor.

“The Israeli society and the Israeli government [have] become blind, become indifferent, to peoples’ lives. It means that the demonization of this group of people, of those asylum seekers, that was done during those last years, was actually successful because nobody sees them as human beings anymore.”

In January 2011, the Israeli government passed the “Anti-Infiltration Bill,” aimed at stemming an alleged influx of African refugees into Israel. An estimated 60,000 African asylum seekers, mainly from Sudan and Eritrea, currently live in the country.

The bill was an amendment to 1954 Israeli legislation originally aimed at stopping Palestinian refugees from returning to their homes in the newly-formed state. Today, it allows Israel to imprison people who have entered Israel without legal authorization for three years, without charge or trial. Refugees from so-called “enemy states,” including Sudan, can be detained for unlimited periods of time.

At the same time, Israel began constructing a fence along its southern border with Egypt — a point through which many of the asylum seekers enter the country —and large detention facilities to hold asylum seekers once they are imprisoned.

While Israel is a signatory to the 1951 convention relating to the Status of Refugees, it has not adopted clear procedures to assess claims for refugee status, and instead maintains a policy of not processing applications. According to the Tel Aviv-based African Refugee Development Center (ARDC), Israel has recognized less than 200 refugee claimants since the country’s creation in 1948.

In June 2012, Israel deported hundreds of South Sudanese refugees, including dozens of children, after the government deemed conditions in the newly formed state to be secure enough for them to return.

Last September, Israel denied entry to a group of approximately 20 Eritrean refugees who were caught between Egyptian territory and Israel’s fence in the south. After a week spent in the blazing sun, Israel agreed to allow two women and a young boy into the country, but sent the rest of the group back to Egypt.

According to Orit Marom at ASSAF, a recent Interior Ministry procedure whereby Israeli police can stop asylum seekers in the street on suspicion that they have committed a crime, and can put them in jail under the “Anti-Infiltration Law” without charge or trial, has instilled a widespread sense of fear within the refugee community in Israel.

“If people cannot even walk safely in the streets, if they don’t know what to expect tomorrow, when they even cannot complain [if] their employer exploits them, some of them reach a point where they say, ‘OK, maybe better I will try to continue my search for asylum [elsewhere],’” Marom explained.

“They think, ‘Maybe [it is] better [to] go to die in my homeland, or take the risk of being killed in Khartoum, than [to] stay here in Israel.’”

Months of rhetoric turn to violence

Israeli politicians have been at the forefront of a campaign aiming to expel African asylum seekers from Israel. African refugees have been regularly referred to by politicians, and in media reports, as “infiltrators,” and accused of carrying diseases, stealing and raping Israeli women.

In May 2012, Israeli Prime Minister Benjamin Netanyahu said the presence of African refugees in Israel “is very grave and threatens the social fabric of society, our national security and our national identity.”

Recently, this rhetoric has translated into violence.

Molotov cocktails were thrown at a refugee-run day care center last year, and violent riots broke out during right-wing protests against refugees through South Tel Aviv, an area where many African asylum seekers live. Asylum seekers have also been attacked in streets throughout the country.

“In the beginning, it wasn’t like this. Today, you can see that what the government is doing, the citizens are doing too. If someone comes from a country where there was genocide, where there was war, how can he be an infiltrator?” said Sudanese refugee Adam Keala.

Despite the Israeli claims that the recent repatriations were carried out with the asylum seekers’ consent, Keala told Al-Monitor that African refugees in Israel are struggling to survive and, threatened with spending at least three years in prison, don’t have real options.

“It’s not a choice. People are sleeping in the street because they don’t have jobs. It doesn’t mean people want to go back,” Keala said. “People are in the fire here. No person wants to go back to genocide.”