Many elderly residents of the rocket-afflicted areas around Gaza react with calm and resilience to the sound of the sirens and even refuse to hurry into shelters. 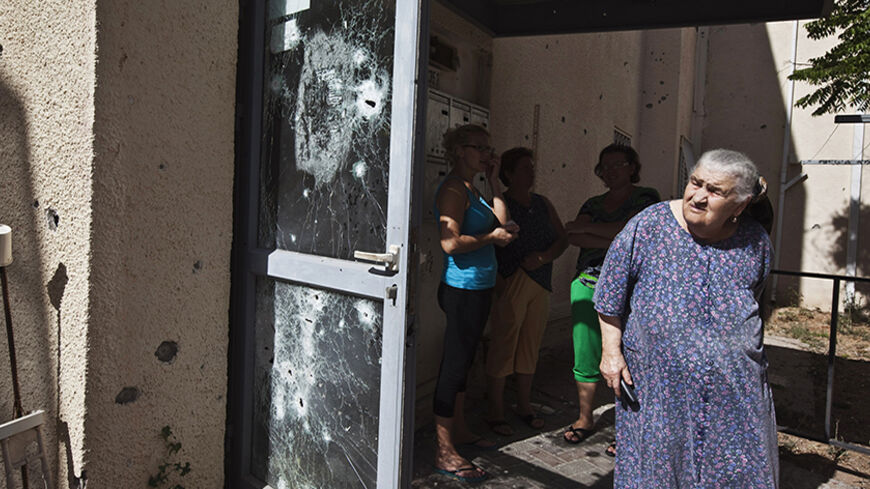 Israeli women stand near a building damaged after a rocket fired by Palestinian militants in Gaza landed in the southern town Sderot, July 15, 2014. - REUTERS/Nir Elias

In Sderot, it should take residents 15 seconds to get to a shelter from the moment the siren goes off. In Kibbutz Be’eri, adjacent to the Gaza Strip, they say it should take eight seconds. But these time limits are meaningless for, say, a 90-year-old old man unless he stays in a shelter around the clock. There is no way he can get to safety that quickly. Irma (her full name withheld for privacy reasons) works in a center for the elderly in Sderot. She tells Al-Monitor that when the alarm goes off, things get very difficult for everyone.

Many facilities for the elderly in communities surrounding the Gaza Strip have been closed during the war because they lack adequate protection, but Irma's facility remains open. Elderly residents are picked up every morning and transported to the center, where they stay until 1:30 p.m. During that time, they often deal with dozens of alarms. For people who have a hard time just getting out of a chair, running to a shelter every few minutes is not only dangerous, but frustrating.

“It’s risky for them,” says Irma, “and we are putting ourselves at risk by helping them, but we would never leave them alone, all on their own.”

One would think that the elderly of Sderot and the other towns and villages surrounding Gaza would be used to such situations by now, after spending so many long years with a constant threat hovering over them.

Orit Notman-Schwartz, head of the School of Social Work at Sapir College, wrote an article in 2009 claiming that elderly citizens who live along Israel’s southern line of conflict suffer less distress in the face of the rocket threat than other parts of the population. When she began a study on the topic, she had hypothesized that they would suffer more. What she found, however, was that even though 94% of the subjects she interviewed stated that they had first-hand experience with the threat, and 80% reported that they had personally seen Qassam rockets, only 13.5% of them were diagnosed with post-traumatic stress disorder. She observed that high levels of distress were recorded in just a quarter of them. Her article noted that the level of anxiety among the elderly was lower than the average among the adult population in general. Nevertheless, one of her many interesting findings was the significant divergence in her subjects. While the average was encouraging, some of her respondents showed rather extreme levels of anxiety.

Several conversations that Al-Monitor held with people providing therapeutic care to the elderly of Sderot suggested that manifestations of distress are much more severe in the current campaign. “Some of them are in a very bad state,” indicates Irma. It's possible that this has to do with the relatively high frequency of military clashes in the Gaza Strip and the surrounding area. While there are still elderly residents of the area surrounding Gaza who have shown remarkable immunity to the stress, some may be reaching a breaking point because of the endless rocket fire and the fear of an extensive military campaign taking place right next to their homes.

The situation of the elderly in the center of the country — the new front in the rocket war — is identical to that of the elderly in the south in how they deal physically with the crisis. For a healthy young person, there is a world of a difference between a warning time of 15 seconds and one of a whole minute. For the elderly, however, there is no real difference between eight seconds and a minute. In both cases they are faced with an impossible challenge. True, their situation may be better than that of people their own age across the Gaza border, who receive no warning of incoming bombs and who have no shelters or protected spaces, but in many cases, the elderly residents of Sderot, Gaza and Tel Aviv are forced to respond in the same way: They just sit and hope that they don’t get hit, without being able to do anything about it.

“The response time is unrealistic,” says Michal Levav, manager of social services at the Neve Amit Home for the Elderly in Rehovot, a town that has heard its share of sirens during the current operation, and seen quite a few rockets too. “Most of the residents are functionally immobile and require canes and walkers. Actually, what we really worry about is residents falling during the hurried rush to the shelter. We are mostly afraid of an extreme scenario in which 80 residents sit together in the dining room, and they all get up at once, heading to the protected space. That’s the really worrisome scenario.”

Despite their apparent helplessness, conversations with seniors in the center of the country seem to indicate that they have adopted the same attitudes hinted at in the aforementioned study. They display admirable resoluteness in the face of the new security situation that has interrupted their day-to-day lives.

A 90-year-old Holocaust survivor (name withheld) says that she doesn’t care about the rockets at all. “The only reason I go out to the stairwell [the most secure space in the absence of a reinforced shelter] is because my neighbors are worried about me. If I don’t go out there, they’ll think I didn’t hear the siren or that something happened to me,” she jokes. She adds that the care taker who lives with her is having a much harder time of it. She doesn’t respond as calmly to the sirens that wail across the city several times a day.

It turns out that many senior citizens adopt this same attitude. At the home in Rehovot, some of the residents refuse to even enter the shelter when the siren goes off. “Some of them tell me, ‘I don’t care, and I don't have the force to get up,’ or ‘Leave me alone now. I’m eating.’ We don’t force anyone who doesn’t want to go,” says Levav. She also notes that many of the residents in the home experienced World War II and the Holocaust, while others went through the War of Independence and the uncertainty in the early days of the State of Israel. Quite a few of them even experienced both.

“These are people who look to the future, instead of focusing on the past or the present. They are less worried about themselves than they are about their grandchildren and great-grandchildren,” she says. Quite a few macabre jokes are making the rounds of the home in Rehovot and the public parks of Tel Aviv. Elderly people have been heard to say, “I survived Hitler. Hamas really doesn’t scare me,” and “Even if I do get hit by a missile, it’s not like I’ll be dying young.”

And it goes further. Levav notes that the staff members at the home derive comfort and strength from their elderly wards. Older residents help the younger staff, explaining to them that the demon they face isn’t so bad. “They’ve been through the wars. They experienced some terrible things. Their perception of reality is very clear and level-headed,” says Levav. “This is especially true now in an emergency situation, but it is also true under normal, routine circumstances. This particular population is very encouraging and supportive, perhaps more supportive than any other group. They have the experience and also the tranquility that young people lack. They keep us strong.”

Homes for the elderly have made a point of giving clear instructions on how to keep track of their residents and care for them. In Neve Amit, for instance, there are four social workers who conduct regular inspections.

“They know the people who live here, and they are trained to identify those residents who have a lower threshold for anxiety. The staff is sensitive to the slightest shifts of mood. Until now we haven’t noticed any exceptional cases of anxiety,” says Levav, but she pointedly adds that this situation does not necessarily reflect the daily reality of elderly people living alone. “Here, we have a protected environment, which enables the elderly to live quietly and securely, and they respond accordingly.'' Care takers of the elderly hint that outside this protected living arrangement, the situation can be much more difficult, a lot scarier and a lot lonelier.