Against the grain: Israeli group calls for dialogue with Gaza

Members of the Other Voice organization fear the daily rockets from Gaza being fired over their homes, but also worry for the safety of their friends in Gaza, so they have called upon the Israeli leadership to find a long-lasting diplomatic solution. 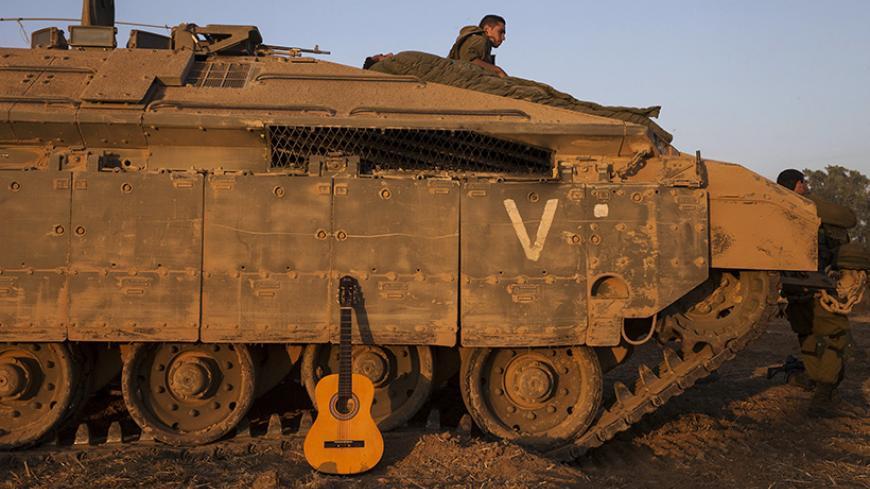 A guitar leans on an armored personnel carrier in Sderot, July 30, 2014. - REUTERS/Baz Ratner

Julia Chaitin addressed a crowd of thousands on July 26. “I find it hard to decide what to treat first,” she said, “the headache, the nausea, the stomach ache or the tears. I am aware that these are all symptoms of this war. … We, the Israelis and Palestinians, are falling into an abyss of war and vengeance. … Our bodies and souls are destroyed.”

The crowd at the demonstration, organized by an ad hoc coalition of peace organizations against Operation Protective Edge, listened sadly to Chaitin. “We, residents of the [southern] region in Israel and Gaza, know that our lives and security depend on each other. The only real way is to cease the fire, stop arming and seek a diplomatic solution that will benefit both people.”

Chaitin is a senior lecturer at Sapir College in Sderot and a resident of the kibbutz of Urim — two of the many places in the south of the country being targeted by incessant shelling from Gaza. She is also a leading member of Other Voice, an organization established in 2008 to “bring awareness to international, Israeli and Palestinian publics and decision-makers concerning the high physical and psychological toll that the violence has on Israelis and Gazans … concerning the need for achieving a nonviolent, political solution to the conflict.”

The organization maintains frequent and ongoing contacts with residents of Gaza by phone, text messages, emails, Facebook and Skype. In the rare case when a Gaza member comes to Israel — for instance, for medical treatment — they meet face to face.

On the Israeli scene, with an overwhelming majority of the public supporting the war, with the Israel Defense Forces (IDF) fighting to destroy the tunnels and rocket launchers that threaten the homes of Chaitin and her friends, and with radical, right-wing sentiment pervading the streets — the group’s voice is, indeed, different.

The 200 members of Other Voice reside in Qassam-stricken communities. Most live in Sderot, a town with a population of 24,000 located less than 4 kilometers (2.5 miles) from Gaza. The city has been awarded the dubious distinction of being Israel’s “Qassam capital” ever since 2001, when the Palestinian organizations in Gaza started firing rockets at the area. The residents of Sderot and surrounding communities along the Gaza border have lived through IDF operations and activities, including the 2008-2009 Operation Cast Lead and the 2012 Operation Pillar of Defense.

“I am scared all the time,” Chaitin admits in a phone conversation the day after the protest. “The tunnels scare me, the Qassams scare me, the incessant booms in the air, day and night, and the noise of shells and bombs landing — all this frightens me terribly. But I’m more scared to think that this is how we will live our whole lives if our leaders don’t understand that a diplomatic solution is required.”

On the roads leading into Sderot, artistically designed signs greet visitors, but recently, other signs have been hung. One urges “death to Arabs and to Jewish traitors.” Another, particularly large, says: “Let the IDF win and crush Hamas.” Mayor Alon Davidi called on the IDF to act with great force against the rockets. The former mayor, Eli Moyal, declared on his Facebook page: “The IDF has to come back with a scalp. … We did not send the IDF to bring back a cease-fire agreement. Terror must be crushed.”

Nomika Zion, a charismatic woman in her 50s, is sitting in her living room. “I can’t stand those signs,” she says. Zion heads the Yaakov Hazan Center for Social Justice at the Van Leer Jerusalem Institute. She is the granddaughter of Yaakov Hazan, the mythical leader of the kibbutz movement and of the now defunct Mapam Party. Zion, a member of Other Voice, came to Sderot in 1987 with an "urban Kibbutz communal group," whose members share their incomes, and has lived there since.

Despite the noise of the planes, the mortars and the bombs landing in Gaza, she maintains that today is a quiet day. Nonetheless, she makes sure I know where the shelter is located. In the rare moments of silence one can hear the wind chimes in her garden bells.

“I think these signs prove that we have become a society lacking in compassion, lacking in empathy. There’s a collection of more and more and again and again; more Qassams, more shelling of Gaza. An operation, again, and a war once again. Dead on both sides, again. And each time it’s more physically and mentally destructive. Our horizon only extends as far the next war,” she says.

She stays in touch through text messages and phone calls with friends and acquaintances in Gaza. “They don’t say they might die — they only talk about when they’ll die,” she says. “It might have been easier for me to choose to be blind to the suffering of the other, to go through these terrible days with a sense that we are totally justified. To be part of the warm consensus. But I chose to know people in Gaza, and I know that not all of them are Hamas. And I chose during such very difficult days to contain the pain of the other. And everything hurts.

“Hamas is a despicable organization — horrible, terrible, and not just toward us, but toward its own people. And the Qassams must be stopped and the tunnels must be destroyed — who knows this better than us? But we will not manage to do so with force, and all this violence is useless. What do we get out of it? What do they? Without a diplomatic agreement, which must be based on our withdrawal from the occupied territories, everything will remain the same.”

Zion’s neighbor, Yirmi Patishi, is also a member of Other Voice and of the so-called urban kibbutz. He is a tall, slim man, an educator and an animal-assisted therapist. “This war could have been avoided, and it must be stopped,” he says. “We can talk forever about who started, who’s to blame. But what then? … It’s hard for us now, frightening. We, too, are in danger. And we also have friends and sons serving in Gaza, whose lives are in danger. And Hamas is a terrible organization. But we have to talk.”

Michael (Micha) Ben-Hillel is a resident of the kibbutz of Nir Am, less than a kilometer from Gaza. On July 21, one of the first days of the operation, not far from his house, two teams of 10 terrorists emerged from two tunnels dug from Gaza into Israeli territories. The terrorists fired at an IDF squad and an officer, and four combatants were killed. The terrorists were eliminated before they could carry out a mass attack on the kibbutz, but the incident made clear to the Israeli public the threat lurking beneath the ground.

Ben-Hillel, too, is a member of Other Voice. “I don’t need convincing that the tunnels are a concrete threat,” he says in a telephone conversation. “Even now I’m in touch with friends in Gaza. And I’m convinced without a doubt: A solution achieved by force will not result in calm for long.”

In a small crowded cafe in Sderot, less than a kilometer from the houses of the urban kibbutz, a group of men sip coffee. They refuse to give their names but say they are unemployed. “Hamas must be crushed,” says one. The others nod.

One says he often goes up to a nearby hill to watch the IDF attacks on Gaza, a hill that the media has already dubbed pejoratively "Cinema Sderot." He says, "Every time I see a bomb fall on the heads of those terrorists, I’m happy."

And what do they think of Other Voice? One answers: “I don’t understand them. They contribute to Sderot, conduct education projects and do other good things, and they haven’t run away from here. But what, are they stupid? Mean?”

“Traitors,” someone else says.

Patishi is concerned by the swelling extremism. “I find it hard to identify today with the people I live with here in Sderot. Not all of them, of course. But some really do see us as traitors. There’s never a good time to object to war. When the fighters are in combat, we are accused of damaging their morale. And once the war is over, we are accused of disrespecting the dead.”

Members of Other Voice talk about the fear and the pain, about their loved ones who are fighting and their friends who suffer in Gaza, about the difficulty of not getting swept up in the harshness and extremism. Zion sums up: “I am not responsible for Hamas and that’s why I ask our leaders: Have you turned every stone to achieve calm? Have you done everything possible so that all of us, on both sides, can live in peace and security? This war doesn’t protect me. The only time in my life that I felt this country was truly protecting me was when a cease-fire was reached.”