Unlike Israel, which has warned Palestinian civilians to leave fighting zones, Hamas spent enormous resources building terror tunnels but neglected to build any shelters to defend the Gaza population. 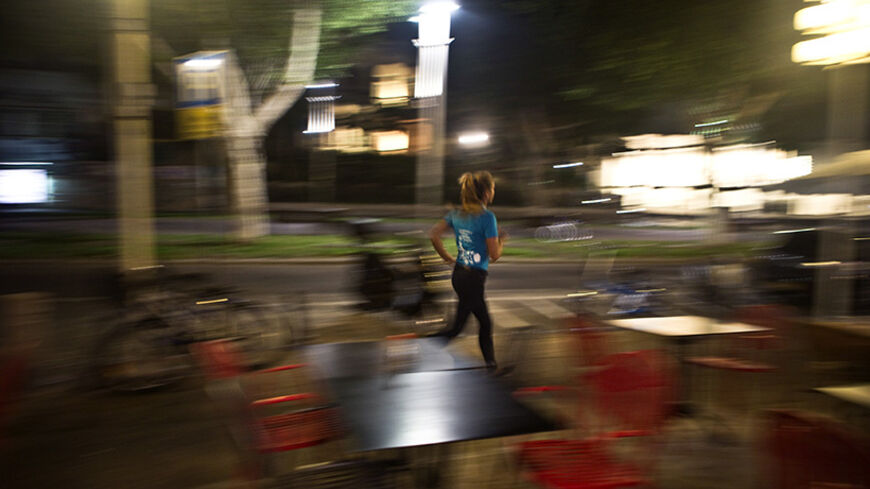 A woman runs for shelter in a nearby office building as an air raid siren sounds in a main street in Tel Aviv, July 11, 2014. - REUTERS/Nir Elias

On July 21 around 7 a.m., IDF soldiers hit the footpaths of Nir Am, a kibbutz located a few hundred meters from the Gaza Strip border. The soldiers passed through all the houses, knocked on every door and checked with the residents to make sure that everything was OK. They went to great efforts to check the alleyways, day care centers, hothouses and grounds of the entire kibbutz.

Meanwhile, the residents were instructed to lock themselves in their homes, bolt the doors and not open them to anyone. Half an hour earlier about 15 Hamas terrorists had appeared on the scene, dressed like IDF soldiers: the same uniforms, the same equipment. They emerged from a tunnel a few hundred meters away and ambushed the large IDF force that faced them. They succeeded in killing an officer, Lt. Col. Dolev Keidar of blessed memory, and three of his soldiers before the terrorists were eliminated by an aircraft, a tank and IDF infantry forces. Now, the mission was to check whether any terrorist had survived to infiltrate the kibbutz and carry out a terrorist act for bargaining purposes: to kill as many civilians as possible and try to abduct some to take back to Gaza through the same tunnel.

A TV photographer living in the kibbutz photographed these searches and stopped near one of the houses. Inside, behind the window, stood an elderly woman. She did not seem frightened — on the contrary. The photographer was well acquainted with the woman. She is a Holocaust survivor, a "graduate" of the Nazi death camps in Europe who immigrated to Israel, helped found the state and participated in the establishment of the kibbutz. And now, toward the end of her life, she finds herself hiding — again — from the horror of new, fresh forces who have decided to kill her.

“Take care of yourselves,” she told the soldiers, “Thirteen IDF soldiers were killed, all of them are my sons,” she added.

On the morning of July 21, the IDF casualty count totaled 13 slain soldiers. On the next morning, it reached 25. The army hemorrhages blood but so far, it has succeeded in blocking the wave of infiltrations into Israel through the terror tunnels. These tunnels were dug over the course of years under our very noses and extend from inside of Gaza, mainly the Shajaiya neighborhood, to access thriving, full-of-life Israeli villages.

By the way, all of these villages are located within the well-known, international Green Line borders of Israel. Let me remind anyone who might have forgotten: Israel left every last inch of Gaza in July/August 2005 as part of the disengagement. This was the late Prime Minister Ariel Sharon’s intriguing experiment that failed. Israel left in order to extend its hand in peace, and examine what happens with the Palestinians when they are liberated. And indeed, since then they have accumulated 8,000 rockets of all ranges, including the radius of Tel Aviv; they have dug dozens of tunnels to facilitate acts of terror (to date, 25 terror tunnels have been found, of which Hamas has already used five to attempt to enter Israel, each time foiled). They established a navy and a small fleet of mini, remotely piloted vehicles. They have become a trained, hate-filled murder machine that prepared 25,000 jihad fighters yearning for the opportunity to carry out suicide bombings on the State of Israel’s southern fence. But the main thing is that US Secretary of State John Kerry announced that he is coming to the region to "spare innocent civilians."

Lt. Col. Dolev Keidar was part of the IDF command’s crème de la crème. He assumed his last position, in which he was killed, only a week ago: infantry battalion commander in the IDF’s prestigious officer training school of international repute. On Monday morning, a few hours after the incident, I patrolled the area with another officer, a brigadier general. This officer had been a veteran brother-in-arms to Keidar. The sector patrol we took was really the general’s personal scouting mission in the footsteps of his slain friend. The previous evening, Sunday, the two met by chance on the site in which the terrorist act took place the following morning. Keidar told the high-ranking officer that he planned on stay outside in the field that night, with his soldiers.

“There is an alert that they will try again to infiltrate through some tunnel during the night,” said Keidar. “I’m planning on remaining here. We can’t allow them a successful infiltration into an Israeli village.”

It was around 6:30 a.m. when they came. Keidar and his soldiers were the first to confront them. “I know what he was thinking afterward,” said the senior officer, his eyes misting. “He told himself, ‘It’s either me or Nir Am. We are the only ones who stand between these murderers and the kibbutz.’ That’s why he stormed on. That was Dolev.”

Israel is now sobering up. We must hope that the world will also go through the same sobering process, though it may already be a little too late. The entire region is awash with Hamas-type organizations. The Islamic State is dismantling Iraq and Syria while conducting mass slaughter of Shiites only because they are Shiites. Ansar Bayt al-Maqdis is ruining the Sinai Peninsula while Jabhat al-Nusra is burning up Syria. Next to them is the Islamic Jihad, with whom we are already well acquainted, with the addition of local Salafist organizations such as the Popular Resistance Committees in Gaza. What characterizes these groups is that each time a new movement pops up, it is more extreme, murderous and bloodthirsty than its predecessors.

A few weeks ago, even before the current cycle of violence began (as a reminder, the current round of violence was fueled by the abduction and murder of three Israeli youths in the Etzion settlement bloc), I attended a background briefing by the head of the Southern Command, Gen. Sami Turgeman. Those were relatively quiet days. Rocket fire from Gaza was the usual dribble, to which hundreds of thousands of residents of the environs had become accustomed over more than 10 years. Here a Qassam, there a Grad rocket, occasionally a few mortars. These were launched for no particular reason, of course, just for the hell of it. An entire generation of Israeli children grew up there, in the Gaza Envelope villages, where they never knew a truly quiet life — life that did not require maintaining a constant state of readiness to run like crazy to a protected space. They were born after these recurrent cycles of violence started.

Turgeman told me about the tremendous resources invested by Hamas in its attempts to fortify itself. He talked about tunnels. He said that thousands of Gaza residents are, at any given moment, digging a giant network of tunnels enabling them to enter Israel, bypassing the IDF. The goal is to perpetrate as many civilian murders and massacres as they can, and if possible to abduct Israelis and bring them to the Strip. The Gazans know very well that Israel’s weak spot is kidnapped soldiers or civilians, and they do everything to obtain them.

Turgeman described a harsh reality. One day, he said, it will explode in our faces. And that is exactly what happened two weeks ago. Hamas was revealed as a mini superpower that swelled up on our border with tens of thousands of fighters, an underground city below Gaza and cavities and tunnels that extend underground over scores of kilometers. These tunnels allow senior Hamas figures to live secure, comfortable lives while their exhausted civilians remain aboveground. Hamas, unlike Israel, does not build shelters or protected spaces for its civilians. Throughout all of Gaza there is no awareness of civil protection, and for good reason. In Gaza, the civilians are the human shields for the rockets launched at Israel. When the IDF warns the civilians and asks them to vacate a specific region that they intend to attack, Hamas forces them to remain. Not long ago, 20 rockets were discovered in one of UNRWA’s elementary schools. This is the reality that Israel faces, the reality in which it must function. While the world does not yet understand this, it is on its way to comprehending it. Unfortunately, this road will be long and difficult.