When the Gaza operation ends, Prime Minister Benjamin Netanyahu will have to justify his national defense priorities, as he relentlessly pushed the budget for funds against the Iranian nuclear threat while ignoring the tunnels Hamas was digging under Israel that threatened the residents of the south. 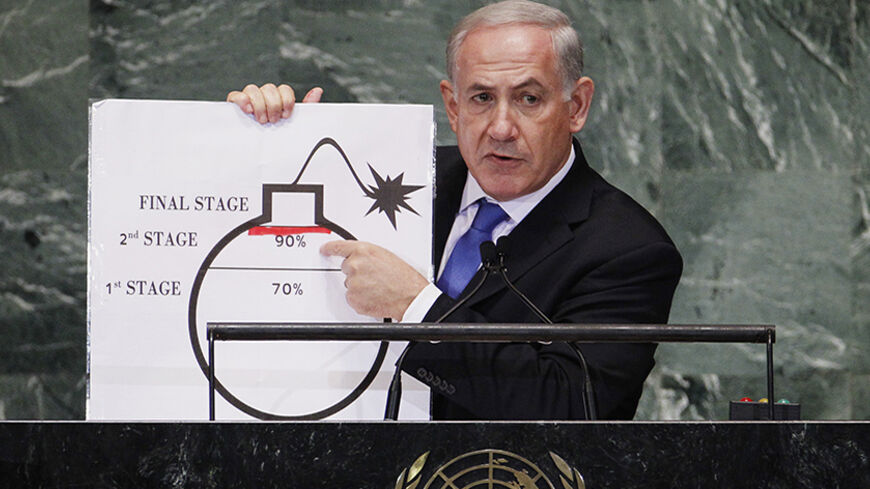 Israel's Prime Minister Benjamin Netanyahu points to a red line he has drawn on a graphic of a bomb used to represent Iran's nuclear program as he addresses the 67th United Nations General Assembly in New York, Sep. 27, 2012. - REUTERS/Lucas Jackson

When the fighting in Gaza draws to a close, people will certainly demand an investigation into what already appears to be a significant intelligence, military and diplomatic fiasco, or multisystem failure, on Israel's part. It is already clear that Israel did not prepare itself against the threat of the tunnels, dug by Hamas over many years, under the villages in Israel’s south.

My colleague Ben Caspit wrote July 24 in Al-Monitor that a national commission of inquiry should be established to investigate the resounding failure of Israel’s intelligence apparatus. Was it a military failure, or did Israel know (at least in general) about Hamas’ tunnel enterprise and the dangers it posed to the lives of Israel’s southern residents?

According to defense sources, Israel had for years had access to all the indications and proof that Hamas was conducting widespread, comprehensive digging work along the border. Aircraft from the Israel Defense Forces (IDF) spotted digging and attempts to hide the removal of tremendous quantities of soil from the bowels of the earth in the relevant areas.

The defense establishment had more than clues and conjecture to go on. A tunnel from Gaza to Israel was unearthed in March. In October 2013, the IDF had uncovered a tunnel near Kibbutz Ein Hashlosha.

In an interview with Al-Monitor, Efraim Barel, a resident of Nirim village, said that the residents of villages the length of the border with Gaza not only heard and sensed the excavations underway beneath their homes, but even uncovered tunnels in their areas. According to Barel and others, the IDF did nothing about it.

“For years, the residents heard noises,” Barel said. “One Friday, I was lying on the couch and heard loud knocking, boom-boom-boom. I really felt it from under the sofa. My dog started to bark, to go crazy. The army came. They were by me under the house for three days. They asked questions, brought all kinds of instruments to hear noises, and that was the end of it. Later on, there was flooding in the area and then one of the tunnels was exposed. Evidently, that was the tunnel I had heard being dug under my house.”

The tunnel was revealed in the Ein Hashlosha area, the same region infiltrated by Hamas terrorists during the course of Operation Protective Edge. The attempted tunnel attack failed, but led to the start of the ground attack stage of the operation. At this point, all the objectives of the operation changed — from the original goal of stopping the rocket threat to Israel to destroying Hamas’ tunnel configuration. It was likely that had Hamas leaders accepted Egypt’s proposed cease-fire deal, the ground operation never would have taken place, and the tunnel enterprise would have continued to progress and threaten the residents of the south.

In a July 24 interview with Channel 10, Communications Minister Gilad Erdan was asked if Israel had known the true scope of the Hamas tunnels. Erdan answered in the affirmative. Why, then, had nothing been done? asked the interviewer, Oshrat Kotler. Erdan’s answer was evasive, but one could surmise from his words that the Gaza tunnels did not head Israel’s list of priorities. So what was Israel’s top priority?

For years, Prime Minister Benjamin Netanyahu funneled all his energies and hundreds of millions of defense system dollars into a war against Iran’s nuclear project. Israelis heard at every possible opportunity that Iran threatened the existence of their country. According to foreign sources, Israel undertook serious preparations for an aerial attack on Iran’s nuclear facilities.

In its preparations against Iran, Israel allotted hundreds of millions of dollars, but did nothing to find preventive solutions for the residents of the south. In a series of articles published by Aluf Benn about a year ago, the Haaretz editor revealed the price of the Iranian obsession to the Israeli taxpayer. From this, one can also deduce the tunnel failure that became evident in the course of the Gaza operation.

According to data from the Finance Ministry in 2012, the secret services budget (included in the general reserves of the state budget) amounted to more than NIS 6 billion ($1.75 billion), with a commitment to increase it by another NIS 1.75 billion (about half a billion dollars). The entire defense system was required to gear up for a possible confrontation with Iran, including directing resources to intelligence gathering.

Thus, just when Israel concentrated its greatest efforts and resources on the Islamic Republic, Hamas initiated its massive tunnel enterprise. While the tunnel threat does not compare to a nuclear attack on Israel, it turned out that the dangers posed by the tunnels were much more tangible and concrete.

Hamas activists taken prisoner during Operation Protective Edge told their Shin Bet interrogators about a terrifying plan to send hundreds of suicide fighters via the Gaza tunnels on Jewish new year's eve, September 2014, for a murder and abduction spree in the villages and kibbutzim of the south. Defense sources even assessed that if the plan had been carried out, the catastrophe would have been on the same scale as the 1973 Yom Kippur War.

Barel was photographed a few months ago near the shaft of the tunnel that was uncovered in his village’s agricultural area. The photo clearly shows the opening of the tunnel and the concrete walls meant to support the sides. (These walls collapsed due to the flooding.) Mainly, however, the photograph is testimony to the blindness of the defense system.

Said Barel, “The Ein Hashlosha residents themselves began to pour water into the tunnel, in an attempt to destroy it and lessen the threat it represented. The army only came afterwards. Until this day, this tunnel stands exposed.”

Before Israel withdrew from the Philadelphi Corridor (the length of the Gaza-Egypt border), it built a steel wall with foundations deep in the ground. This measure along the corridor was meant to stop tunnel digging into Egypt. At a depth of more than seven meters, a narrow strip was dug, into which steel bands were inserted. This was meant to block the underground passage to Egypt that Hamas had tried to use. At the time, the IDF considered digging a deep water ditch along the border, to disrupt the digging and cause the tunnels to collapse. Although planning was in the advanced stages, the ditch idea was ultimately abandoned because the IDF retreated from the Philadelphi Corridor after the disengagement from the Gaza Strip.

Another proposal, to create a water ditch to prevent tunneling along the Israel-Gaza border, was raised a decade ago by two professors. Yossef Hatzor, chairman of Ben Gurion University’s Department of Geological and Environmental Sciences, and his colleague Haim Gvirtzman, a senior geologist at the Hebrew University, approached Israel’s defense establishment. They recommended creating a water ditch so that any tunnel dug by Hamas activists would collapse. The recommendations they submitted passed from hand to hand in the defense system, only to be buried deep under paperwork.

Other proposals were also submitted, such as those for sensors, radar and UAVs (unmanned air vehicle systems) to patrol relevant areas and use laser beams to map the topography. None of these were ever implemented. Israel did not view the tunnels as a high-priority national problem, and the threat faced by the residents of the south did not head its list of priorities.

A commission of inquiry, should it be established, will have to answer the following questions: Why were the voices of the Nirim and Ein Hashlosha residents ignored? Why did the defense establishment close its eyes, ears and purse strings? The main question to be asked by a commission is this: Why, despite Israel’s intelligence capabilities, was a mass attack — which according to senior defense leaders would have brought Israel to its knees — only averted somewhat miraculously?