Ben Kfir, who lost his daughter in a 2003 terror attack, recounts to Al-Monitor his efforts at explaining to Israelis that only a diplomatic agreement will end the violence: “The infrastructure of terrorism is poverty, ignorance, despair and hopelessness.” 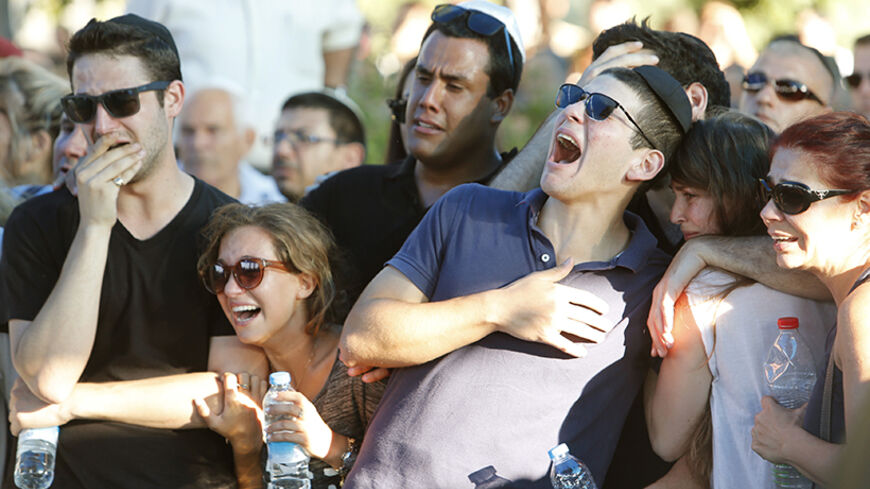 Israelis mourn the death of a soldier in Rishon Lezion, near Tel Aviv, July 31, 2014. - REUTERS/Nir Elias

It’s quiet in the home of Ben Kfir in northern Ashkelon, which stands along the first row of houses across from the beach. Its wooden balcony overlooks the Mediterranean. “Wait until there’s a siren and you start to run,” Kfir says, explaining that the house is located in the center of a triangle of rocket strikes: “Pieces of Iron Dome [air defense system missiles] fell on the fence of a house to the north of here and destroyed it. A rocket landed to the south of here and destroyed a garden and the wall of a house. To the east, a rocket hit a supermarket. I sit on the balcony and count the rockets heading for Ashdod [some 10 kilometers (6.2 miles) to the north]. Sometimes they’re so close you can read their serial number.” He speaks calmly, but he’s the last person to accept the Gaza rocket threat as a heavenly decree. He refuses to sit by helplessly.

Kfir has already been dealt a terrible blow by the Israeli-Palestinian conflict. A Hamas suicide bomber murdered his daughter Yael in an attack near the Tzrifin military base in 2003. A bereaved father living 16 kilometers (10 miles) from the Gaza Strip, in a Qassam-stricken town, he took the stage on the night of July 26 at the Rabin Square rally and said, “Our prime minister never misses an opportunity to stand in front of every microphone and say that the terror infrastructure must be destroyed, and I certainly agree with him. But I believe that Hamas is not the infrastructure of terrorism. The infrastructure is poverty, ignorance, hopelessness, despair and the basic absence of security. These are not things the IDF [Israel Defense Forces] can handle, and as my 8-year-old granddaughter says, 'One doesn’t put out fire with fire.'”

He talks with heartbreaking yearning for his 21-year-old daughter who was murdered with her entire future ahead of her. He describes how he thought of murdering Palestinian laborers at a nearby construction site in revenge, but understood that the circle of violence was not the answer. The search for a different solution led Kfir to The Parents Circle Families Forum, an organization of some 600 Israeli and Palestinian families all of which have lost first-degree relatives as a result of the conflict. “The encounter with this group gave meaning to my life, and our joint work is what gives me strength to get out of bed in the morning. We have one goal — to prevent additional bereavement on both sides,” he says.

Al-Monitor:  Do you not despair?

Kfir:  No. Any student of history knows that France and Germany slaughtered each other from the end of the 13th century until the end of World War II, and today they are the two cornerstones of the European Union. We have all read about Ireland, South Africa — conflicts that lasted hundreds of years, at the end of which a leadership arose that managed to resolve them. If you have no hope that the same thing will happen here, and think that we shall live by our swords forever, you have to be sure of two things: that there is enough room in the cemeteries for all those we will bury there in the future, and that there is a rope that you can hang yourself with, if you are in such despair.

Two peoples live between the Jordan River and the Mediterranean, and neither will give up. We will not hand over our keys and move to New York, and by the same token the Palestinians will not pack up and leave. We share the same land and what lies underneath, the graves of our children.

Al-Monitor:  There are no families of terrorists in the organization of bereaved families.

Kfir:  True, but there are many who did jail time, and not for handing out flowers. They were members of terror groups, they threw stones, fire bombs, took part in demonstrations and used live fire — and then came to the conclusion that this was not the way; that continuing to shoot at us and kill us will not solve a thing.

They are faced by the IDF — of which I'm proud — one of the strongest armies in the world. We will not be expelled by force. Nothing will be achieved by force. No conflict in history, except perhaps World War II, ended in force. It always ended through dialogue. There are about 1.7 million people in Gaza, of whom only several tens of thousands are Hamas members, and the rest are citizens who, like us, want to make a living and grow old in serenity.

Al-Monitor:  Many Israelis feel that all of Gaza’s inhabitants are terrorists.

Kfir:  What nonsense. The forum members may not be happy to hear, but I'm sitting here, in the triangle I described earlier, and I'm being fired on from every direction by people who want to kill me, and I have no doubt that anyone who wants to kill me should be targeted. I have no pity for someone who wants to kill me. But where is our leadership that should talk to the ones on the other side who don’t want to kill me? They [in Gaza] have many people with the same goal — a goal shared by me, by [Prime Minister Benjamin] Netanyahu, by them — to live in peace.

Kfir:  I don’t know. He declared “two states for two people,” and he has done everything possible to undermine it. Judging by his deeds, it doesn’t look like he does. I don’t have any hopes of Netanyahu, either. Peace will come on the day that both sides, at the same time, have very strong leaders who will sit at a table to talk and compromise and will then sign a peace agreement. Each will have to be strong enough to impose this peace agreement on those among his people who don’t want peace. Right now it won’t happen, because both [Palestinian President] Mahmoud Abbas and Netanyahu are weak leaders. I never heard anyone say that the Security Cabinet is convening to discuss the face of the Middle East 50 years from now and how we have to act now to get there. The sentence I keep hearing is, “The Cabinet will convene to discuss ways to respond.” We were attacked? Now, let's hit back. That’s not leadership. Leadership thinks ahead, not backward.

Al-Monitor:  Given the leadership's weakness, as we talk, a military operation is the right move for the present situation.

Kfir:  In my speech, I didn’t say a thing about stopping the war. The business with the tunnels is mind-blowing. It’s not logical. I have no doubt that they must be destroyed. I don’t care about the 300-400 Hamas combatants who were killed, because all they wanted was to kill me in the most fanatic way possible. But there were hundreds of other people killed there, and I really feel sorry for them. And I also know they will harbor hatred for us. By our own deeds we are raising the next generation of Hamas activists.

Al-Monitor:  Your views make some Israelis mad, both on the right and the left.

Kfir:  People are mad at me, of course. The forum set up a tent at the Cinematheque Square in Tel Aviv and for the past 20 days we have been conducting a discourse there. Last Tuesday [July 22], I went there and this big guy stood in front of me and said, “May you get cancer in your head and may a rocket fall on your head.” I replied, “I’ve already had a rocket fall on my head, in 2003. Who are you to shut me up?” The left wing is angry, too, when I say, “If someone comes to kill you, arise and kill him first [Sanhedrin 72a].” I am not willing to be a sitting duck on my balcony and wait to be killed.

Al-Monitor:  The tragedy you endured and the fact that you live in Ashkelon gives you a kind of “honesty citizen proof” vis-a-vis the Israelis, enhancing your right to express such views?

Kfir:  I’m sure there are some who think that I don’t know what I’m talking about. But in Israeli society, as well as in Palestinian society, there is a measure of awe for bereaved families. They are respected. There are many people around the country who are sure that not only have I lost my daughter, but also my sanity. No one says it to my face, but they don’t understand how a man who lost his daughter at the hands of a Palestinian can talk to a Palestinian. So if I can sit down and talk to a bereaved Palestinian mother, anyone can. The fact that you’re scared, and refuse to recognize the fact that those on the other side are also human beings, is something else. But that’s your problem, not mine.

Kfir:  I am active in “The Road to Recovery,” an NGO that enlists volunteers to drive Palestinians from the Erez crossing [from Gaza] to Israeli hospitals. I talk to them on the drive, and I tell you — they want peace. Many of them are simply afraid to talk. During another campaign we launched at the forum, we published a phone number in Israel and Palestine that enabled Palestinians and Israelis to talk to each other. In the two years that the campaign ran 1.8 million conversations took place. People are dying to talk, they don’t have the means. All our projects are designed to provide both sides with an opportunity to meet and talk, because the minute you talk, you learn to know the other side and to fear him less. The aim is to reach a mass in favor of reconciliation, which the leaders will not be able to ignore.

Al-Monitor:  You speak at high schools. What do you think is the attitude of Israel’s youth to the situation?

Kfir:  I come to the classroom with a Palestinian member of the forum. It turns out that for 99% of the class, it’s the first time they’ve seen a Palestinian in person, not on television. Suddenly, they understand that the Palestinian is a human being. They’re stunned. Then they ask me, “So, should I not enlist in the army?” And I answer, “What? Are you nuts? We need a strong army. Without one we will all be slaughtered. But when you stand at a checkpoint, bring with you the human being you are.” Because when you stop a person at a checkpoint in the sun, for four hours, for no reason, you create an Israel-hater. And when you publicly strip a grandfather with his grandson standing next to him and seeing how his granddad is being insulted, you are raising a potential terrorist. You’re a soldier, but you’re also a human being.

Al-Monitor:  And they listen?

Kfir:  Of course. Not everyone. But a while ago I drove into a gas station and the guy at the pump told me I looked familiar. Turns out I gave a lecture at his school six years ago. I asked him, “So what did you do with what you heard?” And he answered, “I carried the lecture with me on my back for three years [of military service].” And at that moment I felt that despite being a volunteer, I had been paid in full.