The Impossible Conversation Between Netanyahu and Obama

Ben Caspit describes what the meeting between Prime Minister Benjamin Netanyahu and President Barack Obama would look like, if only they were telling each other the naked truth. 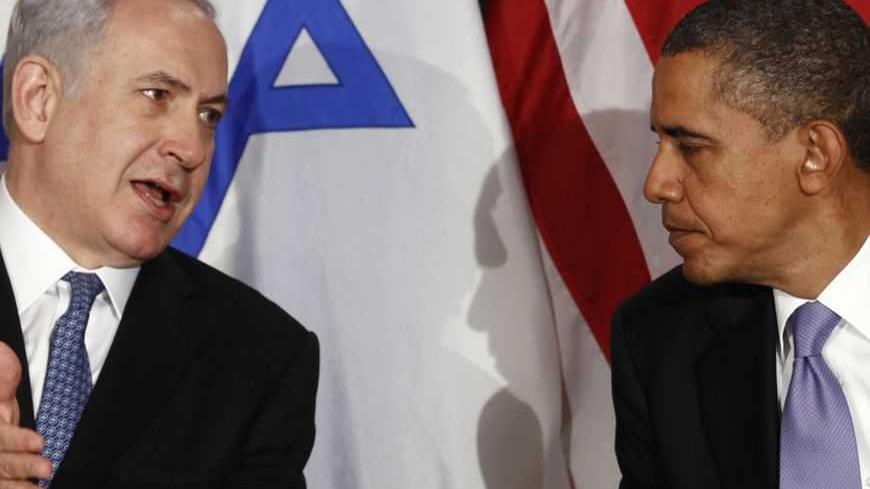 President Barack Obama and Prime Minister Benjamin Netanyahu will have a face-to-face meeting next week. Once the professional topics have been fully covered and each side has read their respective shopping lists and insights (chiefly in connection with the Iranian issue), the chiefs of staff, the advisors and the aides will be given a slight hint to leave the room. [Prime Minister Netanyahu] Bibi and Obama will be left alone.

This tête-à-tête is the main and most important part of the meetings between leaders. It is at this intimate parley that a relationship is fostered, and trust and chemistry are created. When the ingredients are there, such a talk can be effective, focused and perhaps even historic. This was the case between Prime Minister Yitzhak Rabin and President Bill Clinton, and Prime Ministers Sharon and Olmert and President George Bush. In this intimate atmosphere, the president can briefly lean forward to the prime minister, put a hand on his shoulder and ask: Tell me, Yitzhak (or Ariel or Ehud), what's the 'red line'? Where do you draw your line? How far are you willing to go? How do you see the comprehensive solution, and what's your end game? Let's be honest, just between the two of us, what will it really take for you to strike in Iran?

When it comes to Obama and Netanyahu, there's a problem.

Firstly, there isn't an iota of trust between them. Secondly, in such settings Netanyahu has a tendency to sell his interlocutor pipedreams, and then a second later do the exact opposite. In this piece, I will describe what Obama would have really told Netanyahu at their tête-à-tête meeting had he decided to say what's really in his heart, and what Netanyahu would have truly replied had he decided, for a change, to speak nothing but the truth. This is the alternative, imaginary and very politically incorrect conversation that would have taken place between the president and the prime minister in a utopic world that doesn't exist and never will.

Obama: Listen Bibi, let's cut to the chase. You know I can't stand you. I was caught red-handed saying this to French President Nicolas Sarkozy at the Élysée Palace. There's no point hiding the bad blood between us. I think you're hurting Israel's interests on the one hand, and being disrespectful of what America does for you on the other. You also have a tendency not to tell the truth. And yet when it comes to you and me, the picture is much larger than the both of us. We have Israel and the United States of America. I'm willing to think of it as water under the bridge and turn over a new leaf. You saw the interview I gave Yonit Levy [on Israel's Channel 2] in which I was forced to deny what I had said about you after you stupidly gambled on Mitt Romney and imperiled your country's most vital interests. I suggest you also let bygones be bygones. I'm on my second and last term. You're already on your third, and if you go on the way you are, it'll be your last one, too. You used to think that I was trying to take you down. Hopefully by now you realize that that's not the case. You're doing a good job of it yourself. Even your own people explained to you in the last election what they think of you and your policy. So let's decide together what we will do over the next four years; let's draw up a plan.

Netanyahu: I appreciate your candor, Barack. In fact, allow me not to call you by that name. It makes me long for my better days with Ehud [Barak — the outgoing defense minister]. Mr. President, more than anyone else, I want to put it all behind us. You must understand that I had no choice with Romney. Sheldon [Adelson, the casino billionaire, owner of an Israeli daily newspaper] would have killed me. He was up to the neck with investments, hundreds of millions. Trust me, compared to what they wanted me to do for the Republican campaign, I hardly did anything. You must understand, I have constraints here too. You are the president of the United States. What are they going to do to you? Here in Israel, it's a totally different ball game. This is a small, besieged country, surrounded by enemies, and the prime minister is isolated, surrounded by evildoers who plot to unseat him. It's not easy. Without Adelson, the media would have swallowed me alive. But let's think ahead. I took a blow in the election, that's true. The people were carried away by poster boys and news anchors that haven't doctored a single spin in their life. I understand that if I don't get my act together, I won't get another chance. But you must understand something: from my standpoint, the Iranian topic takes precedence over anything else.  Give me Iran and I'll give you the sun, the moon and the stars.

Obama: I didn’t ask for the moon or the sun, Bibi. What I asked was that you freeze construction in the settlements and on every hilltop, and that you stop destroying the last chance for a solution. What I asked is that you rein in your rampaging right and give the world some consideration. What I asked is that you realize that you can't always have the upper hand and that America cannot always stand by your side and help you when you don't help yourselves. If I've told you once I've told you a thousand times, I got the Iranian issue covered. I have no intention of backing down. I don't cheat and I don't bluff. I can't let those ayatollahs build nuclear weapons on my watch, allowing them to become the mad turbocharged version of North Korea. You must take it easy with this issue and stop the madness. We all know about the Jewish Holocaust. It was the biggest crime against humanity since the Creation. It won't happen again, there's no way.

Netanyahu: Mr. President, it's easy for you to say when you're from Washington. With you guys, when your term in office is over you retire. You get a presidential library and divide your peaceful life between the private ranch and the luxury condo in Manhattan. In Israel, no one ever retires, and even if you're forced to retire, you continue to live in this sticky pressure cooker known as the state of Israel while planning your own comeback. Our prime minister barely has a big single-family house in [the upscale community of] Caesarea and maybe some luxury apartment in Jerusalem. And they're all within the range of Iran's nuclear missiles and the rockets of Hamas and Hezbollah too.

Obama: So in this day and age, when rockets are anywhere, why do you insist on keeping every hill and every post in the West Bank? You're an intelligent man, Bibi. You can read the map and understand the world. You know we live in the cyber era. Wars are won over the Internet. It's much more important that you have a good missile interception system, advanced cyber warfare capabilities, an army of skilled hackers, and a superpower that has your back with all its aircraft carriers. Instead, you continue to build settlements such as Itamar C, and treat every illegal outpost as the bedrock of the revival of the Jewish people. At this rate, you'll find yourself all alone.

Netanyahu: Mr. President, try to see my side too. The people who live in those outposts are the people who vote for me. They're my electoral base. There's already 400,000 of them. It's more than 5% of the population. They're everywhere. They can be very violent. They're messianic and extreme. For years I've been trying to get them off my back, but can't. The people of Israel are tired of the grotesque idea of peace. Look what's going on around us. Everything's on fire; it's all falling apart. The Muslims are killing each other over nothing. Who do you want us to talk to? Who do you want us to sign agreements with? With rulers that are here today and gone tomorrow in some cage or musty dungeon in the desert? The Palestinians, who are so well spoken at the UN, in the end — they're all Hamas. What they want is for us not to be here. They want us to go back to where we came from. Go explain to them that we are in our homeland. What we have here is a collision between two worldviews, Mr. President, between two civilizations, the liberal West, which is you and us, and the radical Islam, which is them.

Obama: The liberal West? You just told me about your violent, messianic settlers. That's the liberal West? Be careful not to become too much like them, like the Muslims you so despise, Bibi. You may not have noticed this, but you're becoming more like them by the minute. Even the attitude of your radical elements toward women reminds me of what they do to women in Saudi Arabia and Iran. Hillary Clinton talked about it last year.

Netanyahu: That's true, but the recent elections have shown that the Israeli people aren't there yet; they're more sober and intelligent than we gave them credit for, or at least the credit I gave them. Let it go, Barack. Oh, excuse me, Mr. President. Let's try to seal a deal. I'll get you what you need if you clinch this Iranian thing.

Obama: First of all, this time I want assurances to your promises. I believed you enough. You will sign the papers, and for all I care, Yaakov Ne'eman, your attorney, can witness the signing. And secondly, let me tell you, Iran is on me. I got it covered. They have one more year before becoming nuclear. America isn't Israel. We can stop it even at the bottom of the ninth inning. I have no intention of blinking and then leave you before a fait accompli.

Netanyahu: That's exactly what I'm afraid of. I'm afraid that you'll go almost the whole hog, but not quite, until it's too late. By then we won't be able to take any action and they will be totally immune. Maybe you should sign up some papers too, what do you say? Shall I call Yaakov Ne'eman in?

Obama: Ok, forget the papers, no signatures. Count on me, that's it.

Netanyahu: What choices do I have?