The destructive hatred of Hamas

The rule of Hamas, based on hate toward Israel rather than on rebuilding the Gaza Strip, is at the root of the miseries suffered by Gaza residents, both adults and children. 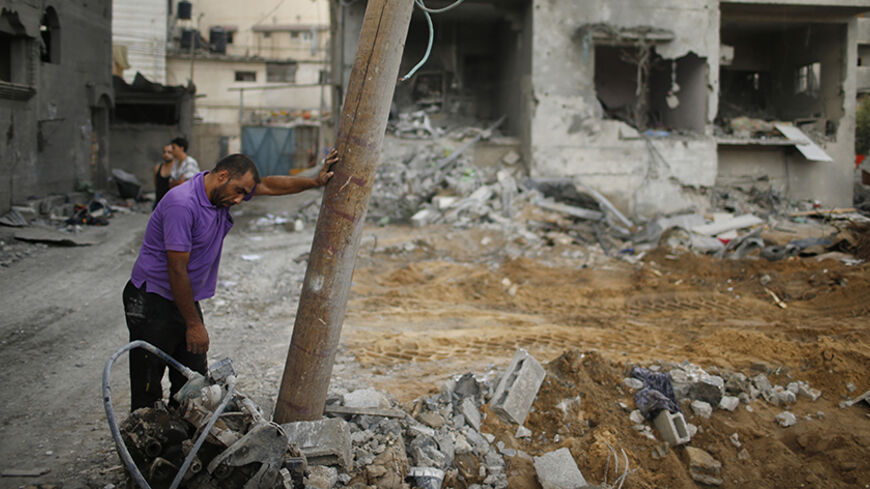 A Palestinian man reacts next to the rubble of a house destroyed in an Israeli airstrike in Gaza City, July 13, 2014. - REUTERS/Mohammed Salem

Shalom to you, anonymous Palestinian girl.

I don't know your name. I'm almost certain that as I was writing this letter to you on July 15, you were no longer alive. The night of July 12, I received a photo of you. In fact, it was a long series of photos, which, sadly, arrived to my cell phone via WhatsApp. As someone who's lived in the Middle East for half a century and has been through several wars, I'm used to seeing gruesome photos. That's part of our life here. But yours was different. One photo that is worth 1,000 missiles. I looked at it, mesmerized by the human suffering unfolding before my eyes. Eventually I ended up deleting it from my mobile phone. I tried to forget and delete your photo from my own memory. I couldn't. That night, I barely slept a wink. The image of you lying on the operating table in a hospital in Gaza gave me no respite.

I saw the white-gloved hand of a physician over your body. Another hand was putting a resuscitation mask over your mouth. You were 5, maybe 6 — the same age of another girl, my daughter, who, at the exact same time, was sleeping soundly and peacefully in her room. One meter and a wall separated her from her dad, who was staring at you in horror. During those moments my daughter was probably having sweet dreams. What were you dreaming about? What can you possibly dream about in this situation?

One of your arms was gone. It was probably severed when the bomb, which was dropped on the house of Hamas police commissioner in Gaza Tayisr al-Batash, exploded. Your body was covered in blood. Your intestines, almost all of them, were dangling by your side. Your body sustained other injuries and I have no idea if you were still alive when that photo was taken. But if you were, how many hours or minutes did you have before your heart stopped beating? I am not a doctor, but I'm pretty sure that it's impossible to overcome such serious wounds. And if you did survive, what kind of life awaits you the day after?

My first instinct, anonymous Palestinian girl, was to ask for your forgiveness. I belong to the people whose prime minister, along with his Cabinet, ordered the Israel Defense Forces (IDF) and the air force to launch Operation Protective Edge in Gaza. This chain of events ultimately led to the bomb that was probably dropped from an F-16 warplane on the house where you were staying and from whose rubble you were extracted. So I ask for forgiveness. In principle. But there are also other questions at hand — moral, political and historical ones. These are questions that make sense. And it's about them that I'd like to talk to you.

What should take place so that girls like you, throughout Gaza, will stop living in fear of these bombs? What should be done, who should be convinced, who should be paid and who should we talk to so that the IDF, which is considered the strongest and most sophisticated military in the Middle East, perhaps also one of the best in the world, would let go of children like you?

Well, dear Palestinian girl, there's one little thing that can put an end to this and spare us all from this fate. Unfortunately, this won't change your fate, but it can solve the plight of tens of thousands of other little girls. What needs to be done is simply to stop firing rockets at Israel's communities. I don't think you were born when Israel decided to evict the Gaza Strip and uproot the dozens of thriving Israeli communities there. In 2005, then-Israeli Prime Minister Ariel Sharon carried out the "disengagement." Israel pulled out of Gaza — down to the last inch. Here in Israel, we had hoped that this would be the first move toward building trust between you and us. It would serve as proof that we have no interest in "occupation" or controlling another people. All we want is security for our own people.

The reaction to the Israeli pullout from Gaza was an ever increasing shower of rockets of all kinds and of all calibers on dozens of Israeli communities. For more than 10 years, these rockets have been lobbed over our heads. An entire generation of children in the town of Sderot and nearby communities has grown up under the threat of the "red color" sirens. These kids have less than 30 seconds to find shelter. There's an entire generation of children that needs constant psychological care. Thirteen-year-olds wet their beds. Children have nightmares. They never know if they can go to summer camp, and if they can — where. As you know, little Palestinian girl, the Hamas movement took over Gaza after the Israeli pullout. Instead of attacking the rehabilitation of the Gaza Strip and rebuilding the refugee camps and attempting to give the Palestinian people a chance at a better life, Hamas attacked Israel.

Why? Well, that's simple. Hamas is a radical, religious movement whose stated goal is to obliterate Israel from the map. Opposed to negotiations with Israel, it also rejects the agreements signed between the Palestinians and Israel. It has vowed to pursue terrorism — however cruel and monstrous — to destroy the state of Israel. Jews — in Hamas' view — are descendants of apes and pigs. A good Muslim, in their eyes, must persecute and kill Jews everywhere, at any time and at any age. There's no point talking about peace and there's no point talking about coexistence — all those terms belong to the "heretics." Hamas, little girl, wants to kill us. Hamas is the murderous movement that seized the sliver of land where you were born, where you lived and where you suffered until July 12.

So we don't have a lot of choices, little Palestinian girl. And all that is left for us is to try and defend ourselves. For more than a decade, Hamas has been constantly firing those rockets on women and children like you. In the interim, it has tried to commit as many terrorist acts and as many crimes against humanity as it possibly can. The current round of hostilities started when a Hamas cell from Hebron kidnapped three Israeli teenagers on their way home from school. It kidnapped and brutally murdered them. Why? Because they were Jews, that's why.

So I ask myself, little Palestinian girl, how is it that such a large majority of Gaza's residents voted for Hamas? When I watch the mass rallies organized by Hamas in Gaza, when I see its leaders frenziedly screaming slogans calling for death and murder to Jews, and when the masses cheer in front of them, I ask myself: Do all these people, the hundreds of thousands that are huddled there, enthusiastically participating in these pageants of hate and death, really want to kill us? I ask myself, little Palestinian girl, did they succeed in instilling such hate in your tender 5- or 6-year-old soul?

While I write this, the Israeli Cabinet approves the Egyptian initiative for a cease-fire. The IDF has stopped attacking Gaza. Completely stopped. Giving peace a chance, or at least trying to restore calm. How did Hamas respond? By showering a barrage of rockets on dozens of Israeli communities. The people who turned Gaza into a rocket and bomb storehouse, my little girl, want to continue. Sometimes I think that we care more about your fate and the fate of your sisters than they do.

There is, however, one thing I can promise you, little Palestinian girl. Almost all the Israelis would have been horrified and shocked — maybe even shed a tear — at seeing your photo, the one I saw that evening, very late that Saturday night. We, too, have radical, and rather wild right-wingers who yell "death to Arabs," seeking vengeance. But, little girl, they are the minority here. Here in Israel, what we have is the rule of law. What we have are a few million human beings who want to live, wishing the same for their neighbors. Despite everything we've been through, there remains a large majority of Israelis that is willing and supports the establishment of a Palestinian state alongside Israel, in an area that is roughly the same size that was occupied in 1967. Incidentally, you were not yet born then, but if you were told otherwise, it is time to explain to you that there was never a Palestinian state on that land. If a Palestinian state is founded, it will be the first Palestinian state ever. We're in favor of this, but what about you?

I have, little Palestinian girl, one last small question for the end. Would your people be as shocked and saddened by what is happening to us as we were by what happened to you? Unfortunately, I'm afraid that the answer is negative. After all, this has happened to us more than once. Standing in line between boys and girls at dance clubs, Hamas suicide terrorists slaughtered dozens of them. One suicide bomber walked into a Passover traditional dinner at a hotel in Netanya, turning it into a bloodbath. Unfortunately, little Palestinian girl, the adults surrounding you sanctify death. They worship extremism and hate. And even though I've already asked for your forgiveness, I think it is they who should really ask for your forgiveness.

See you in a better world.