Southern Israeli city of Sderot is tired of cease-fires

Fourteen years of rockets have bred hard feelings in the southern Israeli city of Sderot — which range from despair to utter despair — with residents actually hoping for a continuation of the battles, and frustration over the fact that the IDF did not conquer the Gaza Strip. 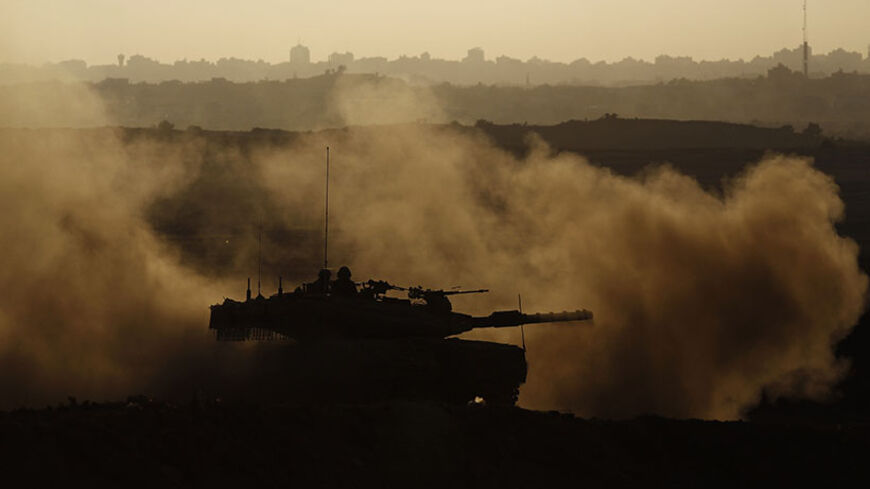 An Israeli tank patrols just outside the border with the northern Gaza Strip in Sderot, Aug. 12, 2014. - REUTERS/ Amir Cohen

SDEROT, Israel — On Aug. 13, the last day of the cease-fire — which was subsequently extended by five days — it's hard not to notice the neglected appearance of Sderot. Three wars between Israel and Hamas within five years have exhausted this city, which has the misfortune to be located in close proximity to Gaza’s bloody neighborhood. Now it’s the afternoon. In less than eight hours the time set for the end of the cease-fire will arrive, the second in less than a week. Residents here live with the feeling that they can’t expect much of life, there’s nothing to expect from peace and nothing to expect from the future. Fourteen years of rocket strikes and thousands of “color red” alarms have bred very hard feelings that range from despair to utter despair.

A few hours before the expiration of the cease-fire, it seems that the busy traffic of the morning hours has calmed down. The roads leading to Sderot and to neighboring communities have emptied, as if residents have rushed to get away from the area. In the three days of the latest cease-fire there has been a sense that life is returning to its usual course. Now, toward the evening, as the clock advances toward midnight, the tension is building up. The city and its surroundings enter a state of readiness for rocket attacks.

Since the war that began a month ago hasn’t yet ended, no one dares taking down the hundreds and thousands of signs hailing the courage of Israel Defense Forces (IDF) soldiers. “Mighty at home, victorious in the front!” — referring to the Hebrew name of Operation Protective Edge, “Mighty Cliff” — is written on one sign where a large Star of David floats above the words. “We all salute IDF soldiers with love,” is written on another sign. In general, in Sderot they don’t like to take down signs. Posters of the mayoral candidates from the elections of October 2013 can still be seen everywhere. Almost a year has passed, most of the candidates have been defeated, but the smile of victory on their faces still adorns the city. In Sderot’s industrial zone, posters of candidates of the elections that took place six years ago are still up.

In the emptying commercial center of Sderot, toward the zero hour, Hemy ben Zikri is putting the finishing touches on the new falafel stand he’s about to open. Until recently, toast and hotdogs were sold here, but customers have now changed their taste.

Of all the conversations I had on Aug. 13 with residents, it seems that Zikri is a unique person who dares to express open optimism regarding what can be expected from the talks with Hamas. “Despair isn’t a work plan for me,” he said, mixing paint in a bucket next to him. “I’m sure that they’ll extend the cease-fire tonight and afterward reach an agreement. Tell me, after 14 years isn’t it enough? Isn’t it time to stop this madness? I’m sure we’re reaching the end. And I’m talking to you as a man who had three children born in the midst of all the mess of the rockets and alarms.”

The residents who still remain in the city move slowly. Most of them are senior citizens who carry themselves with great difficulty. In the waves of escape from the towns surrounding Gaza, young people were drafted, while others fled seeking a safer place, leaving behind the elderly.

Danny Jerabi didn’t “run away,” in his words, to not give Hamas the sense of psychological victory. Jerabi had nine children in Sderot before this place was overcome by madness. In the hours before the expiration of the cease-fire he went into Dudu Cohen’s kiosk to buy cigarettes. In the last month, he's been smoking twice as much. Cohen said that since the battles began, the sales rate of alcoholic beverages and cigarettes has increased due to the alarms and rockets causing emotional tension.

“I mainly sold vodka,” Cohen said. “Understand, Mr. Ben Simon, people drink a bottle of vodka a day to be groggy and disengage from what’s happening around them. When you’re drunk, you don’t even notice there’s a war.”

Cohen and Jerabi hope that Hamas would renew its rocket fire in a few hours, so that the IDF could go back into action. They’re sure that this time they would see the occupation of Gaza. “Only if you go underground and exterminate all the heads of Hamas, is there a chance for quiet afterward. If not, in another year or two rockets will fall again.”

Cohen mentioned that he hasn’t even bothered finding shelter. Whenever an alarm sounded in the last month, he crouched under his store’s counter and waited for the big boom. “I have almost 20 seconds to find shelter. So let’s say I run to a shelter, do you know what will happen when I get back to the kiosk? There’s no register,” he said and burst out laughing, “It’s either the shelter or the register.”

In the last month, Sderot residents have developed an admiration for IDF soldiers. They feel that the soldiers fought for them and died, so they could live in peace. Photos of soldiers from the front adorn many stores.

Most residents think this way. Eliran and Felix, two young men from Sderot, hope for a renewal of the fighting. “Just not another cease-fire,” said Eliran. “Isn’t it a shame? We were in top form and we could have finished them off if we continued to the end. Isn’t it terrible that 64 soldiers died? There’s no other choice. Hamas must be erased.”

Passersby who heard what he said nodded in agreement.