Children from central and northern Israel are now experiencing what residents of the south have suffered for 13 years: the sounds of the alarms, the running for shelter, the ongoing fear and trauma. 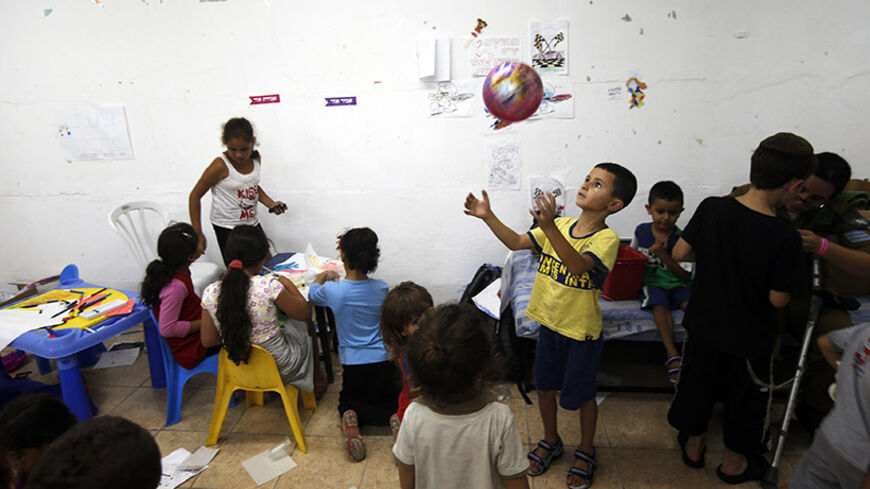 Israeli children play inside a bomb shelter in the southern city of Ashkelon, July 10, 2014. - REUTERS/Ronen Zvulun

SDEROT, Israel — Former Mayor Eli Moyal still recalls the first time a rocket landed in Sderot. He was almost certainly one of the first Israeli citizens to experience a rocket fired from Gaza landing in his town.

One day, he was sitting on his porch, reading the newspaper. “I remember it like it was yesterday,” Moyal told Al-Monitor July 10. ''It was April 16, 2001. I was sitting there, smoking a cigarette and taking in the sunset. Suddenly, I heard loud noises. At first, I didn’t pay much attention to this. There was one boom after another, and smoke billowing up. You have to remember that back then, no one imagined that missiles would ever strike Israeli towns. But then a few policemen came to tell me that missiles had fallen on Sderot. I was stunned. ‘Are you sure?’ I asked them, and they told me that they were. That’s how it all began.”

Since then, about 9,000 rockets of all types have hit Sderot, all fired from Gaza. At first, the whole country was shocked and the local residents anxious. Over time it became a fairly routine occurrence for people living in the south. On two separate occasions in the past few years, Israel has tried to put an end to the rocket fire. It poured troops into Gaza with the explicit purpose of attacking Hamas and eliminating its rocket launchers. Each time, the mission failed.

This may be the third round between Israel and Gaza, but it is different from the previous ones. Throughout its long conflict with the Palestinians, Israel as a whole never became a target for rockets fired relentlessly from Gaza. Now, however, there is hardly a town that hasn’t heard the crash of a missile landing or heard the air-raid sirens.

“It’s ironic,” said Moyal, who served as mayor from 1998 to 2008. “I have siblings who live in the cities of Holon and Rishon and Tel Aviv and Hadera. Until now, they used to call me to find out how my family and I were doing. Whenever missiles were fired at Sderot, my family called on us to calm us down. Now I find myself calling them in Tel Aviv and Hadera to calm them down. We’re experienced when it comes to this. You aren’t yet. But you will eventually understand what it’s like to have rockets falling right next to your home.”

The 9,000 rockets that landed on Sderot claimed the lives of 10 residents. But it is [also] the psyche of the people that pays a most awful price. Almost all the children in the south have grown up with anxiety. It has been imprinted in them from the day they were born. Thousands of sirens have gone off in the middle of the night. There have been thousands of rockets and thousands of explosions. All of this has taken a toll on the innocent happy childhood of those boys and girls, who grew up in a bloody circle of violence, with just brief respites of normalcy.

Over the past few days, I personally experienced the wail of the siren piercing the Tel Aviv sky. All it takes is the sound of the alarm rising and falling to completely paralyze a person. I immediately saw hundreds of people running back and forth, not knowing where to turn. Some stopped their cars in the middle of the road and ran, looking for a place to hide. Some women started shrieking in terror, and others burst into sobs. No one knew where the rocket would fall. None of us knew if these were our last moments on earth. A deafening boom came a moment later. The rocket had landed. Smoke billowed skyward.

On the morning of July 10, I walked down the street in Jaffa. Children at a day camp were making their way to one of the city’s parks. Suddenly, the deafening siren went off just a few minutes before 8 a.m. Once again, people started running aimlessly. Once again, I heard the screams. Children just 5 or 6 years old stood on the sidewalk. They didn’t comprehend the madness of the moment. Fearful for their lives, adults ran for shelter, but the children just stood there, watching helplessly, not knowing how they should respond. An explosion came a few moments later and sent shock waves through the neighborhood. What happened right over our heads seemed like a scene from the movie "Star Wars." The Israeli missile from the Iron Dome air-defense system struck the rocket from Gaza and completely obliterated it. White smoke was all that was left in the sky.

Earlier this week, I saw the cities of Ashdod and Ashkelon sinking back into anxiety. The streets were practically empty and the shops were all shuttered. These two tourist towns had already experienced paralysis in the last war. They had both seen life come to a standstill. Now, thousands of the cities’ children were about to spend the day at the pool, at vacation sites and playgrounds. Buses were waiting to take them to summer camps. It was a few minutes before 8 a.m. when the siren went off again. Suddenly, the two cities looked like ghost towns. The children were sent home and forced to spend almost the entire day in bomb shelters.

“It’s so sad,” Ashdod Mayor Yehiel Lasry told Al-Monitor. "It’s so tragic that they’re robbing these poor kids of their joie de vivre though they did nothing wrong, and though they are hardly responsible for the situation.” Welfare offices are filled with dozens of people suffering from anxiety. Women stand sobbing while they wait to meet with mental health professionals who can help them with the tremors, the anxiety and the depression that they have been facing for the past few days. By the time they recover from one round of rocket fire, the second round is raining down on them. And the sirens don’t stop wailing. There are just a few minutes between one siren and the next.

“My nephew is eight, and he’s traumatized,” says Moyal in Sderot. “He has a hard time falling asleep at night. He’s scared that Arabs will break into his home and kidnap him. He has trouble in school. He has trouble in general, and I know it’s all because of the missiles. Let me ask you: In what other country do people live like this? In what other country do children grow up on the mouth of a volcano? It’s crazy what’s happening here.”

Who would have thought that in Israel, in the summer of 2014, the bomb shelter and the sealed room would become the most important places in the home?