Just a mile away from Gaza in Israel, Sderot residents love their town despite economic difficulties and a year of rocket attacks. 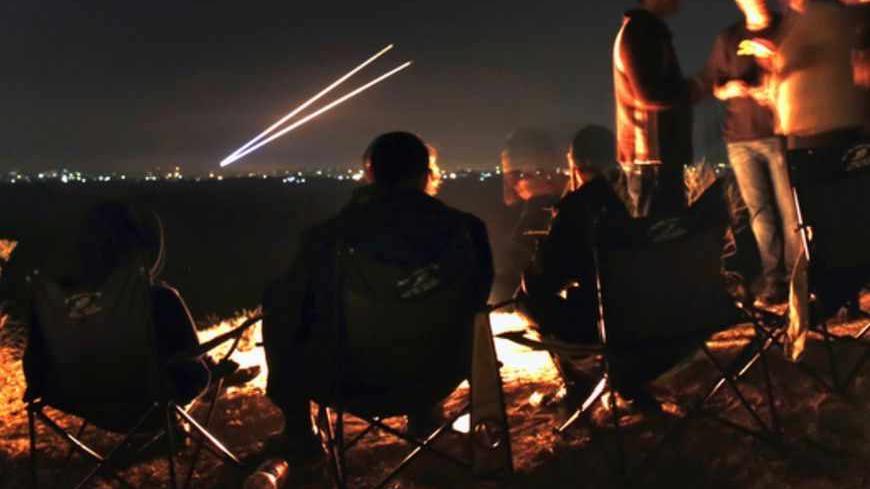 Israeli civilians sitting atop a hill in the city of Sderot watch as two Palestinian rockets fly toward southern Israel, before a cease-fire, Nov. 21, 2012. - REUTERS/Yannis Behrakis

SDEROT, Israel — The Cinema South Festival held in Sderot this week, June 3-6, which attracted thousands of visitors, has brought smiles back to the faces of the merchants in the town’s shopping center. For the first time since the fighting ended in the so-called Operation Pillar of Defense, a relaxed atmosphere prevails over this development town. While its counterparts in southern and northern Israel have made progress and even prospered, Sderot has remained stuck in a cycle of poverty and destitution that it seems unable to escape.

No other town in Israel has been so heavily bombarded by missiles, rockets and mortar shells as Sderot. Any flare-up between Israel and Hamas made Sderot a hostage, at the mercy of the intense hostility between the two sides. A recently released study shows that depression and anxiety cases among the residents of Sderot nearly doubled as the rocket fire on the town escalated since the beginning of the 2000s.

In the last decade, specifically since the second intifada, the neighbors from Gaza fired nearly ten thousand rockets on Sderot. These have become integral to the fabric of life in the town, so much so that a museum was set up there to display thousands of burned-out rocket remains. Before being elected president in 2008, young US presidential nominee Barack Obama was taken to Sderot to see for himself, first-hand, the vulnerability of Israel and its southern residents.

The “rocket museum” in Sderot become another landmark on the itinerary of notable guests and tourist groups, almost on par with the Yad Vashem Holocaust Museum in Jerusalem. Now, more than half a year after the last outbreak of hostilities, Sderot is missing the warmth and love once showered on it.

“The war is over and we have been forgotten,” complained David Cohen, the owner of a kiosk located in front of the theater housing the Cinema South Festival. “Have a look there,” he said, pointing across the street. “Until a few days ago, the vegetation grew wild and high, up to one meter at least. No one tended it and nobody bothered to pick up the dirt from the sidewalk. It was only ahead of the festival that the municipality cleaned up the place, so that the guests do not run away.”

Not far from Cohen's kiosk, a lottery booth stands, managed by Bruria Dadon and her husband Moshe. I first met Dadon at the height of Operation Cast Lead, the previous round of fighting between Israel and Gaza which erupted in December 2008. Surprisingly — or not — each of the two recent operations had taken place only two months before parliamentary elections and came to an end a couple of weeks before Israelis went to the polls. Prime Minister Benjamin Netanyahu emerged the victor on both occasions. In February 2009, he won the premiership and in February 2013, he won again, retaining his seat.

“I have not yet recovered from what I went through during Operation Cast Lead,” Dadon recounted. “How can I forget it?” I had visited her when that war was raging, in my capacity as a journalist. I happened to call on her just as a deafening alarm was sounded. We both ran for a shelter and remained there, hiding and trembling with fear for long minutes, until we heard the monstrous boom of a rocket hitting the ground. We could follow its path as it was flying through the air and landed in an open area several dozen meters away from our shelter. For some hours afterward, our legs were still shaking.

Life is back to normal now in Sderot, and Dadon's love for the town has not diminished. All her children left and moved to the center of the country. Living far away from her grandchildren is especially tough on her, but she would never leave Sderot, as many of the town residents have done.

“We know everyone here,” explained Moshe. “We know everyone who comes to buy a lottery ticket — him and his family. That’s the way here. Sderot is like a family. Life is difficult, but people are willing to give their last piece of bread to help those in need. That’s how it is with us here.”

It's the first day of the new VAT being increased to 18%. Cohen, the kiosk owner, says it isn’t fair, noting that the VAT rise hits the poor and weak, those that are hard up.

“This morning, a Russian woman came to my place with her daughter,” he told me. “She bought a packet of cigarettes and had no money left to buy her daughter a lollipop. My heart was broken. I took her daughter aside and gave her a lollipop on the house. Do you know how many people like that there are, people who cannot make ends meet?”

Eli Moyal dropped in for a visit to the film festival. Everyone knows him in Sderot, as he served two terms as the town's mayor. Now, after a five-year break, he has decided to run once again in the municipal elections to be held in six months.

“When the rockets are fired on you, everyone wants to help you,” he noted, reminiscing. “However, in times of calm, they all forget you.”

He recalled the surge of donations that flowed to Sderot. Politicians, public figures and wealthy individuals visited the town then one after the other, offering moral and financial help.

“It was amazing,” Moyal related. Now, the bustle has died down and they have all gone away, leaving the town languishing in neglect.

When Moyal visited the film festival, they were screening a student film, produced as an end-study project by three students just out of the Sapir College. Not surprisingly, their film deals with the curse of the southern periphery and the desertion of the local residents in favor of central Israel. Students who watched the film voiced their indignation at the underlying pessimistic tone.

“Is there nothing to say to the credit of the periphery?” one of the students asked. Another student noted, in contrast, that nowhere in Israel was there as warm and friendly an atmosphere as that found in the development towns.

While the two argued inside the hall, the construction of the new railroad station continued outside, not far away.

If all goes according to plan, it will be another step forward for the residents of Sderot, in their attempt to get closer to the heart of the country. The new train is scheduled to stop at the entrance to the town and bring passengers to the center of vibrant Tel Aviv in less than 50 minutes. Moyal is troubled by the apparent progress.

“My fear is that people may find out how really close Tel Aviv is and would no longer want to go back to Sderot,” he sighed, only half joking.